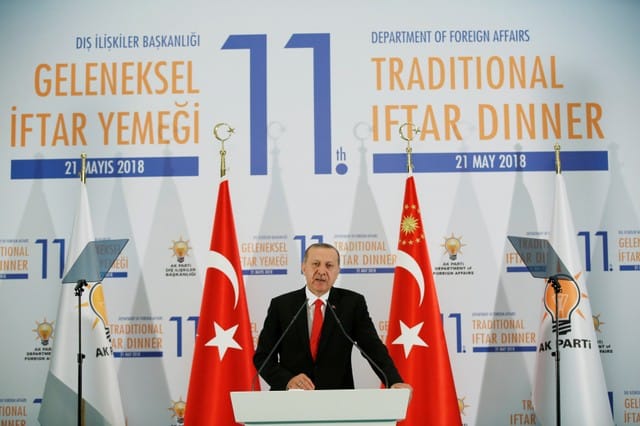 Turkish President Recep Tayyip Erdogan said the blame for lack of progress in the settlement talks was due to the “whims” of Greek Cypriots.

Speaking at an Iftar dinner at the offices of ruling party AKP for ambassadors on Monday evening in Ankara, Erdogan said that due to the whim of the Greek Cypriot side, a solution to the Cyprus problem could not be reached.

Iftar is the evening meal with which Muslims end their daily Ramadan fast at sunset.

The Turkish president said that people are going through a painful period and that no one feels safe in the real sense of the word.

“Solving the problems of the world goes through diplomacy. But lately, this is failing. Due to the whims of the Greek Cypriot community, the distance cannot be bridged for a solution to the Cyprus problem,” Erdogan said.

Referring to the nuclear power station plant in Akkuyu in southern Turkey, the Turkish President said that in 2023 the first reactor would operate.

He added that the world must be cleared of nuclear weapons and that those who have 15,000 nuclear warheads in their hands were a threat.

“We support the peaceful use of nuclear energy. We believe that every country has a right to this,” he said.

Talks for a settlement solution are currently at a standstill in anticipation of the arrival of an envoy of the UN Secretary-General, to probe the potential resumption of settlement talks. The delay reportedly is due to Ankara’s reluctance in giving the green light for the arrival of the UN official, as its attention is focused on next month’s elections in Turkey. The prospect of an appointment of an envoy had been agreed by the two leaders during their first meeting since the collapse of the talks last summer, on April 16.

A proposal by Turkish Cypriot leader Mustafa Akinci some two weeks later as to whether the Greek Cypriot side would accept resuming talks based on the Guterres Framework was left unanswered by the government which argues that Akinci is talking about a different document than them.