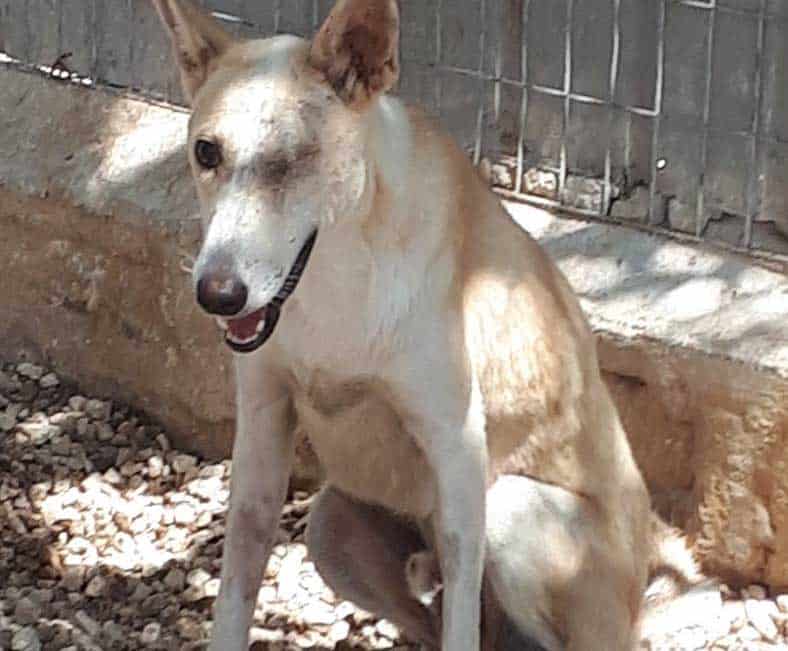 The dog, which lost an eye in the shooting, needs a new home

POLICE in Peyia are investigating two cases in which dogs have been shot in the Cap Saint George area in the last month and said they are taking the matter very seriously.

“We have photographs of the animals and we will find out who is doing this. It is a very serious situation for us and we are treating it as such,” a spokesman at the police station told the Cyprus Mail on Tuesday.

According to police, the first dog was shot around May18 and X-rays revealed he had more than 60 pellets in his head, shot from a relatively short range. He lost an eye in the incident.

The wounded dog was found down an open manhole on the new Cap St. George upper road and was rescued by members of the fire brigade who did not immediately realise that he had also been shot.

“He lost an eye, but by a miracle he survived,” said a staff member at Paphiakos and CCP animal welfare where the dog was treated and being cared. “He is a lovely dog and we are now looking to find him a proper home.”

A second dog was injured on either June 14 or 15 and was found with more than 40 pellets in its body.

“These shots were designed to kill. It’s illegal and despicable behaviour and has caused these animals unbearable suffering,” said Peyia councillor Linda Leblanc.

Leblanc said that the area where the incidents have taken place is ‘quite wild’ with a lot of scrubland and that more dogs may be discovered as police and the municipality are due to visit the area to investigate what is causing an overpowering stench.

“There may be another dog or dogs which are dead in the area. It’s only because of the rescue by animal welfare volunteers, vets and the fire brigade that these two dogs have survived,” she said.

The councillor said that there is a pack of homeless dogs which have adapted to living in the wild in Peyia, and that if there is concern about animals roaming an area, expert charity groups should be called to trap the animals correctly.

“This sort of incident has to be stamped out. Speculation is rife as to who is responsible,” she said.

In addition to the shootings in Peyia, a spate of poisonings is also underway, she said.

Concerns over success of Greek classes for migrant children