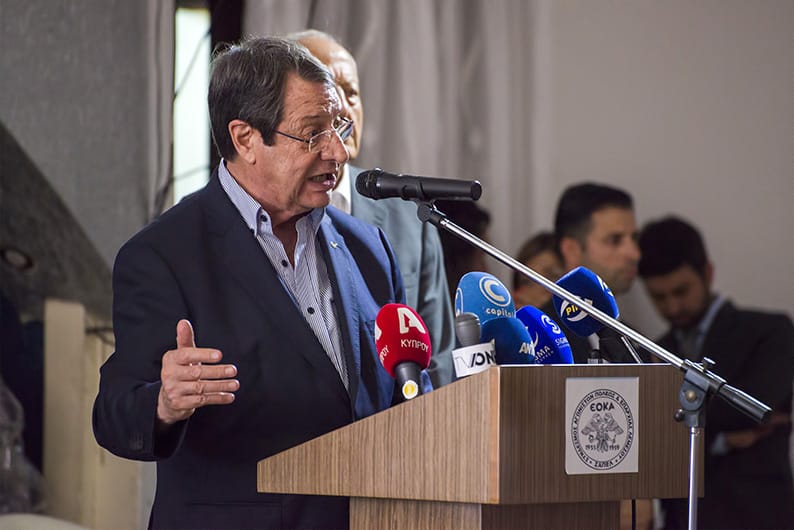 President Nicos Anastasiades said on Sunday that Turkey`s stance led to the deadlock at the Crans-Montana talks last July, and questioned whether any other country would accept the continuation of the anachronistic system of guarantees, or the presence of a foreign country`s army on its territory.

Addressing the Fighters Association of City and District of Limassol (SAPEL) reunion, the president said  Greek Cypriots and Turkish Cypriots must create a viable and functional state, where both communities can live under conditions of peace.

The problem, he continued, was Ankara’s policy of wanting to control the whole island.

“And this is unfortunately the problem we face today and this was the reason why last July (in Crans Montana) a titanic effort to achieve a solution has led to a deadlock,” he said.

Mutual respect was needed between the two communities, he added.

He said Turkey only wanted to continue the anachronistic system of guarantees, as well as unilateral intervention rights, and have a permanent presence of the Turkish army on the island.

The president wondered whether any other country would accept this.

“These are the obstacles we face,” he said, adding however that the Greek Cypriot side was determined to continue the dialogue to reach a solution that would create a state, viable and truly independent, just like the UN Secretary-General had laid out “that is a normal state, functional and totally in line with European principles and values”. Otherwise the state would be a protectorate of Ankara, he said.

“Which political leadership would accept guarantees, unilateral intervention rights, military base, permanent presence of the Turkish army, or the veto right of a community – of which we do recognize political equality – but wants to have even more rights?” he added.

Dismissing the criticism of the opposition on an interview he gave to a Greek news site (lifo), Anastasiades said he had never referred to ‘two states’. “I spoke and talked about the necessary reflection that the Greek Cypriot political leadership should do in the event Turkey continues its claims,” he said.

“What it has to do, he continued, is to reflect on what is going to secure the peace, stability, prospect and the future of our country.”