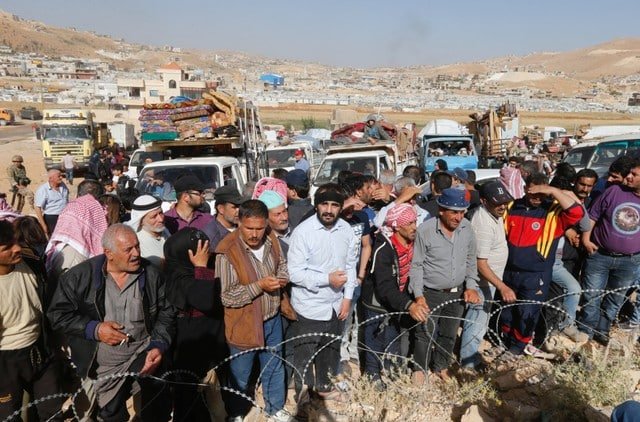 Syrian refugees prepare to return to Syria from the Lebanese border town of Arsal, Lebanon

Nearly 400 refugees started leaving the Lebanese border town of Arsal to cross into Syria on Thursday, a rare case of a return which Lebanon‘s government wants to encourage.

People gathered in minivans and tractors in the morning, loading them with mattresses, water tanks and furniture. Lebanese security personnel recorded the names of Syrians as they passed through a checkpoint on the way out of Arsal.

The refugees were headed for Qalamoun across the border, a region cleared of insurgents by Syrian army offensives in which Lebanon‘s Iran-backed Hezbollah movement played a leading role.

Those leaving said they had submitted their names to Lebanese authorities, who in turn sent the names to Syria for approval from the state.

The convoy makes up a very small fraction of the one million registered Syrian refugees across Lebanon, and of the 50,000 which local officials estimate live in Arsal.

Many said they were happy to be returning to Syria, and while some said their houses were fit to live in, others had heard their homes were destroyed.

“We have been planning to go back for a long time, we are glad things have calmed down,” said Ali Abdullah, 34, leaving with his wife and two young sons. One of the boys was born in Lebanon and had never been to Syria.

“I want to take him back because that is your country, your (home is) not a tent,” Abdullah told his son. He spoke from the same truck he said he drove across the border in four years ago.

Abdullah told Reuters he had heard from relatives in Syria that his house there was fine.

But Murshid Darwish, 55, said she had decided to stay in her tent in Arsal instead of leaving for Syria with her cousin.

“The house needs work, there are no windows, no doors…we cannot live there,” she said. “I cannot carry rocks…once my room is fixed, I will go back.”

The U.N. refugee agency UNHCR said it was not involved in organizing Thursday’s returns, and its team in Syria had so far not been able to access the villages where people were headed.

Major General Abbas Ibrahim, head of Lebanon‘s General Security agency, has said Beirut is working with the Syrian state for the return of thousands of refugees who want to go home.

As Syrian troops and allied forces retake more territory, Lebanese officials have stepped up calls for refugees to go back to parts of Syria where violence has died down.

U.N. officials and foreign donor states to Lebanon have said it is not yet safe for refugees to go back to Syria, where a political deal to end the multi-sided war remains elusive.

The seven-year conflict has driven 11 million Syrians from their homes. More than 1 million have fled to Lebanon, the U.N. refugee agency UNHCR says. The Lebanese government puts the number at 1.5 million, a quarter of the population.

They are scattered across Lebanon, often in makeshift camps and severe poverty, facing the risk of arrest because of restrictions on legal residence and work.

He accused UNHCR of preventing Syrian refugees from going back. UNHCR denies this, saying it supports return when it is safe, and major international donors have voiced dismay at what they called “false accusations”.

“We are working in various ways for the gradual removal of the obstacles that refugees see to their return, including through advocating with the concerned authorities inside Syria,” UNHCR spokeswoman Lisa Abou Khaled told Reuters on Thursday.

“We fully respect individual decisions to return when a refugee decides that the time is ripe for him or her.”

Women ‘must have been trained to kill N. Korean’ in Malaysia