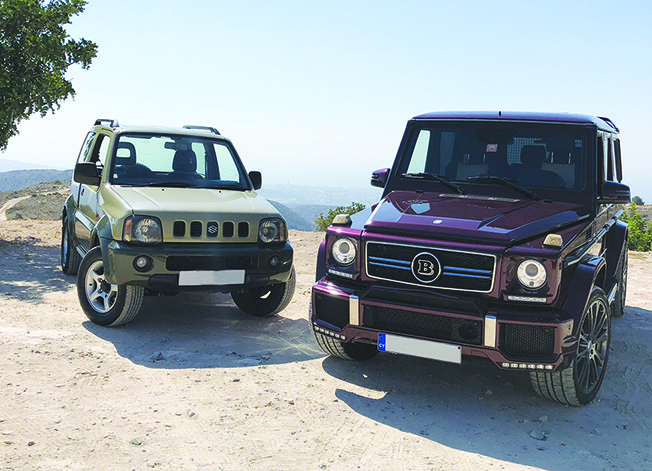 While there is no doubt they cater to very different clientele, the Suzuki Jimny (left) and G63 AMG Mercedes are remarkably similar

I know what you’re thinking: what a waste of time and petrol. After all, the Brabus upgrade system alone added to the already bonkers G63 AMG Mercedes costs more than an entire new 2018 Suzuki Jimny.

In fact, its modified 5.5 litre, twin turbocharged V8 produces more than nine times the horsepower and nearly ten times the torque of the modest little 1.3 in the Jimny.

The G63, or ‘B63’ as Brabus like to call it, could be hooked up to a three-tonne boat and still reach 100km/h two seconds before the Jimny.

Inside, similar contrasts exist. While the Jimny adopts a simple and rugged ‘function over form’ style, the G class is decked out with luxury features including a Harmon Kardon sound system, heated and ventilated seats and so much quilted leather that you would think you were sitting in a Chanel handbag.

To understand the magnitude of the gap between these two I did some calculations and found that, for the price of the G class featured today, you could buy every single one of the ten Suzuki Jimnys listed for sale on Bazaraki as well as 11 brand new ones straight from Suzuki Cyprus.

That’s a whole lot of Suzuki Jimnys for the price of something that, while undeniably fashionable, is basically a more powerful and better equipped rendition of the same car. This begs the question, which car is better value for money? Suddenly, it’s a contest.

Let us start with why I brought these two cars together. While there is no doubt they cater to very different clientele, these cars are remarkably similar. Both were originally introduced in the 1970’s (Jimny 1970 and G class 1979), both have an instantly recognisable boxy shape, both are dynamically suited and designed for usage off-road with low range gearboxes and locking differentials and, while not really relevant to this comparison, it should be noted that both have updated models ready for the 2019 model year.

Even so, both have undergone very little aesthetic changes since the first models were introduced – making them instantly and universally recognisable.

Look at a Mercedes S class from the 70’s compared to today’s rendition and you’ll barely be able to tell they’re the same model. The G class on the other hand has undergone only minor updates and facelifts over the years and hence still closely resembles its military ancestor.

This has had a strange effect on prices and depreciation, with the G class being one of the most expensive cars Mercedes makes – despite the evident lack of research and development costs.

You won’t be able to find a bargain on the second-hand market either, as its unparalleled desirability across the Middle East and Russia have ensured that even high mileage examples retain an enormous percentage of their value.

So how do they drive? Let us start with the Jimny. The model I drove was packing the 1.3l petrol engine, pushing 76hp and 104nm of torque. Measly figures, but then the car is very light.

Still, I found it quite disappointing to drive. I know that this car is designed primarily for usage off-road, but the reality of most ownership situations is that they will be driven far more on road than off.

While the car fairs OK in traffic with a smooth and trustworthy automatic gearbox, it struggles on the highway – especially if the AC is on.

Furthermore, I am told by its owner that fuel consumption is pretty dismal and by Suzuki themselves that they stopped importing it over three years ago due to the absurdly high road tax (€450/year).

Saying that, for occasional use as a beach car, the Jimny is all you need. Enough punch to get you to the sand and trusty 4WD to get you around once you’re there. Put simply, it does what it was designed to do well but is pretty substandard at everything else.

Onto the G class. Once again, despite its proven capabilities, this car will rarely be tested off road. It is much more likely to spend time parked at coffee shops and hotels around the island than it is rock crawling.

Still, it’s nice to know that the capability is there. So how does it drive? Straight off the bat, the steering is awful. Genuinely one of the worst-handling cars on the road. To this day I do not know how they ever let these cars leave the factory.

Also, on these gargantuan 22-inch Brabus rims, the ride is not what you’d call smooth. Mercedes is obviously aware of this as early reports suggest the new rendition of the G class – available to order right now from Mercedes Cyprus for €212,000 – is a massive improvement on the handling front.

Noticing these flaws, however, can be tricky. Thinking about anything other than the colossus under the bonnet is genuinely hard. It has so much power. What’s more, it doesn’t feel like it makes any sense.

It is one thing to have this kind of power in a tricked-out, ultra-low supercar. But 700hp+ in something that feels and looks like a house with wheels is certainly an odd recipe for fun.

Sure enough, flooring the throttle is like nothing else I have ever experienced. The Brabus G63 doesn’t care about physics – nothing this boxy, high and heavy should be able to pull like it does, yet its near 1000nm of torque ensures that this car, despite having the drag coefficient of a small building, will outrun most Porsche 911s. Absurd.

Then there is the sound. Intoxicating in every sense of the word. Think of an angry lion; deepen the tone and increase the volume. Add the whirr of a couple of turbochargers and you’re just about there.

AMG have long been famous for their exhaust notes, and in this application Brabus have unleashed even more of that monstrous V8. What’s more, the side-mounted tailpipes ensure that every time you drive past a parallel tree or building you are instantly reminded of the behemoth that lies under the bonnet.

Just a mild squeeze of the throttle and it comes to life, roaring all the way through the rev range as you’re pinned into your truck-like driving position. It really is a unique experience.

The Verdict:
The Jimny is a plucky little car that is irresistibly likeable. If you’re in the market for something small and cheap that can handle a beaten track then there’s not much better.

Just don’t try and drive too far on the road.

As for the G class, I can find 100 reasons not to buy this car. Need a serious off-roader? Land Rover Defender. Want some luxury with that? Get a Range Rover. How about some speed and handling? Try a Porsche Cayenne.

On paper, there is pretty much no reason why anyone would ever buy this car. Except one. It’s a G class. A Geländewagen. A Benz truck. Call it what you will, the G class has become unfathomably desirable.

Is it the high driving position? The side exhausts? Or maybe the fact that the Sheikh of Dubai refuses to drive anything else. Whatever it is, G class sales have outperformed even Mercedes’ own predictions in recent years.

In terms of raw value for money, the Jimny wins. It might not sound or look the part but it’ll get the job done for a fraction of the price, and the new model (available to order in Cyprus soon) promises improved efficiency and dynamics.

As for the G class – just because I am aware of the unexplainable appeal does not mean I am immune to it. Some will never understand and that’s fine – there are many better value cars on the market for them.

But for those who get it, for those who understand why this clunky, chunky off–roader has become the hottest accessory on the road, the G class will always be king. 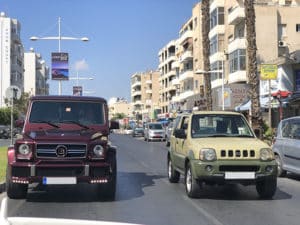 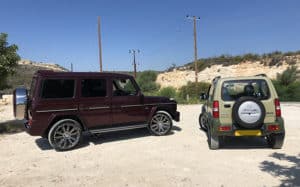 Osaka makes history at US Open, to meet Williams in final