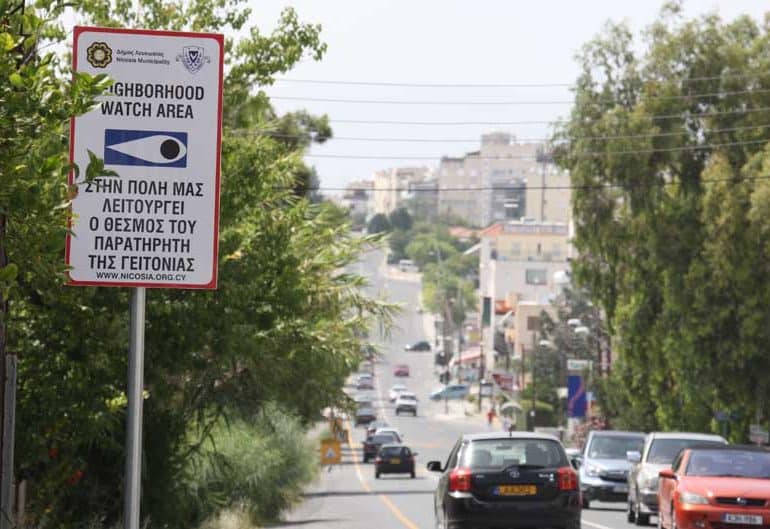 A neigbourhood watch scheme in Nicosia. A similar one will start in Peyia

A new state-organised neighbourhood watch scheme for Peyia will finally be launched in October, according to officials.

Chief inspector Petros Pattouras, head of crime prevention at police HQ in Nicosia, told the Sunday Mail that the move is an important one for Peyia, as it is the last remaining municipality in Cyprus without an operational state scheme.

Peyia is home to a large resident expat community and is also popular with tourists and people purchasing holiday homes.

“We are waiting for them (municipality) to let us know when they are ready to begin. We have nearly all of Cyprus signed up to neighbourhood watch,” he said.

The chief inspector said that more than 100,000 people are already involved in the initiative nationwide.

Local Peyia councillor Linda Leblanc told the Sunday Mail that a previous flagship scheme, operated voluntarily by residents, had to disband a couple of years ago, following a government decision to establish neighbourhood watch schemes all over the island that placed their control under the local authorities, which were to manage and fund them in cooperation with police.

The mayor of Peyia, Marinos Lambrou, promised that the state neighbourhood watch as a campaign pledge and he is making good on it, albeit after a delay, said Leblanc.

“It has taken longer than originally thought, and we had to gain expertise, learn and look at how other countries do. This has all been a part of it,” she said.

The neighbourhood watch scheme is to be launched in around mid-October.

The chief inspector said that the scheme will improve not only crime prevention but also the daily lives of residents.

“We have to deal with this matter seriously and this is why I have had meetings in Peyia with both the mayor and the council.”

Police will first inform residents about crimes committed the area and ask for information, and residents will report any suspicious or unusual activity to police. At the same time, volunteers will take part in ‘safety walks’ to observe anything out of place.

“These are not ‘patrols’ as such, he explained, but depending on the area and if there are volunteers to do this, it can be very helpful,” he said.

The state-organised neighbourhood watch scheme got underway in Dhali in 2011 and has since spread to all of the towns and most villages, he said.

Leblanc said that the move is being welcomed by residents of Peyia who will be able to obtain a form from the municipality to complete and subscribe to the project.

They will then be able to receive mobile text messages – in Greek or English – with the latest information.

“They will also be issued with a card from the police which states that they are a member of Peyia neighbourhood watch,” she said.