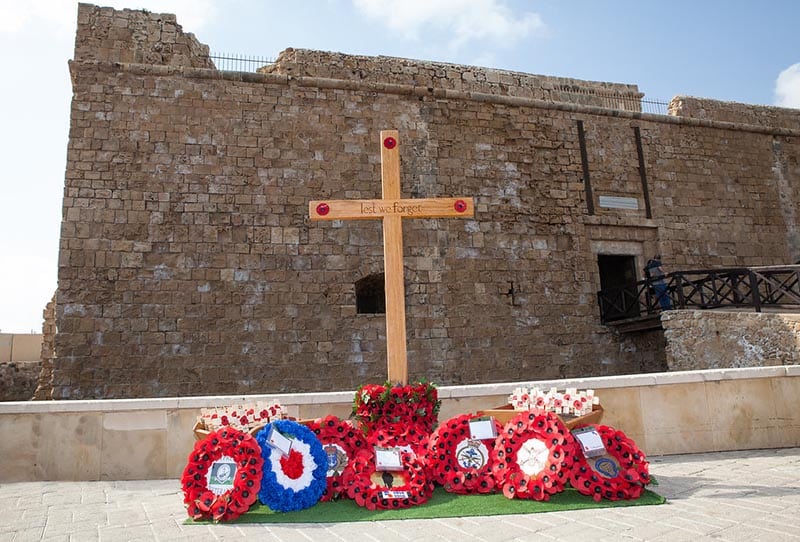 In exactly a week, we honour the fallen: the men and women who gave their today for our tomorrows. On the 11th hour of the 11th day of the 11th month – a time and date which commemorate the formal cessation of hostilities in 1918 – we recall all those who died not just in The First World War, but in conflicts great and small around the world.

This year, the date is particularly special. Not only does November 11 actually fall on a Sunday (thus neatly coinciding with Remembrance Sunday ceremonies) but it also marks the centenary. One hundred years on from the end of the Great War, nations everywhere will hold services of remembrance, laying wreaths at war memorials, cenotaphs, and churches. Even here, in the bright and sunny Mediterranean, we pay tribute to those who fell in the dark days of war: the many Cypriots – Greek and Turkish alike – who signed up of their own free will; over 16 000 in WWI (roughly 25 per cent of males of military age, the majority of whom joined the ranks of the indispensable Macedonian Muleteer Corps), and the more than 30,000 who served with the Allied Forces in WWII.

While each nation honours its dead in its own way, perhaps one of the most universal means of remembrance is the Poppy Appeal. Operating since 1921, and commemorating military personnel killed action, the poppies of this charitable Appeal have long been associated with battlefields, and were the notable element in John McCrae’s famous WWI poem, In Flanders Fields – three poignant verses which speak volumes.

Created and distributed by The Royal British Legion (TRBL), a charity which provides financial, social and emotional support to veterans, these paper poppies are made by ex-forces personnel – a practical way of supporting those who have been injured in service. But the good they do doesn’t stop there. While the very first Poppy Appeal – using silk poppies made by widows in France – raised £106,000, today, millions of pounds are raised by the 50,000,000 poppies distributed worldwide annually. The poppies go to over 120 countries, including Canada, Australia, New Zealand, South Africa, Spain, France, Germany, Malta, Sri Lanka, Hong Kong, Argentina… And, of course, Cyprus, where our four local branches of The Royal British Legion are accountable for their distribution and the consequent disbursement of the monies raised.

“The four branches – in Limassol, Larnaca, Kyrenia, and here in Paphos – are responsible for the approximately 300,000 poppies sent to the island each year,” explains David Perry, Honorary Branch Secretary of The Royal British Legion Paphos Branch and retired Lance Corporal of the Royal Engineers. His is the newest of the branches on the island, formed just five years ago (the Limassol Branch is the oldest, at three decades in age), but nonetheless an integral part of ensuring the success of the Poppy Appeal in Cyprus.

“In our entirety, we distribute the poppies to hundreds of outlets across the island, including 184 in Paphos alone,” David reveals, mentioning the Hospice Shop in Polis, the Phoenix Club, and the majority of local hotels as a few of the places the poppies can be found. “The number of outlets is increasing year on year,” he continues. “We used to go round and ask if various shops and the like would take a box; 30 years on from the launch of the Poppy Appeal in Cyprus, we find they’re ringing us and asking! We’ve raised,” he adds, “a great deal of money over the years: hundreds of thousands across the island; €16,257 last year in the Paphos district alone.” 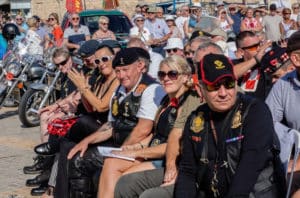 The money from the Appeal stays right here in on the island, used to assist ex-forces, ex-forces’ widows and dependants, some serving forces, and members of the Cyprus Veterans Association. “Owing to confidentiality, the number of people we’ve helped over the years is very hard to estimate,” David explains. “But rarely a month goes by without myself, my wife Chris, or Allan Hodgson our padre” – the three designated TRBL Welfare Case Workers for the Paphos District – “assisting with anything ranging from the purchase of medical equipment to funeral expenses, travel necessities, home and hospital visits, or quality of life care.

“I think all of TRBL case workers on the island feel a lovely sense of satisfaction from being able to help others. And it also brings real joy to the heart to see people wearing their poppies at this time of year: you realise that people do remember, and the memory of those who have fallen will hopefully prevent conflicts from happening again. TRBL are the custodians of remembrance,” David adds, “so we’re also responsible for the Remembrance Day Services across the island.”

He himself usually attends the Service at the Paphos Fort, an event which – though only in its fourth year – is thought to be the biggest in the Mediterranean, with more than 2,500 people in attendance last year. Presided over by Paphos Royal British Legion Padre A. Hodgson, who is assisted by the Reverend G Hill, the service echoes those held worldwide on Remembrance Sunday, with hymns, readings, the Exhortation (‘They shall grow not old, as we that are left grow old. Age shall not weary them, nor the years condemn. At the going down of the sun and in the morning. We will remember them’), the playing of the Last Post, two minutes’ silence, reveille, and a reading of the Kohima Epitaph, before wreaths are laid and prayers are said.

“As the numbers have risen, we’ve been overwhelmed by the support for the Poppy Appeal here in Cyprus,” David smiles. “Those without often buy their poppies on the way in; in 2017, we filled five or six collection tins! It’s really a very important charity, and gives us the only income for welfare we have all year. And,” he concludes, “it helps all of us, whether we’ve lost loved ones or not, to remember the sacrifices of others. Lest we forget…”

The Poppy Appeal
For more information email [email protected] The Remembrance Service at the Paphos Fort will take place this coming Sunday, from 10am. All are very welcome. Poppies are also available at The Cyprus Mail offices. Call 22 818585 for details