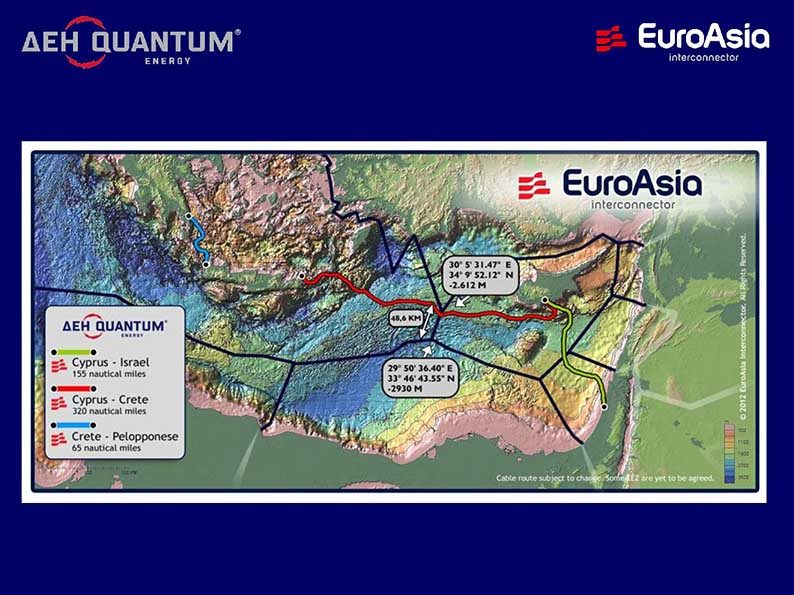 The final stage of raising capital for the project has been reached, EuroAsia Interconnector Limited, the promoter for the mooted subsea cable that will connect the electricity grids of Israel, Cyprus, Crete and Attica in Greece to the European system, has said.

In a press release, the project promoter said it is “in the final stage of concluding these actions in collaboration with strategic investors, through a capital increase and bond issue to safeguard the capital and financial closure for the construction of the entire Cyprus-Crete-Attica interconnector, with a total development and construction cost of €2.758 billion.”

It noted that the EuroAsia Interconnector, as an EU Project of Common Interest (PCI), is eligible to receive grants of up to 50 per cent of the total construction cost (including the Crete-Attica link) from the Connecting Europe Facility (CEF) and additional facilities from the European Investment Bank (EIB) and other EU institutions.

According to the promoter, the project has “drawn the interest of all major European manufacturers with proven global experience in this field, the participation of whom reinforces the multilateral efforts for successful implementation of the project.”

“Specifically, the pre-selection stage has been completed and the candidates have been informed about the results. Pre-ITT [Invitation to Tender] documents submission meetings with the successful candidates are being held in early December at the EuroAsia Corporate Headquarters in Cyprus and the results of these meetings will be incorporated in the final Invitations to Tender documents including all technical, commercial and legal requirements to be issued.”

On the timeframes, the commissioning dates for the first two segments of the interconnector have been set for June 2022 (segment connecting Crete and the Attica region), and December 2023 for the segment connecting Kofinou, Cyprus to Crete.

In June this year, the government issued a notice for the expropriation of land for the interconnector’s direct-current converter station.

Asked to comment, energy analyst Charles Ellinas said the EU has shifted funding priority of PCI projects to electrical and renewables projects, at the expense of fossil fuel related projects.

“Among these, Interconnectors get priority. The fact that the EU has approved a grant covering 50 per cent of the construction costs of the project improves its viability.

“Hopefully, as and when the Interconnector is built, it will be used to transmit electricity for the benefit of Cyprus and even help bring electricity costs down. It could also encourage the development of renewables at larger scale.”