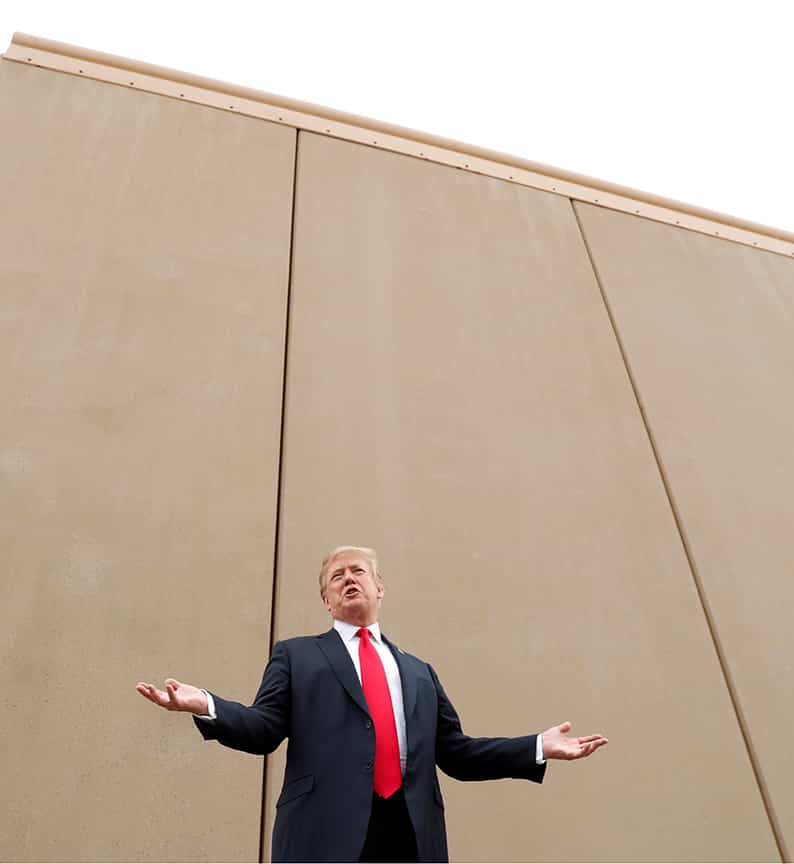 President Donald Trump will make his case to Americans on Tuesday that a wall is needed to resolve a “crisis” at the US-Mexico border, trying to make good on a campaign promise in a dispute that has sparked an 18-day partial government shut-down.

Trump’s prime-time address, scheduled for 9 pm (0200 GMT Wednesday) will be the Republican president’s latest attempt to persuade Democrats, not to mention furloughed government workers, to back his push for a steel barrier on the southern border.

He has long maintained that such a wall is needed to stem the flow of illegal immigration and drugs, and in recent weeks has made the issue a priority. Democrats, who now control the House of Representatives, have consistently opposed it, calling it an expensive, inefficient and immoral way of trying to resolve immigration issues.

The dispute over wall funding – with Trump demanding $5.7bn to help build it – led to failure last month to agree on funding for parts of the federal government.

Trump’s remarks from the White House will also aim to shore up support among Republican lawmakers, who are wary of potential backlash from the public as the effects of the shutdown intensify. Vice President Mike Pence was scheduled to meet with Republican lawmakers later on Tuesday, before Trump’s speech.

In television interviews on Tuesday morning, Pence said Trump would tell the American people that there is “a humanitarian and security crisis” at the border.

The administration’s casting of the situation as a crisis comes as Trump considers declaring a national emergency, which would enable him to bypass Congress’ mandate to approve federal spending, and to build the wall without its approval. Democrats have shown no sign of giving way on the demand for wall funding.

Pence did not say whether Trump had made a decision or if the White House had completed its legal review of such a declaration, which would likely face an immediate legal challenge.

“We believe we can solve this through the legislative process,” Pence told CBS, urging Democrats to negotiate.

All major US television networks agreed to broadcast Trump’s speech, prompting Democrats to seek equal air time. CNN, CBS, NBC and FOX said they would give Democrats time to respond on-air, while other networks did not respond to requests for comment.

Democrats have said they support increased border security measures such as additional US border agents and technology, but have rejected the administration’s claims about the security risks at the border.

Trump will continue pressing his case with a trip to the border on Thursday.

Pence said on Monday that progress was made in weekend talks that he led between administration officials and congressional staff over how to break the funding impasse and reopen the government.

Trump has invited congressional leadership back to the White House this week for more negotiations, Pence told NBC, but gave no other details.

Federal employees will feel the pinch on Friday, when they will miss their paychecks for the first time, unless a deal is reached. The shutdown is also affecting national parks, airline security screening, housing and food aid, and economic data.

Trump made his promise for a wall a signature campaign issue in his 2016 White House run. He said Mexico would pay for it, although Mexico was always clear it would not, and has now turned to Congress for the money.

In rejecting Trump’s demands, Democrats also point to the Trump administration’s controversial handling of families and other migrants from Central America at the border. Critics have decried the previous separation of children from families, the use of tear gas and the death of two sick migrant children.

The House passed a bill last week to reopen the roughly one-quarter of US government that has closed while continuing talks on border security, but the Republican-led Senate refused to consider it, citing a lack of support from Trump.