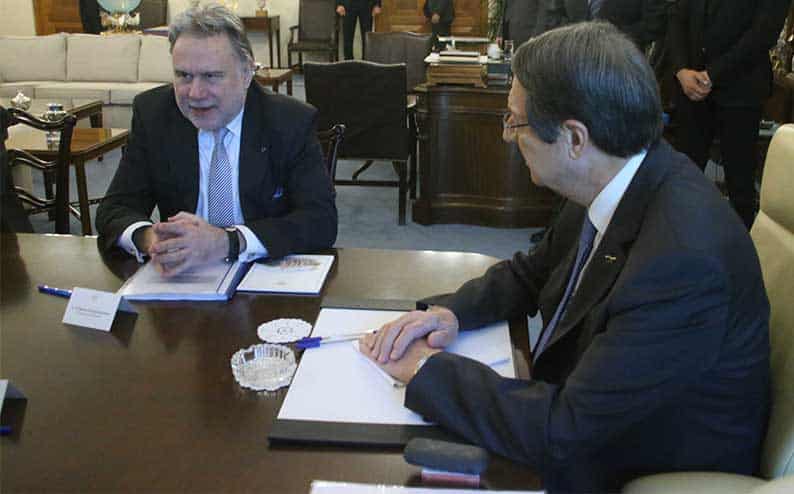 Greek Foreign Minister Giorgos Katrougalos has said that Turkey cannot be excluded from energy-related issues in the Eastern Mediterranean area the Anadolu News said on Wednesday.

“How can one exclude Turkey from an area in which it has a coastal line of many kilometres?” Katrougalos asked in the interview he gave ahead of his meeting on Thursday with his Turkish counterpart Mevlut Cavusoglu in Antalya.

He said that Greece supports the rights of Cyprus in its exclusive economic zone, adding however: “of course that doesn’t signify a monopoly over the whole Eastern Mediterranean area.”

Referring to the tripartite cooperation between Israel, Cyprus and Greece, Katrougalos said that they would like Turkey to participate in these negotiations “that respect international law and sovereign rights.”

The minister also made a reference to Turkey’s actions in the Eastern Mediterranean.

“The important thing is to avoid unilateral military movements, especially those that increase tension,” he said. Last month over 100 vessels took part in Turkey’s ‘Blue Homeland’ military exercise. The drill encompassed the Black Sea, Aegean and the Eastern Mediterranean.

Katrougalos also said that Greece is testing the waters to see if it is possible to resume the settlement negotiations on the Cyprus problem between all parties, the news agency said.

“We want the negotiations to begin. But they should be negotiations that have a chance of reaching an agreement, and not just for the sake of negotiating. We are committed to this because we want a solution for the Cyprus issue,” he said.

Katrougalos was in Nicosia on Tuesday for a series of contacts ahead of his meeting with Cavusoglu. He said that would seek to hear from his Turkish counterpart specific positions on the replacement of the guarantees system on Cyprus as Turkey has not laid her cards on the table yet as to the issue.

Greece wants is to launch an honest, informal preparatory dialogue and seek specific answers from Turkey to achieve progress, he had said.

Meanwhile, Turkey’s Energy and Natural Resources Minister, Fatih Donmez, said in another interview with Anadolu Agency that the Greek Cypriot side’s attempts to acquire all of the island’s natural resources for its own economy were wrong.

Donmez said that the Greek Cypriot side should be focusing on a win-win model for both sides.

“The Turkish Cypriots have their own rights and interests which must be protected,” he said.

He added that the north has issued its own exploration licences and expressed hope Turkey would be making its own natural gas discoveries.

“I hope the other side sees this and focuses on a model that will benefit everyone,” he said.

Donmez anounced that drilling for a second well had started off the coast of Adana and that their aim was to conduct drilling at four locations with two ships in the next 12 months.

Turkey, just like the Greek Cypriots and other neighbouring countries have done, aims to discover its own natural gas reserves in the region, he said.

Coronavirus: no more need for gloves unless job required them prior to pandemic

Arrivals to UK from Cyprus no longer need to self-isolate