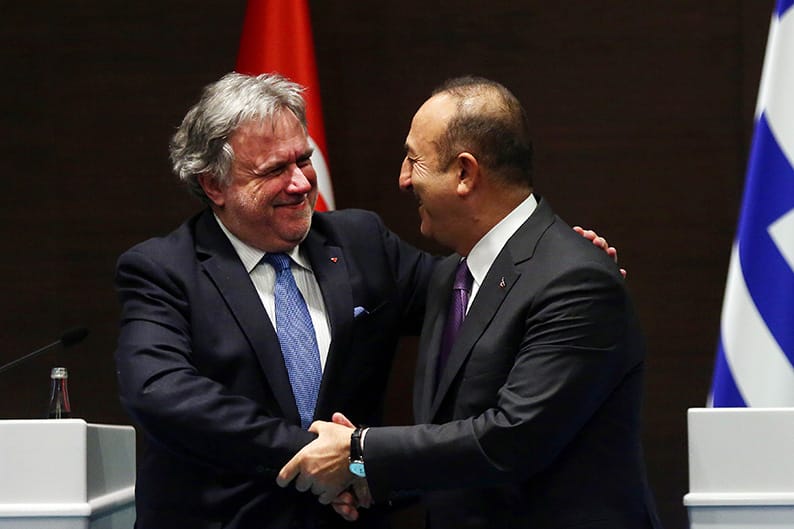 Turkish Foreign Minister Mevlut Cavusoglu on Thursday said that not only were guarantees not anachronistic but ever since unilateral drilling started by the Greek Cypriots, they were more necessary than ever.

He was speaking after a meeting with his Greek counterpart, Giorgos Katrougalos in Antalya where they discussed the Cyprus problem, among other things.

Katrougalos said he would meet again with Cavusoglu on April 12 in Greece where the Turkish side would brief Greece on its positions on the system of guarantees and take it from there “step by step.”

He said they would discuss in their next meeting the confidence-building measures (CBMs) and that they agreed on a first informal exploratory meeting on where the two sides stand as regards the Cyprus problem.

The statements of the two ministers were in complete opposition on the system of guarantees and the talks in Crans-Montana, which collapsed in the summer of 2017.

Katrougalos reiterated that for Greece, the Cyprus problem was above all a matter of international law.

Greece, he said, focuses exclusively on the international dimensions of the Cyprus problem, and believes that governance issues should be resolved between the two communities.

“Our own standing positions are the abolition of the anachronistic system of guarantees and the withdrawal of troops,” Katrougalos said.

He said the aim of the next meeting was not to negotiate on these issues but to hear what the other side thinks.

“We have agreed on starting, step by step, to hear the ideas on the mechanism that could be in place ‘the next day’ [after a solution] that could replace guarantees, assuming that all other internal issues have been resolved,” Katrougalos said.

Cavusoglu countered that guarantees were not anachronistic, “because we see the unilateral drilling activities. For that reason, Turkey’s guarantee rights are more necessary than ever.” He was referring to the energy programme of the Republic of Cyprus to which Turkey opposes as it feels it excludes the Turkish Cypriots from the decision-making process and trespasses their rights.

Cavusoglu said that President Nicos Anastasiades had initially accepted the political equality of Turkish Cypriots, but has been rejecting it since the talks in Crans-Montana. Therefore, he said it is not realistic to claim guarantees are outdated.

He said that the conference on Cyprus in Crans-Montana failed because Anastasiades took a step back over concerns he had also explained to Cavusoglu.

“After an unsuccessful conference, it is a waste of time and energy to pick up from where you left off,” he said, adding that that was out of the question.

Turkey will continue these informal meetings to decide what to discuss and which the framework will be if new talks start, he said.

Katrougalos said that there had been progress at Crans-Montana, since the international dimension of the Cyprus problem was put on the table for the first time.

He said the reason Greece was against guarantees and wanted them replaced was because they give “a unilateral possibility” of being used only by Turkey. “For the sake of avoiding escalation of tension, it does not mean we will sweep the problems under the rug,” he said, adding that there were disagreements that needed to be addressed through political dialogue.

He said that the sovereign rights of the exclusive economic zone of the Republic of Cyprus are for both communities and recalled that the Cypriot parliament recently passed a law on the establishment of the Hydrocarbons Fund that will manage proceeds from the exploitation of natural gas. The Fund was a guarantee, he said.

On energy, he said that each country has its rights within its EEZ recognised by the international law of the sea.

He said Greece believes Turkey has rights in all matters concerning itself. On the matter of energy, “we have defended the right of Cyprus to manage the resources of its exclusive economic zone for the benefit of both communities,” he added

Cavusoglu said he agreed that Turkey should not be excluded, adding that any programme that does not involve Turkey does not apply. “Turkey has rights under international law,” he said.

Since Anastasiades accepts that the Turkish Cypriots have rights but they would not be guaranteed, he said, Turkey started its own exploration activities after receiving licence from the breakaway regime and will begin drilling in the near future.

Turkey, he said, has a duty to safeguard the interests of the Turkish Cypriots and this is a responsibility stemming from international agreements and the international law.

The agreement between Katrougkalos and Cavusoglu to arrange a meeting for April 12, in Athens,  during which the international aspect of the Cyprus problem will be discussed is an important development, Foreign Minister Nikos Christodoulides said later.

Christodoulides said that he was briefed by Katrougkalos on the outcome of his discussions with Cavusoglu.

The April 12 meeting was a step the right direction, Christodoulides said, adding: “We also consider that certain symbolic confidence-building measures between Greece and Turkey may also help create the right climate.”