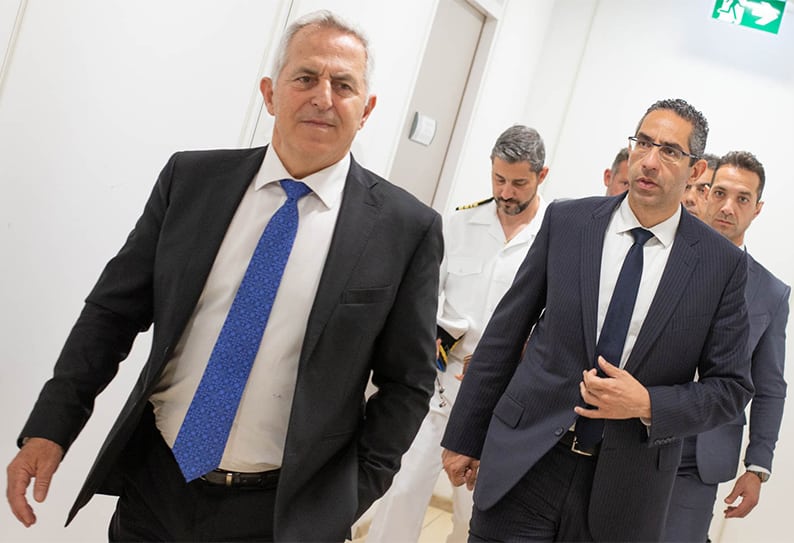 Cyprus will not get dragged into any actions that create tension in the region, Defence Minister Savvas Angelides said on Wednesday, as the government embarked on a diplomatic drive to inform EU members of Turkey’s violations inside the island’s exclusive economic zone (EEZ).

“In line with our established approach, fully composed, we will not be dragged into actions that lead to tension in the region,” Angelides said.

Angelides discussed the matter with his Greek counterpart, Evangelos Apostolakis, during a scheduled meeting that is part of regular contacts between the two countries.

The Cypriot minister said Cyprus’ calm should not be perceived as a weakness, as Cyprus was coordinating with Greece and the EU, as well as other friendly countries.

“Cyprus and Greece have been established in the minds of the international community as pillars of stability and credibility in our region and as EU member states we aim at further bolstering the role we have assumed to tighten relations between Europe and the Middle East,” Angelides said.

Turkey has issued a navigational telex, announcing its intention to start drilling off Cyprus until September 3. Drillship Fatih is in an area west of the Akamas peninsula within the EEZ and continental shelf of the Republic of Cyprus.

According to the presidency, Anastasiades will raise the issue of Turkish actions in the EEZ following the strong protests that have been made.

The president will also hold bilateral meetings with heads of state and government of EU member states.

Nicosia is also considering asking the EU to squeeze Ankara on the matter of the EU-Turkey customs union, or blocking Ankara’s access to EU pre-accession funds.

Russian ambassador Stanislav Osadchiy said on Wednesday that Foreign Minister Sergei Lavrov will be visiting Cyprus sometime this year but the visit did not appear to be related to developments in the area.

The ambassador said Lavrov had been informed of the issue in the Eastern Mediterranean and was in touch with his Cypriot counterpart Nikos Christodoulides from the first moment.

“We think that during this difficult time in this region any step that undermines the potential for negotiations must be avoided,” Osadchiy said.

“We really believe that all differences can be resolved at the negotiating table. We support this and hope something is done as soon as possible that would lead to a solution of the Cyprus problem.”

The ambassador said Lavrov is scheduled to visit Cyprus but no date has been set yet. He expressed hope that the visit will take place this year.

In a comment on the developments, Stratfor think tank said reunifications talks were unlikely to make progress anytime soon.

“It also means Cyprus’ efforts to explore for energy in the disputed waters will continue to face disruptions from Turkey.”

For the European Union, the standoff adds yet another notch to its deteriorating ties with Turkey, Stratfor said, but the bloc was unlikely to introduce any meaningful sanctions against the country, especially as the EU will need to maintain some degree of cooperation with Ankara to keep migration flows under control.

On Tuesday as Fatih remained stationary and did not carry out any drilling, Greek Foreign Minister George Katrougalos and Apostolakis denounced Turkey’s attempted illegal drilling in Cyprus’ EEZ.

The vessel and three support vessels are located about 60km west of Paphos, well inside Cyprus’ EEZ.

The Turkish energy ministry said in an announcement that the country and the north cannot be excluded from the energy equation in the region and called on all to benefit from Turkey’s win-win approach. The ministry argued that Turkey’s activities in the Eastern Mediterranean stem from international law and that it is not possible to accept declarations made by internal and external factors about Turkey’s activities on its own continental shelf.

Cruise down to Limassol boat show 2019

Coronavirus: less checks carried out, nobody booked in Paphos