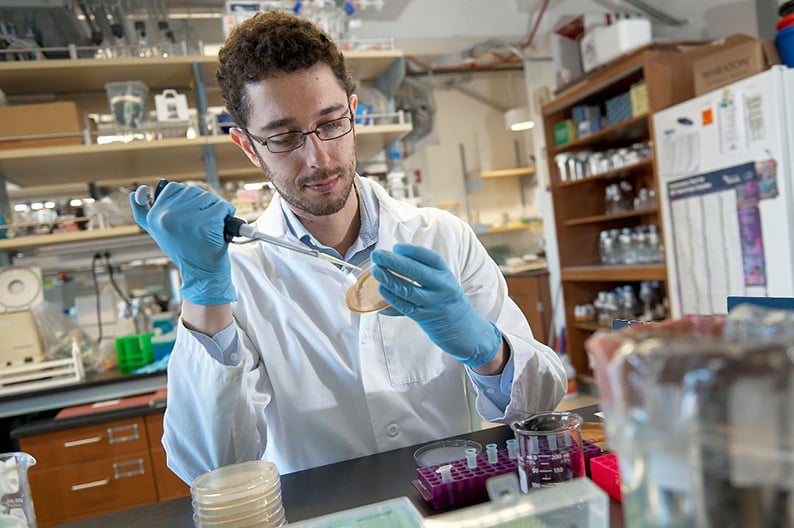 One of the most competitive post-doctoral funding fellowships in the world has just been awarded to Cypriot researcher Andrew Santiago-Frangos. He is one of a select few to get this prestigious funding and very likely the first Cypriot.

The Life Sciences Research Foundation (LSRF) fellowship is open to all US citizens and non-US citizens working in a lab based in the US. More than 1000 applications are received each year from very talented scientists and laboratories.

From this pool of competitive applicants, the LSRF seeks to “identify and fund exceptional young scientists at a critical juncture of their training in all areas of basic life sciences”, selecting 50 finalists.

“It varies from year to year, but roughly 25 of the original 1000 applicants eventually get funded,” Santiago-Frangos said.

“In in all my years with LSRF I cannot recall another fellow who was a Cypriot,” assistant director at LSRF Susan DiRenzo told the Sunday Mail.

The award is for a total of $186,000 over the course of three years. This amount includes the researcher’s salary as well as research allowances such as laboratory supplies and travel to conferences.

In addition, all current fellows meet at a dedicated annual conference to present their work and exchange ideas with other talented scientists in diverse fields of the life sciences.

The LSRF does not have an endowment themselves, instead companies and foundations that have chosen to sponsor the fellowship will review and choose, from the 50 finalists, a young scientist whom shares common research interests.

The researcher says he did not at all expect to be selected.

“I was honestly dumbfounded. I shouted at Dr. Blake Wiedenheft [at whose lab he works], who was down the end of the hall, ‘I think I got it! I think I got the fellowship!’. I had to ask him and a fellow lab mate nearby to double check the notification email with me because I was unable to fully comprehend the email in my shock. I did not truly expect to receive the fellowship and was already preparing to write an application for a different funding source.”

Santiago-Frangos, who turned 29 earlier in May, has a Puerto Rican father and a Cypriot mother. He was born in New York, but was mostly raised in Nicosia, from ages 8 to 18. From an early age he attended the Junior School and moved to the Grammar School for his secondary education.

“I loved growing up on such a wonderful island, I catch myself getting homesick routinely. I spent most summers playing futsal at the local park,” he said.

“After my first year at the University of Leicester in the UK, I spent the summer at the Cyprus Institute of Neurology and Genetics as an intern.”

Whilst there he gained hands on experience in the lab with the institute’s generating an experimental autoimmune encephalomyelitis mouse model (a very useful animal model, that allows us to learn a lot about similar human diseases such as multiple sclerosis). “Early research experiences like this helped motivate me to pursue a career in science and develop a breadth of knowledge,” he said.

He explained what kind of research he is involved in now, which convinced The Simons Foundation to invest in him, as the foundation sponsors a fellow who shares their vision of important research.

Of course, it is incredibly complex, but to just to give readers a basic idea, it is a study of the immune system. The fellowship will allow Santiago-Frangos to study fundamental aspects of the bacterial adaptive immune system called CRISPR – an acronym for DNA fragments of previously encountered viruses, that bacteria use to defend against future viral infections.

Other scientists have repurposed CRISPR for genetic engineering, Andrew said as a way of explaining it to somebody who understands nothing about the subject – me. CRISPR has spurred a revolution, enabling the easy and precise development of disease-resistant plants. There was even a report about two newborns in China being engineered to be resistant to HIV, with the use of CRISPR, he added.

We shall expect more at a later stage when Santiago-Frangos has the results of his own research.