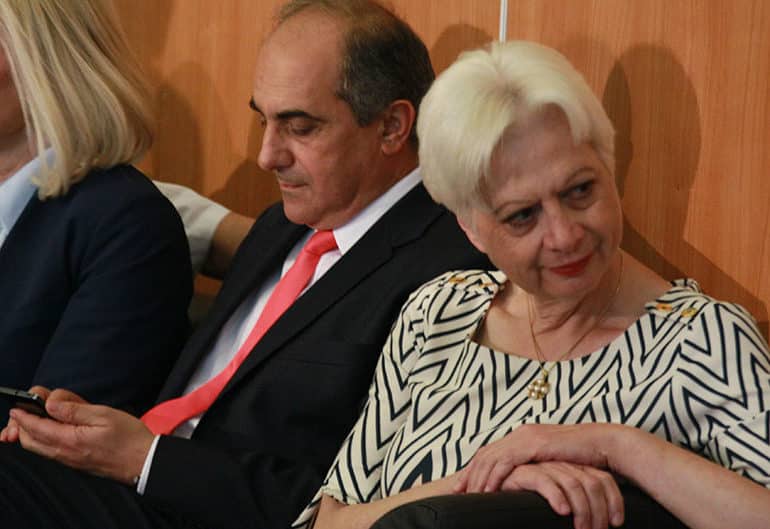 With former MEP Eleni Theocharous losing her seat in Sunday’s election, Cyprus has no women MEPs for the first time since 2009.

Gender Equality Commissioner, Iosifina Antoniou, said on Monday that the failure of any of the 19 female candidates to be elected as one of the six MEPs revealed a “serious democracy deficit”.

“This blow to democracy and equality can be stopped only by changing the attitudes, and mindset that nurture and reproduce patriarchal perceptions and unfortunately keep half of the population out of political and public offices,” the commissioner said.

Among the female candidates was former Diko MEP, Antigoni Papadopoulou who was running this time for Dipa, after she broke away from Diko along with former party leader Marios Garoyian. Papadopoulou, who was MEP between 2009 and 2014, received 2,051 votes.

Prominent business woman Leonie Paraskevaidou, a candidate with the Union of Fighters for Justice, a party founded in 2015, received just 253 votes.

Speaking after her defeat, Theocharous said her party, the Solidarity Movement, had honoured to the fullest the agreement it had forged with Diko for a joint race in the Euro-elections.

She said the Solidarity Movement had come out “reinforced and strengthened” from the elections.

“Solidarity will continue to play a leading, defining role in the political scene of our country,” she said.

But gender commissioner Antoniou was less upbeat, saying that the lack of female MEPs shows that Cyprus seems to be run by “intense patriarchal residues” and bound, to a great extent by “anti-democratic perceptions and anachronistic social stereotypes on gender roles in society”.

Other losers in Sunday’s elections were determined to remain positive about their defeats.

Only four of the 13 parties whose candidates participated in the election campaign managed to get in the European Parliament.

Far-right Elam’s 8.2 per cent was not enough to earn it a seat. The party had been expected to battle it out with Edek for the sixth seat, but the seat finally went to the socialist party which garnered 10.58 per cent of votes.

Garoyian’s Dipa got 3.8 per cent managing to beat the Citizens’ Alliance-Greens’ combination that received 3.29 per cent. Sener Levent’s Jasmine Movement got 1.7 per cent of the votes while the Animal Party got 0.79 per cent or 2,208 votes. Independent candidate, lawyer Michalis Paraskeva fared better than some small parties with 1,305 votes or 0.46 per cent.

The Patriotic Movement got 0.22 per cent, closely tailed by the Nationalist Freedom Movement that on 0.2per cent. The Union of Fighters for Justice got 0.16 per cent while the Cyprus Socialist Party received 170 votes or 0.06per cent.

The newly established Dipa was seen by some as the surprise of the elections. Its nearly 4 per cent of the votes defied polls which had predicted less than 2 per cent.

Garoyian said the percentage was “a small feat” which would allow it to participate in the National Council and grant it access to the media and having its voice heard.

The party, he said, started from scratch and their faith in their targets and principles gave them strength.

Dipa, he said, “wants to contribute to the struggle for our Cyprus and is here to stay”.

Villa return to Premier League with win over Derby