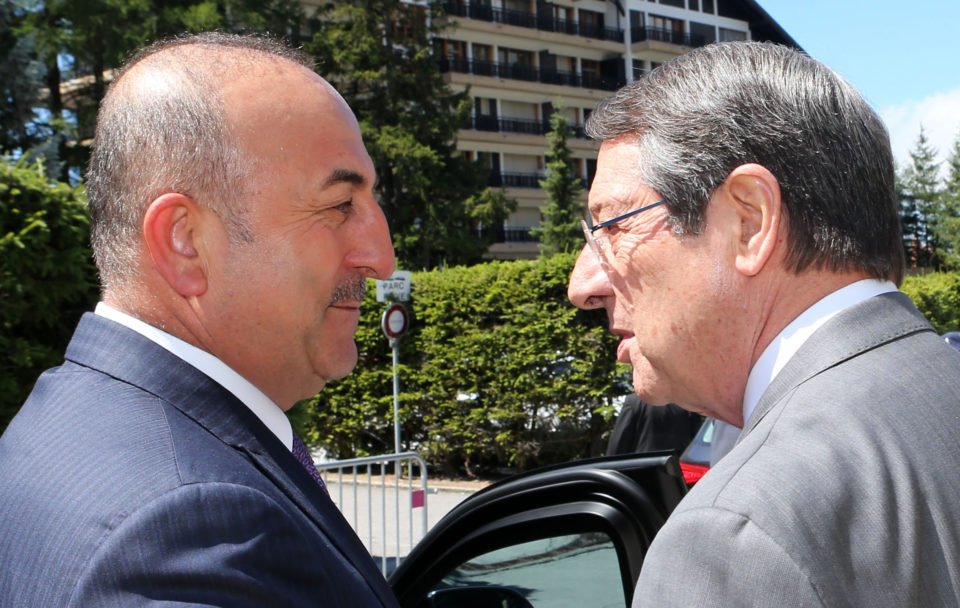 Cavusoglu and Anastasiades in Crans Montana

Ersin Tatar, the newly elected ‘prime minister’ in northern Cyprus, is a pragmatist. The last time I wrote an article about a pragmatic leader with whom you can do business was when Nicos Anastasiades was elected President of the Republic of Cyprus (RoC) in 2013. Alas he is still a work in progress.

It was Margaret Thatcher who famously said “I like Mikhail Gorbachev. We can do business together.” What she meant was someone interested in solutions despite fundamental disagreements.

Tatar does not stand on ceremony. He agreed to see me on Monday morning last week without a fuss and we met at his office in the ‘prime ministry.’ We talked freely about the issues that divide the island.

He respects Turkish Cypriot leader Mustafa Akinci, who appointed him to head the ‘government’ as leader of the largest party and he gave me the impression he defers to the ‘president’ as the political leader of the Turkish Cypriots in charge of negotiating with the Greek Cypriot community. He also respects Anastasiades, in the way his father respected the first president of RoC, Archbishop Makarios.

Rustum Tatar, is an alert 88-year-old who was the first Auditor General of RoC under Makarios, whom he remembers with great affection. He told me that from his perspective as an independent Turkish Cypriot officer of the republic with the task of ensuring that the RoC’s accounts were audited properly, Makarios backed him to the hilt in the face of nationalist opposition. He was a good leader was Makarios, Tatar Senior mused.

Ersin Tatar studied economics at Jesus College, Cambridge between 1979 and 1982, where he obtained an MA in Economics. He then became a Chartered Accountant (FCA) and worked for Price Waterhouse in London, and served as ‘finance minister’ in northern Cyprus. So he has pedigree, education, experience and political nouse.

I met Tatar on the day the EU condemned Turkish incursions in the RoC exclusive economic zone (EEZ). He had read my previous articles in the Sunday Mail critical of Turkey’s claim that she was acting lawfully; so far as he was concerned, however, the issue was more political than legal.

Although the RoC government has general international law on its side as the recognised government entitled to claim and manage the republic’s EEZ, in Turkey’s eyes, the absence of Turkish Cypriot participation means it lacks legitimacy in the management Cyprus’ EEZ under international treaty law.

The Turkish case is that Turkish Cypriot participation is guaranteed by the 1960 treaties between Cyprus, Turkey, Greece and Britain; and the treaties are as much part of international law as the EEZ is under the 1982 UN Convention on the Law of the Sea.

In other words, there is a conflict of international laws which according to Tatar makes the problem a political rather than a legal one. The Turkish side does not accept that it can be excluded from the decision-making processes concerning the management of Cyprus’ EEZ pending a solution to the political problem in Cyprus that precludes them from participating in the government of RoC.

Tatar does not, however, believe there is any prospect of military confrontation. Ever the Cambridge economist, he emphasised that peace, not hydrocarbon wealth, is the paramount consideration.

Peace is of course priceless but unfortunately countries are driven by customary international law to assert their claims in any dispute by conspicuous shows of force lest not to do so is interpreted as acquiescence. So there is method to Turkey’s sabre rattling although I must say there is something seriously wrong with the law if it encourages sabre rattling.

We next talked about the secular way of life in northern Cyprus compared to Turkey and southern Cyprus, where the Greek Orthodox Church is very influential. Turkish Cypriots are very secular both in their way of life and in their beliefs.

President Erdogan of Turkey is a pious Muslim who wears religion on his sleeve and has been responsible for correcting Ataturk’s extreme secularist legacy as he saw it. But, according to Tatar, he respects the secular way of life of the Turkish Cypriots and Tatar feels reassured by Erdogan’s stance: “my chemistry has changed because of the protection afforded by Turkey”, he told me as if to allay my reservations on the subject.

As for the future, at Crans Montana Anastasiades abandoned Akinci, his best friend from Limassol, for his new best frenemy, Turkish Foreign Minister Mevlut Cavusoglu. If there ever was a picture of eloquent body language it is the two of them in tactile mode.

There is a story, probably apocryphal, that they both felt a certain camaraderie as persecuted smokers at the conference centre. So they smoked and talked and schemed outdoors with no one else present. Was that when the so called plan B was hatched? Who knows? They do but are not telling.

So here’s my guess after my conversation with Tatar. Plan B is based on the idea of one country two states within the EU whereby the unifying effects of membership of the EU and the prospects of an ever closer union would be factored into a non-federal mix confining the country to a single member state within the EU but defining it as two states internally in accordance with EU and human rights law, with concessions on land, property and freedom of movement.

Obviously this is going to need a huge input of expertise on feasibility from the EU but it is the new thinking that seemingly has the approval of Anastasiades in preference to reunification under a power-sharing federal model. The two models are much of a muchness if you ask me but as always the devil is in the detail.

It seems that Cypriot politicians and civil servants do not wish to share power under a domestic federal umbrella but they are not averse if it is at one remove under an EU umbrella – kicking and screaming for effect no doubt but happy at not having the other community over their shoulder.

For the people across the divide, however, Akinci was the only one to emerge from the debacle at Crans Montana smelling of roses as a true Cypriot patriot.