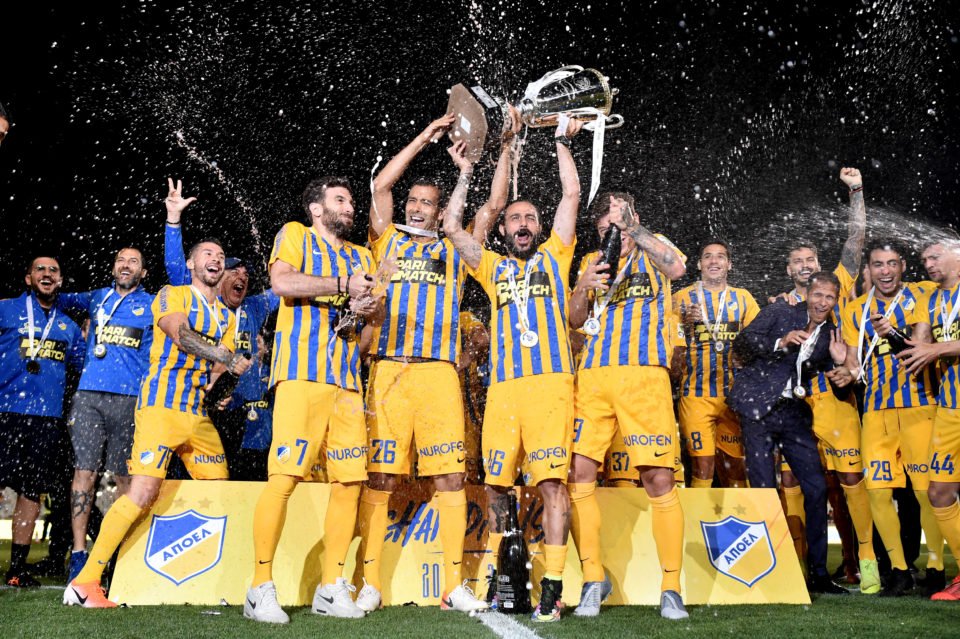 Apoel have won the title for the past seven seasons

The remaining two games scheduled for the opening day of the season (Apoel v Olympiakos and AEK v Apollon) have been postponed due to crucial European qualifying games involving Apoel and Apollon.

The Cyprus Football Association (CFA) have announced that games will be played over a four-day period (Friday to Monday) this season, obviously in an effort to avoid games overlapping. This has been done to perhaps satisfy the demands of pay TV channels who have forked out large sums to secure rights for the games.

The much despised fan card will be with us for another year despite pressure exerted by all clubs (bar AEK) for its ‘temporary’ suspension. They blame falling crowd numbers on this measure. However with 70,000 fan cards issued to date it is highly unlikely that the card is the only reason for this.

For yet another year the majority of teams were extremely busy in the transfer market with a whopping 120 players finding new homes with the transfer period not yet over.

Anorthosis, who had a miserable season last year, made the most signings along with newly-promoted Olympiakos with 16 while Apoel and Apollon made 15 each.

The most transfer-shy teams were last season’s runners up AEK, and Enosis who managed to avoid relegation on the very last day of the season with four.

The shock transfer of the season came from Pafos FC, who signed Englishman Jason Puncheon who up until last year played for Crystal Palace. It has also been rumoured that another former Palace player, the current Welsh international defender Joe Ledley has also agreed to join the Pafos club.

On the pitch, all teams will be trying to knock champions Apoel off their perch, with the Nicosia giants winning the title for the past seven straight seasons.

Despite making some impressive signings (Pavlovic, Savic, Alef to name a few) Apoel got off to a stuttering start in Europe, resulting in the dismissal of coach Paolo Tramezzani before the league even began.

His replacement, German Thomas Doll, steadied the ship and in only a few days managed to turn a group of players into a proper team.

Apollon will yet again pose the biggest threat to Apoel as they have also spent heavily on new players. A lot will depend on how quickly one of their new signings, rising Hungarian star Attila Szalai, who was brought in to fill the gap of the departing Frenchman Valentin Roberge, will adapt to the rigours of Cyprus football.

AEK have signed ‘only’ six players and with four players being released Imanol Idiakez’s side seems to lack depth. However, despite being knocked out by Gent in the Europa League in the third qualifying round they showed that they will be a force to be reckoned with this year as well.

Ketsbaia was feeling confident in one of his recent interviews saying, “we got all the players we asked for from the management, and our target is the title.”

Following a number of false dawns in recent years, the Omonia hierarchy have steered well clear of such aspirations.

It will be a big test for their new Norwegian coach Henning Berg whose managerial career has been somewhat of an enigma having failed to see out his contracts in any of his last five teams he coached despite leading one of them, Legia Warsaw, to the Polish league and losing the title with Hungarian side Videoton on the last matchday.

Former Manchester United defender Berg has brought in a lot of new faces (13) and it remains to be seen how quickly he can gel his team together.

The only other team that seems capable of breaking into the top six and challenge for a European finish is Pafos FC. There were periods last season where the team played the most entertaining and fluent football.

Had they not been docked six points for fielding an ineligible player they most probably would have had a top-six finish.

They have retained their standout players of last season like Rasic, Cools, Nemec and Berigaud and with the additions of Puncheon, Ledley, Besara and Reinholds their wily Croatian coach Zeljko Kopic will be spoilt for choice.

Both Ael and Nea Salamina are expected to drop into the second half of the table this season but they should be safe from any relegation worries.

The remaining four teams, Doxa Katokopias, Enosis Neon Paralimni, Olympiakos and Ethnikos Achnas will be the teams battling to avoid the drop.

Our View: Does the House president really need 16 advisors?