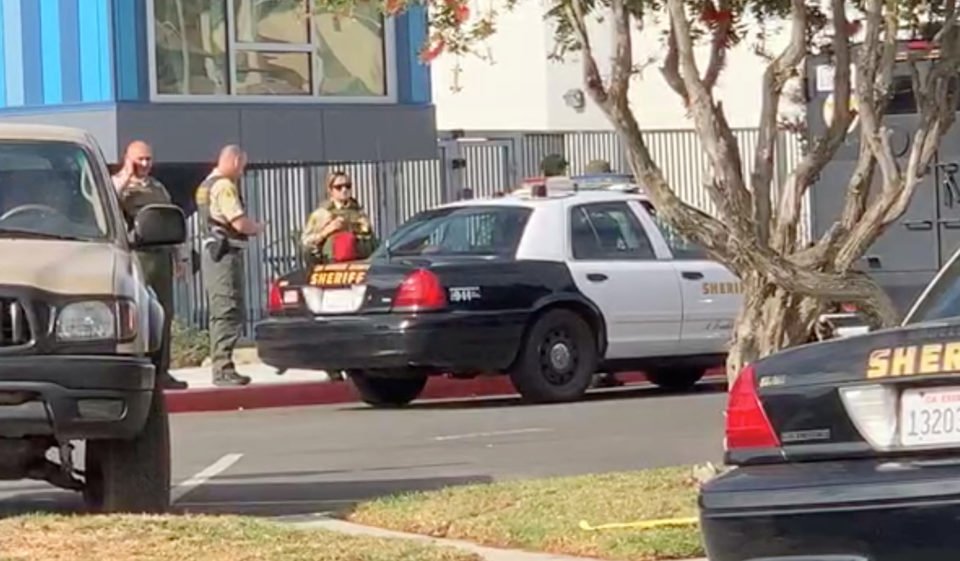 Sheriffs stand outside Saugus High School after a shooting, in Santa Clarita

A California high school student dressed in black opened fire on campus on Thursday, killing a 16-year-old girl and a 14-year-old boy and wounding three other teens before shooting himself in the head, officials said.

The suspect, who turned 16 on Thursday, was in grave condition, officials said.

After drawing a .45 caliber handgun from his backpack, he opened fire on the other students, and he saved the last bullet for himself, Captain Kent Wegener of the Los Angeles County Sheriff’s Department told a news conference.

“At this point, we have no indication of any motive or ideology,” FBI Agent Paul Delacourt said.

In addition to the two dead students, two other girls, aged 14 and 15, were wounded, as was a 14-year old boy, Wegener said.

The suspect was described by police as an Asian male and a student at Saugus High School in Santa Clarita, about 40 miles (65 km) north of Los Angeles.

The incident marked yet another school shooting in the United States, where repeated mass shootings in recent years have intensified the debate about gun control and the constitutional right for citizens to keep and bear arms.

This is at least the 85th incident of gunfire on school grounds this year, according to Everytown, an advocacy group pushing for stricter gun laws.

The scene at Saugus High School was reminiscent of other recent mass shootings at schools across the United States, including the massacre at Marjory Stoneman Douglas High School in Parkland, Florida, where a former student with an assault gun killed 17 people on February 14, 2018.

The Valentine’s Day massacre at Stoneman ignited a nationwide student-led movement, calling for school and gun safety. In August, survivors of that shooting released a sweeping gun-control plan that would ban assault-style rifles and take other steps with the aim of halving US firearms deaths and injuries within a decade.

This year marks the 20th anniversary of the shooting at Columbine High School in Colorado, where two teenagers went on a rampage, fatally shooting 12 students and a teacher and wounding more than 20 others before killing themselves.

“Speechless about the shooting in Southern California,” tweeted Cameron Kasky, a survivor of the Parkland shooting, who was one of the students who organized rallies and lobbying efforts in Florida’s capital Tallahassee and Washington following the shooting.

“Sending love and strength to the whole community,” Kasky added.

UNSG’s report on Good Offices Mission out on Friday