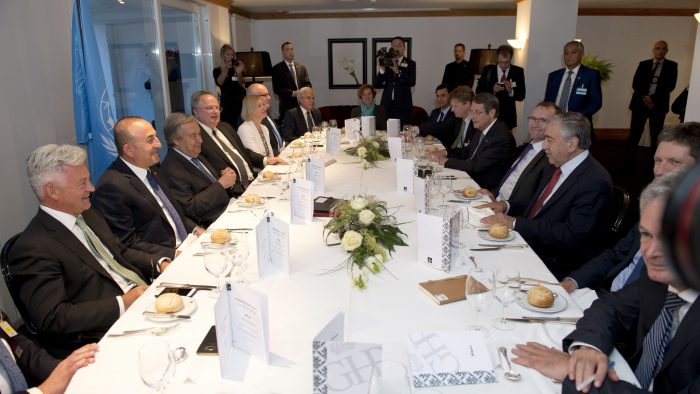 The final dinner before it all fell apart at Crans-Montana

Both our government and Turkey may say differently now, but Turkey was prepared to scrap guarantees at Crans-Montana. Here’s how it happened

The Turkish foreign ministry has said that reports published in the Greek Cypriot press last week that Turkey had accepted the abolition of guarantees in Crans-Montana was not true. The Cyprus government spokesman cited this statement to refute the reports. Yet, it is naïve for anyone to believe that Turkey’s foreign ministry would confirm they had intended to scrap the guarantees, especially at the present time of tension and no dialogue.

The issue of guarantees dominated the dinner given by UN Secretary-General Antonio Guterres on the night of July 6, 2017, attended by the three guarantor powers, the two communities of Cyprus and the EU as an observer. How that dinner unfolded is very enlightening concerning the parties’ intentions at that time.

Opening the debate on guarantees, Guterres said the Treaty of Guarantee and the right of unilateral intervention were not viable. He also informed those present that Turkey had handed him an informal document in which she proposed replacing the Treaty of Guarantee with a new Implementation Treaty for a settlement. Instead of a new treaty, Guterres adopted in principle the Greek side’s proposal for creating a mechanism to monitor the implementation of the settlement. The UN prepared a draft document for this mechanism.

Guterres asked Turkey’s Foreign Minister Mevlut Cavusoglu – in everyone’s presence – whether Turkey would accept the immediate abolition of the Treaty of Guarantee if there was a reliable monitoring mechanism in place. Cavusoglu replied that Turkey was open to dialogue and would be flexible, but it would depend on progress being made on the other four open issues. It is noteworthy that throughout the discussions the Turkish side did not object or express reservations about the proposal for a mechanism.

Guterres then raised the thorny issue of troop withdrawal. “Zero troops and zero guarantees,” he said, was not a starting point for the Turks, yet the protracted stay of troops was a red line for the Greeks. His strategy was to secure what he considered a viable compromise – not all troops would withdraw from the start, but their numbers would be rapidly reduced and there would be a clause for reviewing the length of stay. Guterres felt the issue of troops had to be addressed at a higher level by the prime ministers of the three guarantors, either attending a new conference in New York, or being summoned to Crans-Montana that day.

Guterres asked Cavusoglu if Turkey would agree to discuss the troops at prime ministerial level and he replied that there was no objection. To the same question, Greece’s Foreign Minister Nikos Kotzias responded that if the remaining troops were within the framework of the 1960 Alliance Treaty – 650 Turks and 950 Greeks – Greece would be open to discussing a process for reviewing their stay, at prime ministers’ level.

Cavusoglu said he fully understood Guterres’ position that the right to unilateral intervention was not viable and reiterated his position that “zero troops and zero guarantees” was not a starting point. However, he said, Turkey would be flexible and would consider reviewing its right to intervene if there was agreement on the remaining open issues. In such a case, he said, Turkey would be more flexible.

The ensuing debate was in line with Cavusoglu’s assurance to Guterres earlier that day that Turkey would accept the abolition of guarantees if there was agreement on the remaining issues and an agreed mechanism for implementing the solution. To ease the situation, Guterres informed Anastasiades at a private meeting before dinner that Cavusoglu was not authorised by Ankara to submit written proposals on abolishing guarantees, but would have accepted such a suggestion as part of a comprehensive package, if it came from the United Nations.

However, Anastasiades, who had gone to Crans-Montana grudgingly and under pressure, evaluated these developments negatively and not as an opportunity to abolish the guarantees. Already in February of that year, he had been speaking in Nicosia of a two-state solution. On the eve of the dinner he had approached Cavusoglou and told him that efforts for a federal settlement were futile because the Greek Cypriots were not even prepared to share their hospitals with the Turkish Cypriots. The only viable solution was two states.

Anastasiades used what Guterres told him – that Cavusoglu had no authority to submit written proposals on the guarantee issue – and built all his arguments on the demand that the Turkish side put its position in writing. Turkey’s pledge to be flexible meant nothing to him. He insisted that there were ambiguities, and that he would not accept any agreement without everything being made clear.

When Guterres said that he believed Turkey would accept ending its right to intervene as part of a comprehensive settlement and assuming that all the pending issues had been settled, Anastasiades asked why Turkey could not openly say that it accepted the abolition of guarantees. Cavusoglu responded by saying that the secretary-general had just said it, “but you didn’t want to hear it”.

Doubts as to whether Anastasiades was negotiating “in good faith” were strengthened by his questioning of the mechanism for implementing the solution. Although Anastasiades had proposed the mechanism himself, at the critical moment he maintained that the plan presented by Guterres was unclear and that it was just the Treaty of Guarantee under another name. His assertion sparked a reaction from Guterres, who told Anastasiades the mechanism was not unclear.

One of Anastasiades’ objections was that Turkey would have a role. The mechanism had five levels of intervention, the last one belonging to the UN Security Council. Turkey, like Greece, would take part in an eight-member committee at the second level, which had no executive authority and would be chaired by the UN.

On Anastasiades’ insistence that Turkey give its position on the issue of guarantees in writing, Guterres offered a way out by suggesting he wrote the text himself explaining what he had understood from his discussions with the Turkish side. Cavusoglu pointed out, however, there should be clarifications on all issues, not just guarantees. He added that he did not agree to anything being put in writing and then brought up his original proposals that the guarantees should be maintained and reviewed in 10 to 15 years’ time. In this highly charged atmosphere, an obviously frustrated Guterres took responsibility, saying there had been a misunderstanding on his part. This admission did not refer directly to his bilateral discussions with Cavusoglu, but to his belief that an agreement was possible. His assessment now, he said, was that there were no realistic prospects of an agreement and called an end to the conference. This position of Guterres was leaked to the media as an admission he had been deceived by Cavusoglu.

Guterres’ initial assessment that a solution was feasible was not made in a vacuum. The open issues would all have been dealt with by the Guterres framework, which was supposedly accepted by both sides. Guarantees would be abolished, replaced by the settlement implementation mechanism, while the issue of troops would be addressed at the level of prime ministers. Assurances of a quick departure had been given and the goal of 650 Turks and 950 Greeks staying was achievable.

Greece’s prime minister was willing to go to Crans-Montana. In fact, before the final collapse there was a break for Anastasiades to speak to Tsipras on the phone. It was clear that Tsipras wanted the conference moved to prime ministerial level, but Anastasiades did not.

Cavusoglu said he was prepared to stay at Crans-Montana for as long as it took.

Guterres said he would leave the next day but was willing to return to continue the prime ministerial conference.

Only Anastasiades was in a hurry to leave. He had instructed the Cypriot delegation to pack their bags before the final dinner.

Tales from the coffeeshop: Show trials and martyrs Edek style