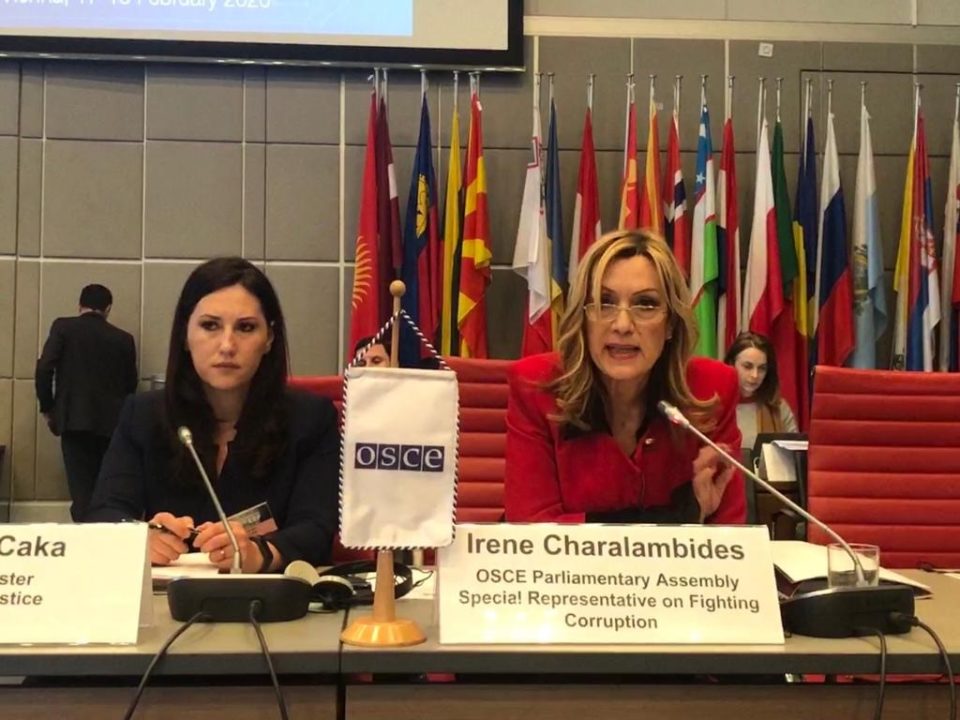 Corruption poses a serious threat to economic development, prosperity, the rule of law and the stability European states given its links to organised crime and the financing of terrorism, Special Representative on Fighting Corruption at the Organisation for Security and Cooperation in Europe (OSCE) Irene Charalambides said on Monday.

Charalambides was addressing the first preparatory meeting of the OSCE economic and environmental forum in Vienna on the challenges and opportunities in preventing and combating corruption through innovation, increased transparency and digitalisation.

The MP for left-wing Akel, who has been vocal in the Cyprus parliament on issues of corruption, focused in her address on the leading role that national parliaments should play to prevent and combat corruption and how legislators can work in synergy with governments and relevant international stakeholders to advance global anti-corruption efforts.

“Parliaments can have a critical impact through the legislation they adopt. Criminalising all possible forms of corruption and imposing firm penal sanctions on perpetrators must be a priority in all the OSCE participating States,” she said, adding that gGood legislation was also key in providing law enforcement and judicial authorities with the appropriate tools and resources to combat corruption, coupling it with sufficient deterrence.

Charalambides said the responsibility lies with National Parliaments to pass legislation enabling whistleblowers to report about corruptive behaviours they experience. The media environment also needed to remain pluralistic and protected from undue influence.

“It goes without saying, or at least it should, that parliaments should not exempt themselves from these processes. Robust law-making on issues such as incompatibilities and conflicts of interest of parliamentarians, transparency in political party funding and lobbying are paramount to prevent corruption within the political system,” she added.

“I cannot stress enough that parliaments should go beyond ensuring that such laws are simply in existence. They must also ensure that they incorporate relevant international standards… and build on existing promising practices.”

In May, Charalambides said there would be a major international parliamentary Conference in Cyprus on the topic.

In addition to adequate legislation and best practices by parliaments, Charalambides said there also needed to be oversight. “The public scrutiny of governmental action can be equally decisive in efforts to combat corruption, she said. “As representatives of our citizens, we strive to hold authorities accountable, to ensure governments fulfil their obligations, and to detect and prevent any abuse of power.”

Parliaments also needed to safeguard the independence and/or autonomy of key anti-corruption national stakeholders, such as the judiciary, prosecution service, ombudsmen, auditors-general and anti-corruption agencies from political or other interferences.

“At the end of the day, political will remains the key in bringing about change in fighting corruption. A change in mentality, is therefore urgently needed,” Charalambides said.