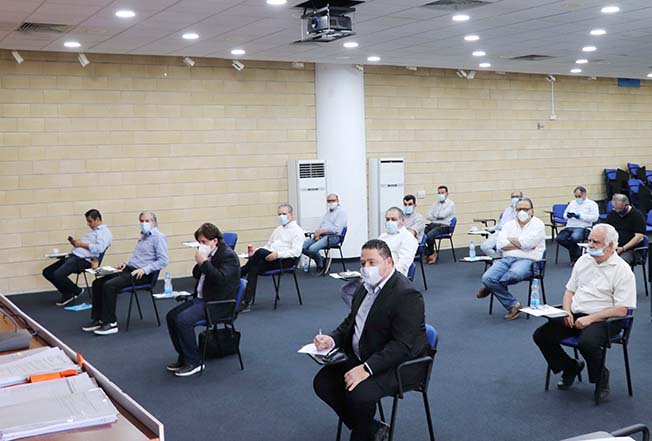 Confirmation came after the decision went to a vote, with 18 votes in favour of cancelling the season and two votes against

Despite last-ditch efforts by Anorthosis and the Pancyprian Footballers Association (Pasp), the current football season has been definitively cancelled.

The cancellation was confirmed during a Cyprus Football Association (CFA) meeting that took place on Friday, in which clubs took on board the government’s feedback, following consultations between all parties at the presidential palace on Thursday.

The CFA deemed the disparity between their own safety guidelines and those of the government’s own epidemiological team to be an insurmountable obstacle, inadvertently rendering cancellation the only possible outcome.

Confirmation came after the decision went to a vote, with 18 votes in favour of cancelling the season and two votes against. The two dissenting votes came from Anorthosis’ Michalis Pekris and AEK Larnaca’s Evangelos Mouscos.

In addition to the outcome of the current season, the CFA also confirmed the increase of next season’s Division One teams to 14, two more than the current 12. They also scrapped the playoff system, with the 14 teams facing each other two times before the table is finalised with no additional rounds to determine the champion or the relegated clubs.

The decision to cancel the season has not gone down well with all parties. Anorthosis and the players union Pasp feel particularly aggrieved by the outcome.

Pasp managing director Spyros Neophytides voiced his dissatisfaction during an interview with state broadcaster CyBC. “This is a dark day in the history of Cypriot football. It’s a shame for the people and it’s a shame for the country,” he said.

“Personally, I’m tired of bothering with all of this. Some clubs are baselessly not relegated while others are being promoted. The effects of the coronavirus are not an excuse. Any efforts made to salvage the season were carried out with a protocol which no one has seen.”

“They rushed to make this decision. This takes us 30 years back. Cyprus is first in the reduction of confirmed coronavirus cases. I’m interested in hearing what Uefa President Aleksander Ceferin has to say.”

“What took place at the presidential palace meeting was something extraordinary. Those who wanted to cancel the season have succeeded. They will be judged by the people. Now it’s time for ‘the third half’, which will unfold in court. Players have the right to all legal avenues”, Neophytides added.

Marios Lefkaritis, a member of Uefa’s executive Committee who is also on the Fifa Council, spoke to local radio station Sport FM. The Cypriot defended Uefa’s somewhat imprecise guidelines, saying that this is an unprecedented situation, making the issuance of any guidelines to 55 distinct administrations a difficult task.

“Every country has its own protocols and they have proved to be different in each instance. Some countries saw the danger early and dealt with it better than others. It’s not easy for Uefa to issue a unified set of guidelines for all countries. They can provide some direction but that’s as far as it goes”, Lefkaritis said.

Lefkaritis also voiced his concern over the increase of next season’s teams to 14, stressing that it is a serious matter, and that the format of the league can’t just keep changing every few years. “This shows that clubs aren’t interested in the broader good”, Lefkaritis said.

Uefa’s last guidelines were issued on April 23 and covered issues concerning league cancellations and European qualification. In those guidelines, Uefa did not predicate European qualification on the continuation of each country’s respective league. Rather it simply ‘strongly encouraged’ each association to do everything possible to complete the season.

Uefa did provide two reasons for the legitimate cancellation of the season.

Firstly, the “existence of an official order prohibiting sports events so that the domestic competitions cannot be completed before a date that would make it possible to complete the current season in good time before the next season to start.”

Secondly, “insurmountable economic problems which make finishing the season impossible because it would put at risk the long-term financial stability of the domestic competition and/or clubs.”

The question is whether the CFA will invoke the first reason, the second one, or both. Judging by the rumours emanating from the CFA’s camp, as well as the swiftness of the decision, it would be fair to assume that proving their case to Uefa would not be difficult.

Messi prefers not to over-think risk of coronavirus infection

Coronavirus: customers told limit their time at beauty salons to the minimum