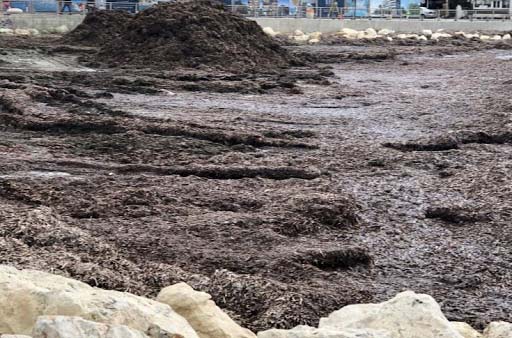 Seaweed piling up on a Paphos beach

It’s seaweed season again, and like every June this messy, smelly and pricey-to-clear-up plant is piling up on our beaches.

While there is an uproar about the seaweed on the beaches every June, and complaints by various municipalities about the cost of removing it, it doesn’t have to be this way, coastal engineer and director of Isotech Environmental Research and Consultancy Xenia Loizidou told the Sunday Mail.

On one level, the seaweed is not a problem but a blessing, she explained, as it is actually not a weed, but is shed by a plant scientifically known as Posidonia oceanica just as leaves are by trees.

“Posidonia can only grow in a clean sea. Wherever there is pollution, Posidonia is destroyed. This leads to the conclusion that the existence of Posidonia is an indicator of clean sea,” she said.

“The Posidonia meadows are a source of nutrition for the fish and other sea organisms as well as the sea turtles. These are their biotopes. If they are destroyed, these marine species will also be endangered since they will lose their source of nutrition.”

The meadows’ existence is not the problem, but breakwaters are. Built to prevent beach erosion, these breakwaters trap the seaweed, Loizidou explained. Where once the seaweed would be naturally washed away, it now accumulates and is becoming difficult to manage.

The seaweed also decomposes and produce hydrogen sulfite, giving off the unpleasant smell of rotten eggs.

“So one solution is to stop building breakwaters, but this is not the only one,” said the marine engineer.

Tens of thousands of euros are being spent by hoteliers every year to clean the beaches from the seaweed, the Cyprus News Agency reported earlier this year.

Instead of spending vast amounts of money to dispose of the Posidonia, Cyprus needs to invest in how to utilise this extremely useful plant, which is something that has never been done, she said.

“There was a proposal in the 1990s to begin research into this, but it never took off and the possibilities were never explored. It needs progressive politics, it is part of the green economy.”

This year, for the first time, it has it been decided to use the algae as a ground for horse training grounds, as horses need a soft ground to tread on, but much more can be done.

In other countries it is used to produce biofuel, medicine and cosmetics and is an ingredient in a plethora of industrial products.

Coronavirus: new relaxations to be announced within the day, minister says