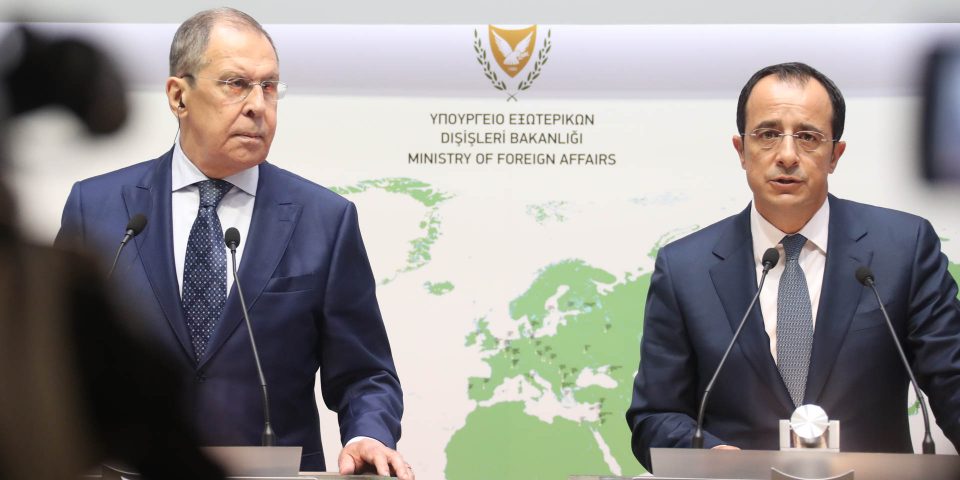 The government does not intend to change its policy towards Moscow, including providing facilities to Russian vessels for humanitarian reasons, Foreign Minister Nicos Christodoulides said on Wednesday,

The issue emerged after Sergey Lavrov accused the US on Tuesday of playing a destabilising role in the region, following his meeting with President Nicos Anastasiades.

The Russian diplomat’s comment came in the wake of the US announcement that it was to partially lift a 33-year arms embargo on Cyprus, which will last for one year – with the possibility of renewal. The easing of the ban applies to non-lethal systems.

“We are deeply concerned about the fact that a power located far away, the United States, is trying to play the countries in the region against each other and to pursue the course of ‘who is not with us is against us,’ forcing everybody else to follow this course,” Lavrov said.

“This is deplorable because the eastern Mediterranean and any other region need completely different approaches in order to solve their problems and promote their own interests. Searching for a compromise and a balance of interests is the only path towards resolving problems in different parts of the world.”

Speaking on state radio on Wednesday morning, Christodoulides stressed repeatedly that the issue had not been raised by Lavrov neither during his meeting with Anastasiades, nor during talks at the foreign ministry later in the day.

“Cyprus’ relations with the US were not raised by Mr. Lavrov.”

Beyond the reference made before the cameras that “concerns the US exclusively,” Lavrov had not said anything on the issue during the meetings, he added.

“Cyprus’ relations (with the US), the partial lifting of the embargo, the military cooperation announced recently, were not raised,” Christodoulides said.

Following the announcement regarding the embargo, US Ambassador to Cyprus Judith Garber said Russia was playing a destabilising role in the region, particularly in Syria.

Garber noted that legislation enabling the policy decision calls on the Republic of Cyprus to continue its efforts to implement strong anti-money laundering regulations and financial regulatory oversight, and to take the steps necessary to deny Russian military vessels access to ports for refuelling and servicing.  She said her country urges the Republic of Cyprus to take those steps.

Christodoulides said Cyprus afforded facilities to any country that requested it for humanitarian reasons, and it would continue to do so in the future.

He said there was no agreement with Moscow on the matter though there is an ongoing dialogue.

The minister argued that Russia had no use of Cypriot ports for its operations or anything else it did in the region since it had a port in Syria.

“This is what we did, and this is what we will continue to do,” Christodoulides said, adding that the island could not deny facilities of a humanitarian nature to anyone.