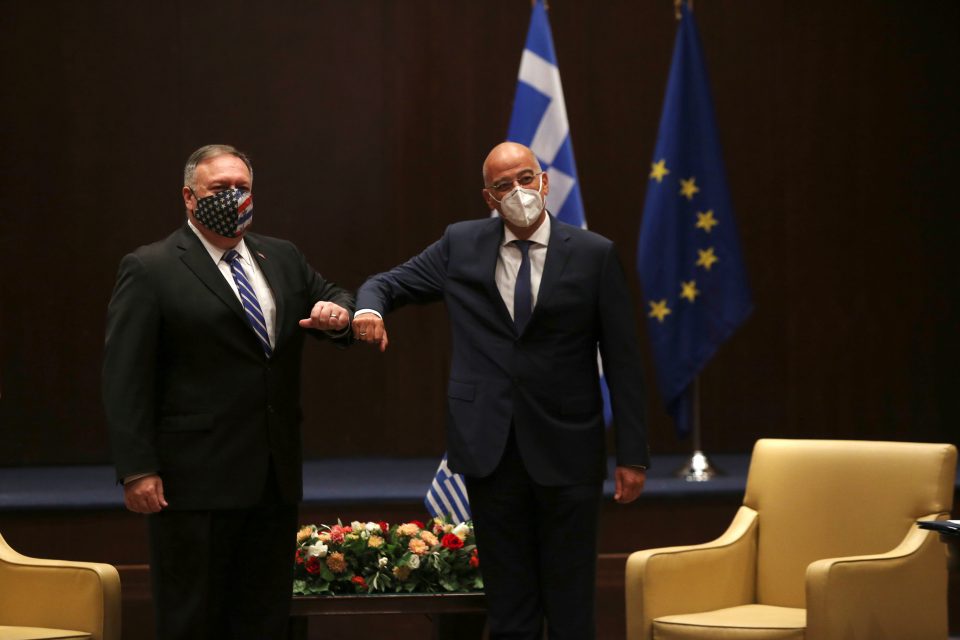 The United States and Greece called on Monday for a peaceful resolution of maritime disputes in the east Mediterranean as U.S. Secretary of State Mike Pompeo began a two-day trip to Greece amid increased regional tension over energy resources.

NATO allies Greece and Turkey, at loggerheads on a range of issues, have agreed to resume exploratory talks over contested maritime claims following weeks of tensions.

The United States also welcomed Greece’s readiness to seek maritime agreements with its neighbours in the region, they said after meeting in the northern Greek city of Thessaloniki.

Tensions escalated last month after Turkey dispatched the Oruc Reis seismic survey vessel, escorted by gunboats, into a disputed area thought to be rich in energy resources, following a maritime agreement signed between Greece and Egypt.

Turkey has said the pact infringes on its own continental shelf. The agreement also overlaps with maritime zones Turkey agreed with Libya last year, decried as illegal by Greece.

Ankara recalled the Oruc Reis this month, saying it wished to give diplomacy a chance.

Pompeo said on Monday he hoped the exploratory talks, which are expected to resume soon, will also bring results.

“We hope the exploratory talks not only get kicked off right, but it’s important that they’re resolved in a way that delivers outcomes that each of the two nations find more than acceptable,” Pompeo told the Athens News Agency.

Pompeo has previously said the United States is “deeply concerned” about Turkish actions in the east Mediterranean.

The United States also hopes to build up its energy ties with Greece, which seeks to become an energy hub in the Balkans and help Europe to diversify its energy resources.

Athens already imports large quantities of U.S. liquefied natural gas (LNG). It is developing a floating LNG storage and regasification unit off the port of Alexandroupolis, which is expected to channel gas to Bulgaria via the Interconnector Greece – Bulgaria (IGB) pipeline and from there to central Europe by early 2023.

ExxonMobil, France’s Total and Greece’s Hellenic Petroleum have set up a joint venture that will look for gas and oil off the Greek island of Crete.

The United States has also expressed interest in the privatisation of the ports of Alexandroupolis and Kavala in northern Greece.

Pompeo arrived in Crete on Monday evening. He was due to stay at the Greek Prime Minister Kyriakos Mitsotakis’ residence and visit the Souda military base on Crete on Tuesday.