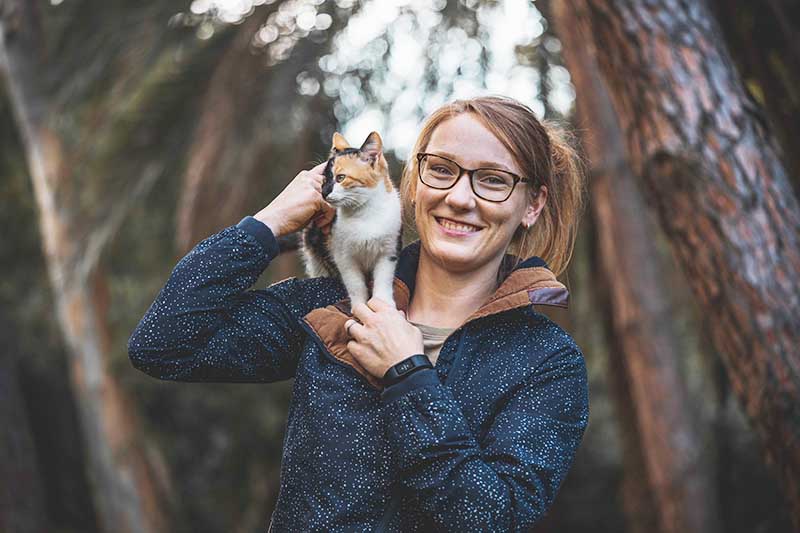 If you go down to Prodromou Park, Nicosia you are sure of a big surprise: a cats’ banquet. Dining on biscuits and soft canned meats, over 50 feline friends can be found enjoying their feed on silver-coloured platters. As each moggy finishes its meal, it retreats to a bench or a patch of grass to clean and groom itself and then perhaps goes for a nap in a box located under a tarpaulin in the undergrowth. Stacked one on top of each other like a precarious block of flats, these make-do cat kennels with outdoor restaurant facilities form what can best be described as a ‘catropolis’.

It was obvious to me when I discovered this cat hotel that a very benevolent person was taking good care of the occupants. A tall, fair, bespectacled young lady soon appeared and the moment she spoke the cats ran to her, and so did I, eager to find out more.

“Nadja,” she responded, as she continued to busy herself with the cats.

“Where are you from?” my second question quickly followed (I was already in interview mode).

But what, I wondered, was a young German woman doing in a Cypriot park taking care of stray cats?

Nadja Dallagnol found herself in Cyprus when her husband, a diplomat, was posted here and living in a flat near the Pedieos River, which is when Nadja first noticed the cats.

“I always loved animals and I missed having a cat in my life,” she explained. “My one childhood cat lived quite a long time – she was 19 when she passed. I always wanted to have another cat but it never worked out. When we knew we were coming to Cyprus, we did some research on the island and we found out that there is a huge stray cat population and I jokingly said to Paulo, ok, I’m coming to Cyprus with you but only if you promise me I can adopt each and every one of them!”

Nadja took to walking the dog along the river, carrying food with her in case she saw any cats. When she found an ailing kitten, she did not hesitate to pick it up. “It was in a very bad shape. I didn’t think about it, I just took it home,” she recalls. Under her loving care, it became her first adoptee.

But as autumn approached, Nadja became very concerned about the cats in the park.

“It started to get cooler and was raining and I noticed that the cats were without shelter. Back then, there was an old kafeneio in the park so I brought some boxes, towels and blankets and tried to find some covered areas around the abandoned building so that the cats could have some shelter,” she said.

Within a year the dilapidated building was torn down. Together with a Filipino lady called Emma, who had also been caring for the cats, they assembled anything they could to make a new shelter for the cats which became the first of two cat stations they would erect in the park.

Nadja then set about doing more than just providing food and shelter; she started catching them and taking them to local vets for spaying and neutering.

Proudly showing off her efforts to her friends and family back home in Germany, it was not long before her mother found someone who wanted to adopt a ginger fur ball. So last Christmas, Nadja found herself on a plane back home with the animal in the next seat. This sowed the idea in her head that perhaps she could encourage other Germans to adopt cats from Cyprus and so she set up a website to do just that. In the last year, a further two cats from the park have flown to forever homes in Germany, and another five have been adopted in Cyprus.

She also operates a ‘trap, neuter and release’ programme to make sure that they can not continue to breed and add to the huge cat population of Cyprus which is estimated to be in excess of one and a half million.

“What we need is a more permanent structure,” acknowledges Nadja, hopeful that someone may come to the rescue, as registered cat charities, from which she has sought help and advice, are themselves “overwhelmed” and have advised her to just do what she can. And that’s exactly what she is doing.

“I also have high hopes that this social media will raise more awareness and we will get volunteers,” she adds, eager for donations of food, blankets and boxes.

She even has names for all of them, and a story to tell about some of them. But does she have a favourite?

While Nadja fills up water bowls from plastic bottles in her rucksack and bemoans the fact that “dehydration is a big problem in cats, especially in the summer”, I ask about long term plans for the future, which could include setting up a cat sanctuary when they retire. When I ask if it will be in Germany or Brazil, her response is a surprise.

“It will be wherever it is needed,” she states, indicating that it is more likely to be a Mediterranean country.

“Yes,” she confirms. “You really have the feeling that you can do something good here.”