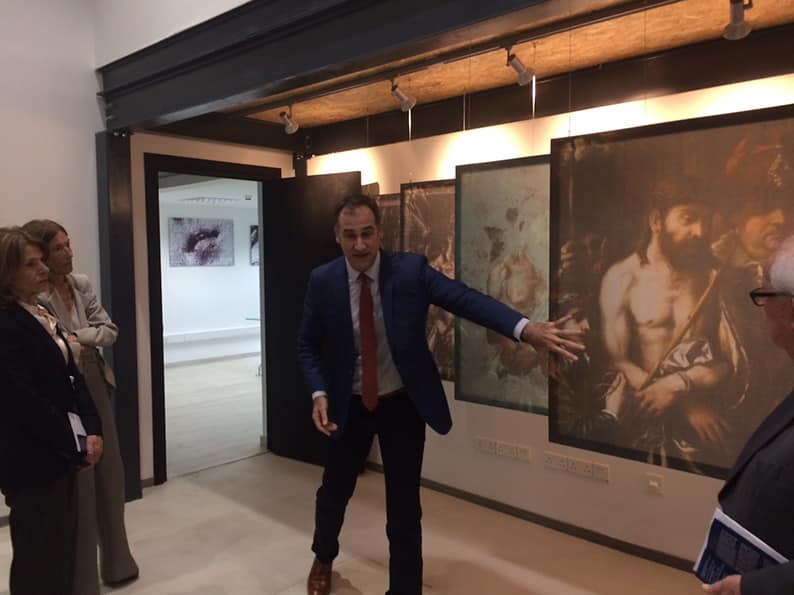 President Nicos Anastasiades couldn’t have put it better when last week he lamented the Cyprus Institute’s lack of visibility among the public.

“It is a pity that with so many researchers, with so many worthy scientists that a real centre of excellence does not receive recognition in Cypriot society,” he said at an event to inaugurate new laboratories at the Cyprus Institute.

Over the last decade the Cyprus Institute has built up three research centres, one focused on the environment and energy, another a science and tech centre and the third an archaeology research centre.

But despite its scale and scope, the institute’s public profile remains low.

Just one small section of the institute’s facilities, the new laboratories which the president opened last week, will bring together equipment and personnel for art characterisation: the scientific method to learn all about a work of art.

And here is where the problem with visibility starts. How many people know what that is and why this may be important?

At the inauguration, professor Theo Rehren tried to keep his explanation of the method and purpose of the process simple by likening it to medicine.

While doctors look deeper than beauty which is often described as skin-deep, checking organs and wrinkles, the institute does the same to find out what is behind the surface of a painting, “its colours, materials, to define a work of art in its uniqueness”.

The practical aspect of characterising a painting is so that its exact age can be determined, when and how many times it has been restored, all things that are useful to know for insurance purposes and to calculate how much it is worth.

The process is not that easy to describe, and people tend to give up, confusing a scientific process which is hard to understand with an outcome that is very real and interesting.

It can take some explaining by the researchers who are sometimes unaware that not everybody is familiar with their language.

“The labs offer an interdisciplinary research pipeline that is based on a broad and multi-scale diagnostics approach, integrating inorganic/organic physico-chemical methods with reflectography, multi-spectral imaging, and surface 2D imaging/3D geometric characterisation,” one of them wrote to me after my tour of the premises.

The description, I think, was meant to clarify the procedures!

By then I did understand a little, having had the tour and an interview with chemist Svetlana Gasanova, who has been with the institute for four years and has been involved in various projects during that time, analysing big and small sculptures, icons and canvas paintings.

“We prioritise non-invasiveness,” she stressed at the beginning of our meeting. Which means that the analyses carried out are executed without actually peeling away at a painting, or taking a bit of clay from a sculpture, even for a tiny sample.

What can you find out about a work of art without doing this? “Almost anything,” came her confident reply.

For the uninitiated, paints are made of an inorganic component – pigments such as soot, charcoal, okra and iron – and a binder, which in the old days was oil or egg yolk.

This, then, is one way of finding out about the history of a painting. Very old ones contain a very limited amount of pigments, while now we have thousands. Some pigments were also displaced by others over time, Gasanova explained.

How you find out what those are without taking a sample? It is about some of the methods mentioned above.

Different types of imaging can be used, and the Cyprus Institute seems to have all the modern equipment, including some, I was told, that is brand new and has not even been used yet.

Infrared, UV and X-ray imaging can all penetrate a painting at various levels, often finding sketches beneath a painting and peeling away layers without touching or dissolving them.

In the past, scientist Nicolas Bakirtzis explained, painters routinely painted over something they had painted before, and that is why there are often several layers.

“When they couldn’t sell something, or thought of something better, they painted over it because the material for the canvas was expensive,” he explained. “This way there was no waste.”

Spectroscopy is another method. An X-ray beam excites the atoms and the XRF machine reveals a fluorescent spectrum of colours, which indicate the chemical elements present, such as Calcium, Titanium or Zinc.

It is important to note that when we say colours, the spectrum is not just what we see with our naked eyes. Two ‘blues’ may look exactly the same but may be totally different in terms of how expensive they are – and thus how much a painter is able to use –  and how old they are. Certain pigments are only available in some regions, so the origin of the painting may also be revealed. By matching materials painters use for one picture to that of their other works authenticity can be determined.

Studying individual paintings is just one of the institute’s many activities. There are also several projects aimed at being used in contemporary everyday life, Bakirtzis said. Taking careful measurements, a team has constructed an interactive map of Nicosia, which shows the angle of the sun at every time during the day, something that can help future town planning, as it highlights the impact of high rise buildings.

The map of Nicosia developed by the institute also has a lot of data which have the potential to be used for tourism purposes, to show visitors what and where the points of interests are. The detailed map also displays the transportation network, useful for future planning by the municipality.

These results are obtained via a process, or a pipeline as the scientists call it, having to do with those not-so-easy to understand methods, photogrammetry, multispectral imaging, 3D geometric characterisation, and no department works in isolation.

What became clear to me during my visit is that yes, there is a lot of important work being done at this centre, and it is well worth finding out what it is.

The Cyprus Institute (CyI) has been developed as an international science and technology organisation, to strengthen the research community of Cyprus, help transform its economy to a knowledge-based economy and to create a research hub for the Eastern Mediterranean region.

Following its launch with an initial small team comprising of about 10 members of faculty and staff overall, CyI has been continuously growing in the last few years and will soon engage more than 150 scientists and professionals, from around the world.

It is one of the most successful Cypriot organisations in securing European funds.

On May 18 and 19, the Cyprus Institute will host the international conference ‘Climate Change in the Mediterranean and the Middle East: Challenges and Solutions’ in Nicosia. The conference which will bring together leading scientists and decision makers.