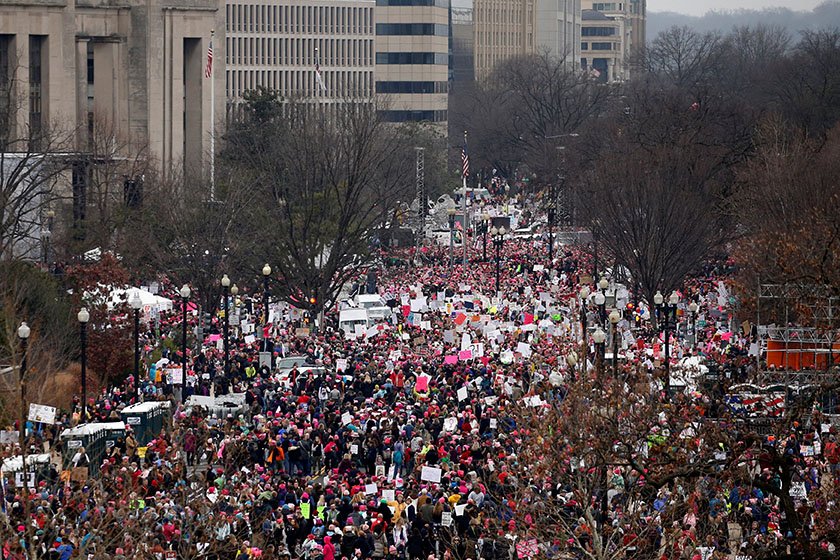 Large crowds of women, many wearing bright pink knit hats, poured into downtown Washington by bus, train and car on Saturday for a march in opposition to US President Donald Trump only a day after the Republican took office.

The Washington event was expected to be the largest of a series of marches across the world in cities including Sydney, London, Tokyo and New York to criticise the new president’s often angry, populist rhetoric.

The flood of people stressed the city’s Metro subway system, with riders reporting enormous crowds and some end-of-line stations temporarily turning away riders when parking lots filled and platforms became too crowded.

Trump has angered many liberal Americans with comments seen as demeaning to women, Mexicans and Muslims, and worried some abroad with his inaugural vow on Friday to put ‘America First’ in his decision making.

On Friday, the nation’s capital was rocked by violent protests against the businessman-turned-politician, with black-clad anti-establishment activists smashing windows, setting vehicles on fire and fighting with riot police who responded with stun grenades.

One of the groups that organised Friday’s protests sent a call to members to return to the streets after the women’s march ended.

The protests illustrated the depth of the anger in a deeply divided country that is still recovering from the scarring 2016 campaign season. Trump defeated Democrat Hillary Clinton, the first woman nominated for president by a major US party.

“It’s important that our rights be respected. People have fought hard for our rights and President Trump has made it clear that he does not respect of them,” said Lexi Milani, a 41-year-old restaurant owner from Baltimore, who had ridden down in a bus with 28 friends.

Washington subway trains and platforms were packed with people. The Metro sent a service alert warning of “system-wide delays due to extremely large crowds.” At least one station was temporarily closed to new passengers because of the crowds backed up on the platform.

Elizabeth Newton, 59, travelled from Lafayette, California, to attend the march and stayed overnight in Baltimore. When she and her friends arrived at a rail station in that city to try to board a train to Washington, they were overwhelmed by the crowds.

“It was all the way around the block and partway around again. It was extraordinary,” Newton said. She and her friends instead opted to spend $106 on a Uber ride in to the city.

“There is no question it is a very busy day. We are seeing heavy crowding on the system, particularly at the end of line stations where people have driven into the Washington D.C., area,” said Dan Stessel, a spokesman for the city’s Metro system.

The system was changing traffic flow at some stations, including rerouting some escalators downtown to carry all passengers out to accommodate the crowds, he said.

The crowd filled six city blocks of Independence Avenue, with more people spilling into side streets and additional marchers pouring into the area as of 11:30 a.m. (1630 GMT).

The Women’s March on Washington, featuring speakers, celebrity appearances and a protest walk along the National Mall, is the brainchild of Hawaiian grandmother Teresa Shook and is intended as an outlet for women and their male supporters to vent their frustration and anxiety over Trump’s victory.

Many participants wore knitted pink cat-eared “pussyhats,” a reference to Trump’s claim in the 2005 video that was made public weeks before the election that he grabbed women by the genitals.

The march spotlights the fierce opposition Trump faces as he takes office, a period that is typically more of a honeymoon for a new president.

A recent ABC News/Washington Post poll found Trump had the lowest favorability rating of any incoming president since the 1970s.

Women gave a host of reasons for marching, ranging from inspiring other women to run for office to protesting Trump’s plans to repeal the 2010 Affordable Care Act, which among other things requires health insurers to cover birth control.

Jesse Carlock, 68, a psychologist from Dayton, Ohio was attending her first protest in decades.

“Once Mr. Trump was elected, I decided I needed to get active again, and I hadn’t been since the 60s and 70s,” Carlock said. “I’ve got to stand up and be counted as against a lot of what President Trump is saying…about healthcare, immigration, reproductive rights, you name it.”

Women said they hoped to send a unity message to Trump after a campaign in which he said Mexican immigrants were “rapists,” discussed banning Muslims from entering the United States, and was revealed to have once bragged about grabbing women by the genitals and kissing them without permission.

Trump’s team did not respond to a request for comment about the march.

Celebrities such as the musicians Janelle Monae and Katy Perry – both of whom supported Clinton in the election – are expected to take part in Saturday’s march.

The march organisers said they had extensive security plans in place, and would have both visible and hard-to-spot security workers along the route.

Putting bullies in their place