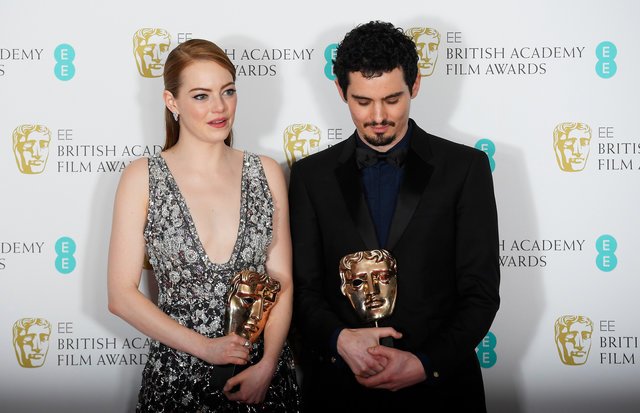 It won five gongs in total to keep its hot streak in the movie awards season going before the Oscars later this month, as it also picked up awards for cinematography and original music.

Amid the awards there were also veiled references to new U.S. president Donald Trump, who has caused controversy with his plans to build a wall on the Mexican border and his restrictions on migration.

“In a time that’s so divisive I think it’s really special that we were able to come together… to celebrate the positive gift of creativity and how it can transcend borders and how it can help people to feel a little less alone,” Emma Stone said in her acceptance speech.

“La La Land”, a throwback musical about an aspiring actress and a jazz pianist who are trying to make their way in Hollywood, had been nominated for 11 British Academy of Film and Television Arts (BAFTA) awards. Its success follows on from the Golden Globes, where it picked up seven awards.

It has a joint-record 14 nominations for the Academy Awards on February 26, Hollywood’s highlight of the awards season.

Justin Hurwitz, who won the award for the film’s music, said that he hoped the success of the film might prompt a renaissance in the genre.

“I love to go the theatre and see musicals. So if this can help any more musicals get green-lit, that would be amazing,” he told Reuters ahead of the ceremony.

While Stone triumphed, co-star Ryan Gosling lost out in the best actor category to Casey Affleck, for his performance in family drama “Manchester by the Sea”. Gosling was also notable by his absence, with the film’s producers saying he had a family matter to attend to.

“Manchester by the Sea” picked up two awards in total, with Kenneth Lonergan’s picking up an award for original screenplay.

A popular pick among the audience in the Royal Albert Hall, Londoner Dev Patel, 26, won best supporting actor for his performance in “Lion”, which charts the real-life story of an Indian boy adopted by an Australian couple. The film also won an award for best adapted screenplay.

Viola Davis took home the prize for best supporting actress for her performance in “Fences”, an adaption of a Pulitzer Prize winning play about the life of a black family in 1950s Pennsylvania.

She alluded to issues with race relations in the United States in her acceptance speech, and defended Meryl Streep, who was criticised by Trump after the Golden Globes.

“Anyone who labels Meryl Streep ‘an overrated actress’ obviously doesn’t know anything about acting,” she told reporters. “That’s not even just directed towards Donald Trump, that’s directed towards anyone.”

Outspoken director Ken Loach turned his ire onto British politicians, lambasting the “callous brutality” of the government as he accepted the award for “I, Daniel Blake”, an unflinching depiction of a man’s struggles while on benefits.

However, some of the political interventions were more light-hearted. American director Mel Brooks, who wrote and directed “The Producers”, a 1968 comedy about the producers of a musical about Nazi Germany, also made light of the current political situation.

“I’m not afraid of Trump, not at all,” Brooks told reporters, after he won an award for contribution to film, known as the Fellowship. “I think he’s mostly an entertainer.”