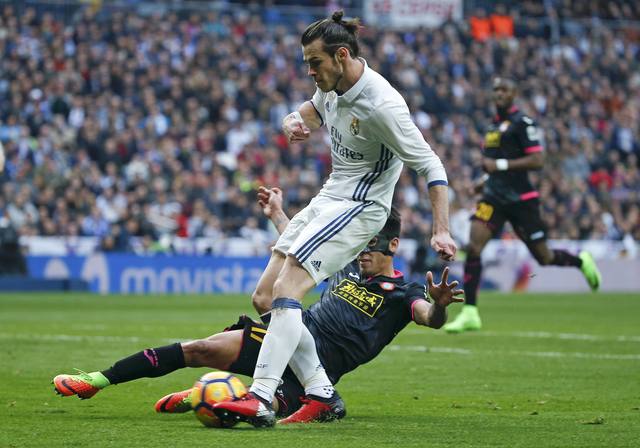 Gareth Bale marked his return to action after a long injury layoff by sealing a 2-0 victory for Real Madrid over Espanyol on Saturday to provisionally stretch Zinedine Zidane’s side’s lead at the top of La Liga to three points.

Alvaro Morata headed home a floated cross from Isco to put Real ahead after 33 minutes against a stubborn Espanyol side and Bale steered another pass from the Spain midfielder in off the post in the 83rd minute shortly after coming off the bench.

Bale, making his first appearance since damaging ankle ligaments against Sporting Lisbon in November, netted his eighth goal of the season. Real also set a club record of scoring in 42 consecutive games in all competitions.

“I’m delighted that Gareth is back and especially for him, he was so keen to return and feel like a player again after almost three months away from the pitch,” Zidane told reporters.

Real top the standings on 52 points, three clear of Sevilla, who beat Eibar 2-0 at home thanks to goals from Pablo Sarabia and Vitolo in either half, and four ahead of Barcelona, who host Leganes on Sunday. Real have two games in hand on Sevilla and one on Barcelona.

Sevilla kept the pressure on Real with the help of an inspired performance from Stevan Jovetic, a loan signing from Inter Milan in January, who laid on the passes for both their goals.

The Montenegrin forward conjured up a classy piece of skill in the Eibar area before serving a cross for Sarabia to volley home from close range in the 30th minute and then pulled the ball back for Vitolo to make sure of the win in injury time.

The win gives Sevilla a timely confidence boost before their Champions League last-16 game with Leicester on Wednesday and their local derby at Real Betis next Saturday.

“We knew what we had to do but we didn’t have the best of days. We committed a lot of errors and gave the ball away a lot but these are the types of games you have to win because they determine whether you are title candidates or not,” Sarabia told BeIN sports.

Earlier on Saturday, Kevin Gameiro came off the bench to score a hat-trick in the space of five minutes to fire Atletico Madrid to a 4-1 win over struggling Sporting Gijon that kept them fourth in the standings on 45 points.

Yannick Carrasco had given Atletico the lead 12 seconds into the second half but Sergio Alvarez gave the impressive home side a deserved equaliser in the 49th minute.

For the second week in a row, however, Atletico dug deep to rescue the points from an unconvincing display.

Antoine Griezmann had a goal harshly ruled out for offside but laid on the pass for Gameiro’s first strike, the former Sevilla player calmly rounding Ivan Cuellar to put Atletico ahead in the 80th minute.

Gameiro ruthlessly killed off Sporting with two quick-fire strikes, latching on to a pass from Thomas Partey to score in the 81st minute and taking advantage of another through ball from Griezmann to complete his treble.

The Frenchman is the first Atletico player to score a hat-trick in the league as a substitute while his treble was the second-fastest in the history of La Liga, behind only Bebeto’s for Deportivo La Coruna against Albacete in 1995.

“We didn’t imagine anything else than the difficult game we had. Atletico have always struggled to win here,” said Atletico coach Diego Simeone.

“The substitutes gave us an extra boost and made us stronger in midfield and then Gameiro’s speed settled the game.”

France warns the United States against the weakening of Europe