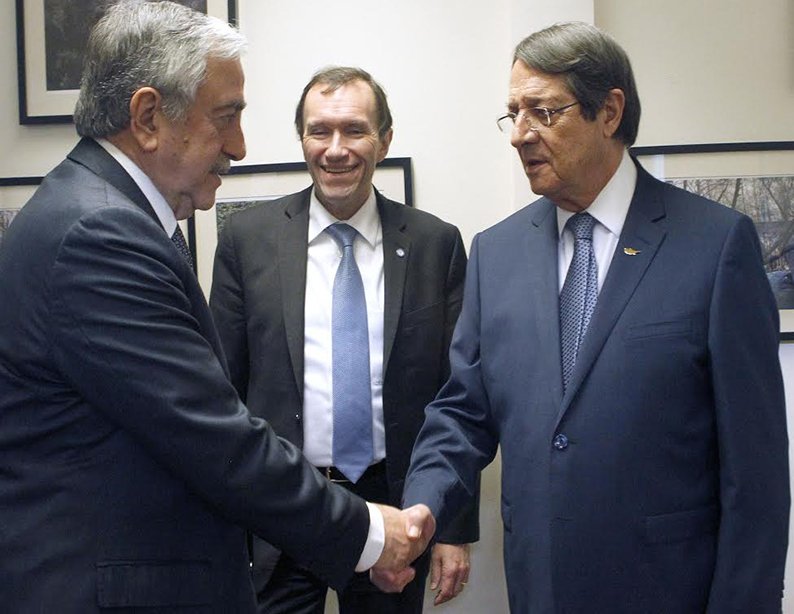 Mustafa claimed that Nik stormed out of the room banging the door and while Nik had done so, he came back

THE CYPROB is not just an issue of invasion and occupation as our enlightened rejectionists always like to remind us. The farcical row of the last ten days, regarding the marking of the Enosis referendum at schools, showed that the much-loved Cyprob is also an issue of the moral high ground the war over which has been raging for decades between the two communities.

I refer to the efforts of each side to appear as the good guys to the outside world – morally superior, highly principled and wronged victims of the other side’s evilness, dishonesty and brutal arrogance. It is the war that can be won just with words and bit of theatre, without any need for armies and bloodshed, which is why the two sides love it.

We Greek Cypriots adore it because we had been winning it for many years without taking risks or needing to make any sacrifices. It was a war cut to our measures and one of the reasons so many of our ultra-brave warriors for the moral high ground like Junior, Sizo, Lillikas etc support partition. It would allow them to carry on posing as the wronged, good guys of the Cyprob, fighting for justice.

After the invasion and for the 30 years the Denktator was in power, Turkey may have been occupying the north, but our occupation of the moral high ground was unchallenged.  After the sidelining of the Denktator by Turkey and the Turkish Cypriots’ yes-vote in the 2004 referendum our occupation suffered its first major defeat.

Suddenly, the Turkish Cypriots became the good guys, the wronged and persecuted community that enjoyed the support and sympathy of the outside world and they loved it. With the unlikeable, hard-line Tassos (the Greek Cypriot equivalent of the Denktator) in power, we were displaced from the moral high ground after a 30-year occupation.

THE HYSTERICAL reaction of the Turkish Cypriots to our parliament’s vote about the 1950 enosis referendum was a demonstration of their desire to strengthen their hold of the moral high ground, for which they have developed quite a taste in recent years.

They were collectively frothing over this alleged outrage, with Mustafa kicking off the mass hysteria, and have not let it go for the last ten days. They relished being the good guys again, perched on their moral peak looking down at the deceitful Greek Cypriots who could not be trusted because they were still dreaming about Enosis (that was the best joke of all).

The pseudo-PM Huseyn Ozgurgun, sanctimoniously, called the proposal a “most severe blow” to the talks. He has been trying to deal severe blows to the talks ever since taking over as ‘PM’ so why is complaining now? It seems even the custodians of the Denktator legacy enjoy smugly, occupying the moral high ground and having a go at the other side.

What our Turkish Cypriot brothers and sisters do not know, because they are relatively new to this game, is that unrelenting moral posturing over an extended period is guaranteed to backfire. All foreigners, who had dealings with us over the decades, grew tired of our constant marketing of our moral superiority and victimhood in the Cyprob and considered us insufferable, ball-busting bores.

MUSTAFA, reveling in his moral outrage went to Thursday’s scheduled meeting at the airport, demanding that Prez Nik took a clear stand against the legislature’s decision. Nik, meanwhile, had united with the rejectionists and condemned the Turks’ reaction after Monday’s national council meeting.

His statement was again a fight for the moral high ground. How could the Turkish Cypriots, show “such sensitivity to a simple reference to an historical fact,” but provoke us every year with “celebrations for the anniversary of the Turkish invasion?” His effort to reclaim the high ground only pissed off his former amigo who insisted, during Thursday’s meeting, that Nik took a clear public position against the proposal.

The wily Nik, agreed it was the wrong decision during the meeting but obviously refused to say so publicly and Mustafa walked out, sparking another round of moral sparring, over who had quit the meeting. It got quite funny – Mustafa claimed that Nik stormed out of the room banging the door and while Nik had done so, he came back. Mustafa and his team meanwhile walked out. Nik won this battle as Eide confirmed that it was the Turkish side that left and refused to come back. We are climbing back to the moral peak.

IF THE Turkish Cypriots seriously believe that the proposal about the Enosis referendum was an indication of the future intentions of the Greek Cypriots, they must not have a clue what we are like. They have not noticed our time-honoured talent for grandiose, meaningless gestures and hollow rhetorical flourishes that are part of our political theatre.

The Elam proposal about the Enosis referendum was part of this tradition. It suggested that the anniversary of the enosis referendum, held in the churches in 1950, was marked by public schools. And how would this be done? Some education ministry mandarin would write a classically boring 500-word essay about the burning desire of Greek Cypriots for enosis, 67 years ago, and it would be read at schools to kids, who would not listen to a word because they would be playing on their mobile phones.

This pointless exercise is more likely to put schoolkids to sleep than ignite their desire for Enosis. Among the Greek Cypriots the desire for Enosis was extinguished decades ago. Dr Eleni Theocharous might claim she would set herself alight in Syntagma Square when Enosis was achieved but this is because she knows it will never happen.

DURING the 1950 referendum 99 per cent of churchgoers voted in favour of Enosis. If a similar referendum was held today, 99 per cent would vote against it for obvious reasons. We Greek Cypriots might pretend to be great idealists and proud of our Greek heritage, but like our politicians, the only thing we really care about is our personal interest and material well-being.

What overpaid, over-fed, Greek Cypriot, with two cars and holiday home in Protaras would vote for Kyproulla to become a province of an impoverished, bankrupt country staring into the abyss, on the verge of being kicked out of the eurozone and facing decades of deep recession?

How many of our public parasites would want to become part of a country that would pay them a quarter of what Kyproulla pays them every month for the sake of what once was a noble idea? How many public-sector retirees would give up their lucrative pensions and become paupers in Greece for the sake of Enosis?

THERE were even reactions against the legislature’s decision from people in the parties that supported it. A couple of obscure Diko councillors quit the party in protest, while Edek MEP Demetris Papadakis posted a rant against the decision on his Facebook page.

Edek and Diko, together with Akel, back in the seventies, considered Enosis a dirty word and were always promoting anti-Greek sentiments. The Makarios camp to which, they all belonged, openly cultivated hostility towards Greece and Greeks, led by the Archbishop himself.

Our good friend Alecos Constantides mentioned in his Alithia column on Wednesday that the Elamites were elected to parliament with the backing of the Paphos bishop, who also belonged to Makarios’ anti-Enosis, anti-Greece establishment.

All these jokers have today remembered the Enosis referendum of 67 years ago and want it honoured by public schools. And the jokers in the north pretend they are taking this farce seriously beating their breasts and demanding a corrective statement by Nik.

This is a sorry tale of Much Ado About Nothing, but unfortunately it was not written by Shakespeare.

Our View: Anastasiades is starting to sound like the rejectionists