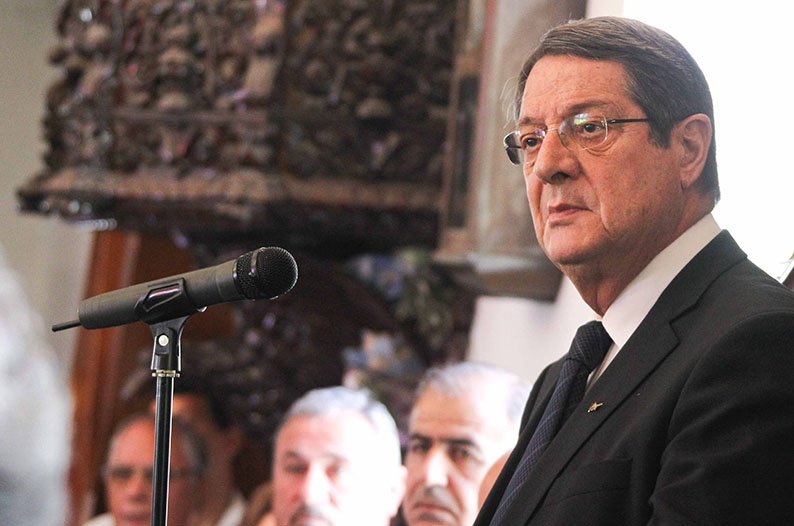 THE EVENTS of the last ten days, with the two sides engaging in recriminations and the all-too familiar blame game rearing its ugly head, have renewed suspicions that President Anastasiades’ commitment to a settlement was wavering. The way he handled the legislature’s approval of the Elam proposal for school celebrations of the 1950 Enosis referendum and the eagerness with which he threw himself into the blame game immediately after Thursday’s abruptly ended meeting with Mustafa Akinci strengthened these suspicions.

At the news conference he gave on Thursday to explain why the meeting had ended prematurely, he did not speak like someone who remained committed to the process and wanted to keep it alive at all costs. Instead he went on the offensive, suggesting that Akinci had lied in claiming he had abandoned the meeting accused him of finding pretexts to avoid negotiations and repeated the Monday’s national council statement telling the Turkish Cypriots not to interfere in the decisions of Greek Cypriots.

He may have felt he had a duty to set the record straight, but there was also a sense he was playing to the gallery. Rather than try to play down what had happened, attributing it to misunderstanding and propose a way forward he worryingly opted for the self-righteous approach that would make the resumption of the talks more difficult. Admittedly, it was not the first time the president has acted in this way. He had dug in his heels after the failure of the second round of Mont Pelerin talks in Switzerland, only to put aside his conditions and agree to attend a conference Geneva subsequently.

Perhaps this was another example of this erratic behaviour with Thursday’s grandstanding followed by a less confrontational approach the next day. On Friday, he changed tack, announcing that he had “no desire to engage in an unnecessary blame game, particularly after the UN special advisor publicly described what happened (on Thursday).” He decided to be gracious, but still could not resist the temptation to remind us that Espen Barth Eide had confirmed his version of Thursday’s event was the correct one. He had won this blame game and was ready to move on, urging Akinci to attend their next scheduled meeting. His government spokesman, however, was not on message, keeping the blame-game alive by telling reporters on Friday that the Turkish Cypriots’ walkout had been planned.

The indications are that he has decided to focus on his drive for re-election, with presidential elections only a year away. He may have decided that the talks were distraction and chose to return to the political comfort zone of blaming Turkish intransigence and maximalist demands for the failure of the process. For several weeks now, the presidential palace analysis regarding the talks’ process was that President Erdogan was not ready for a deal and wanted to wait until after April’s referendum that would change Turkey’s constitution. This was some kind of justification for the slowing down of the process we have witnessed since the Geneva conference.

It is possible this analysis was based on Turkey playing hardball on certain issues, but Anastasiades is experienced enough to know that the Turks drive a hard bargain. The way to move things forward was to fully engage in this give-and-take with the Turkish side rather than go through the motions while arguing that Ankara was not ready for a deal. The facts do not really support this version of events. If Turkey did not want a deal it has been offered many opportunities to lead the talks to deadlock and the inevitable collapse of the process, but it has not taken them.

Despite the many setbacks it has continued to support process. And nobody could buy the claim that Erdogan has been doing this because he did not want Turkey to be blamed for the collapse of the talks. This is a man who thrives on confrontation and would not be fazed by the prospect of some mild criticism directed at Turkey in the event that Ankara was deemed responsible for the collapse of the talks. If he did not want a settlement, as our government is now suggesting, there would not be talks and another conference on Cyprus scheduled for next month. Is the government guilty of the same wishful thinking exhibited by the rejectionists who insist, despite the lack of evidence, Turkey did not want a deal?

Anastasiades, lately, is sounding like the rejectionists, with whom he was fully aligned on the issue of the enosis referendum. Akinci’s demand for the president to take a clear public stand against it might not be about the issue itself, but a way of gauging how committed the president was to a deal, given his recent backpedalling. Someone sincerely committed to reaching a deal would not engage in defiant grandstanding over such a trivial matter.

Tales from the Coffeeshop: The bloodless battle for the moral high ground

An open wound in the heart of the capital