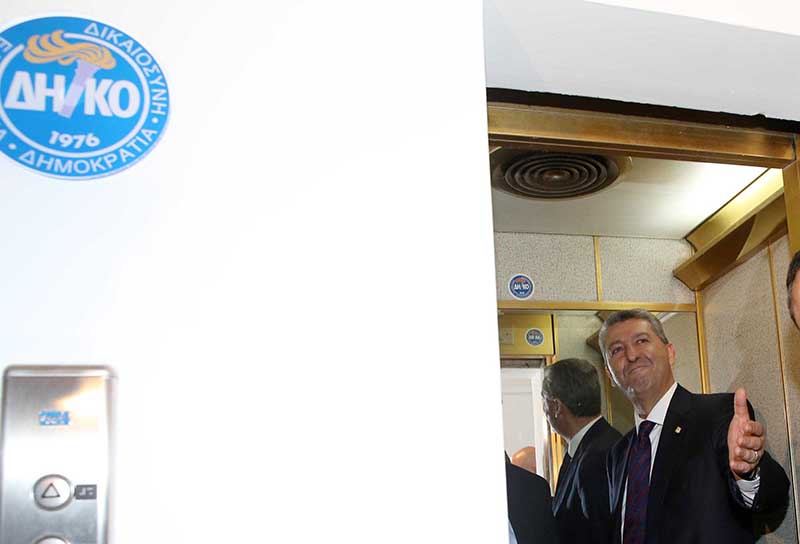 Lillikas in the lift at Diko headquarters on Tuesday night

Talks to find a single presidential candidate among the parties supporting a hawkish strategy in the Cyprus problem did not get off to a good, if unofficial, start on Tuesday night as potential candidates Diko leader Nicolas Papadopoulos and Citizens’ Alliance chief Yiorgos Lillikas failed to find any common ground.

The two men, each flanked by close associates, discussed the criteria for picking a candidate for next year’s presidential elections.

Tension between them has reportedly been mounting since last week when Lillikas unofficially announced his bid for the presidency despite earlier consensus that the self-proclaimed ‘centre parties’ – Diko, Edek, the Citizens’ Alliance, the Solidarity movement and the Greens – would rally behind a single candidate agreed jointly.

It is understood that Lillikas’ leaked intentions sought to create a fait-accomplis aimed at Papadopoulos and Solidarity’s Eleni Theocharous, who also harbour presidential ambitions.

“There is more uniting us with Diko than separates us,” Lillikas said after the meeting at Diko’s headquarters.

Both men said the meeting had been held in a good and friendly atmosphere.

Lillikas appeared to be backtracking on the announcement of his candidacy, saying a decision by the Alliance’s Supreme Senate on Sunday – to ratify a proposal for a presidential bid by the party’s leader – will merely be a “guiding principle”.

Papadopoulos said that for a candidacy to be backed by all ‘centre parties’ it must first be discussed by all five parties.

“A unilateral announcement is, of course, respected, but it doesn’t help the whole effort,” he said.

The unwritten law in Cypriot politics is that no one can be elected president unless backed by one of the main parties – a mantra recently repeated by Lillikas in an interview – but the rest of the ‘centrists’ believe and argue otherwise, even as no President of Cyprus has ever been elected without the backing of Akel or Disy.

The five ‘centre’ parties agree that a rejectionist – or ‘assertive’, in their own words – Cyprus-problem stance is enough to bring them together behind a single presidential candidate with the sole aim of overturning the two big parties’ stance of supporting a bi-zonal, bi-communal federation.

But Lillikas had already showed signs of breaking ranks as early as January’s Geneva conference on Cyprus when he attended a cocktail reception for all delegations, which the rest of the ‘centre’ party leaders refused to attend.

An upcoming discussion forum on the Cyprus problem, scheduled for Friday, seems to be having the same fate – a statement on Tuesday said it was organised by Diko, Edek, the Greens, and Solidarity, with the Citizens’ Alliance conspicuously absent.

Lillikas’ decision to unofficially announce his candidacy was met with harsh criticism by the rest in the burgeoning alliance.

“If the patriotic front has more than a single candidate, it is not going to elect a president, and we will perpetuate the policies we are now criticising,” Theocharous said on Tuesday morning, casting doubt on whether the Citizens’ Alliance members will rally behind Lillikas on Sunday, as expected.

“There are many within the [Citizens’ Alliance] Senate who wouldn’t want Mr Lillikas’ move to undermine the effort of the rest of the parties to change the strategy.”

Edek leader Marinos Sizopoulos complained that Lillikas went ahead with the move without so much as consulting with his party – a courtesy he granted Solidarity and the Greens.

“There has been no consultation with Edek, not even a meeting,” he said, before addressing the fact that the ‘patriotic front’ is a disparate mix of parties representing different social and economic policies.

“We are quite far apart with some parties, but, in any case, the distance between us is much shorter than between us and Akel or Disy.”

Many in Edek refuse to let go of the fact that when the party decided to support Lillikas in the 2013 presidential campaign he publicly pledged not to capitalise on his electoral gains by founding a new party but did just that two months after the election.

In a statement, the Greens said that all parties, with the exception of Disy and Akel, should run a single candidate for president, and added a barb against Lillikas.

“Each one’s personal ambitions should be cast aside for the sake of Cyprus,” the party said.

Cavusoglu: Cyprus problem only one in region that shows any hope

Ramos gets Real out of jail after early battering