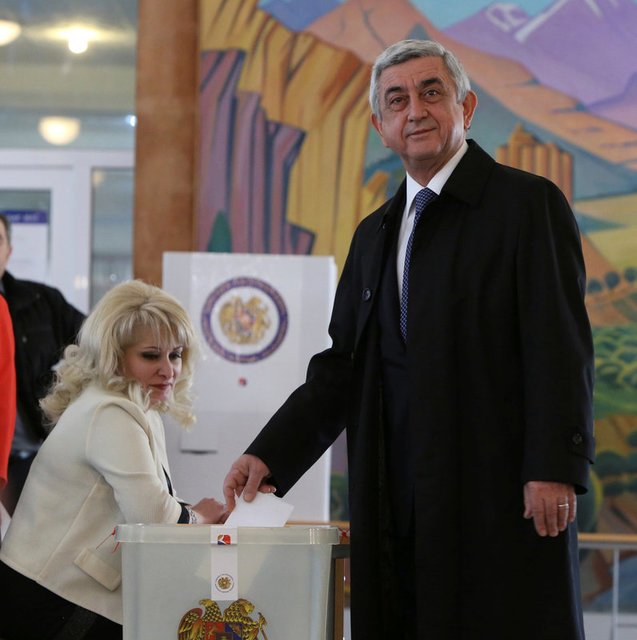 Armenia's President Serzh Sarksyan casts his ballot during a parliamentary election at a poling station in Yerevan, Armenia April 2, 2017

The Republican Party of Armenia (RPA) had 49.12 per cent of the votes while the opposition Tsarukyan Alliance led by wealthy businessman Gagik Tsarukyan gathered 27.32 per cent.

The government-loyal Dashnaktsutyun Party had 6.57 per cent and the opposition bloc Yelk (“Way Out”) 7.77 per cent, enough for both to enter parliament.

Central Election Commission chairman Tigran Mukuchyan told the CEC meeting the figures were based on results from all 2,009 polling stations.

He said nothing about violations of election rules. The prosecutor’s office said it had been reviewing media reports of violations during the voting and count process.

Opposition parties said they had also filed complaints on irregularities to the prosecutor’s office, but gave no further details.

An exit poll by Baltic Surveys/The Gallup Organisation, reported by Armenian television shortly after polls closed, put RPA on 46 per cent of votes cast, with the Tsarukyan Alliance on 25 per cent and Dashnaktsutyun 5 per cent.

Republicans and Dashnaktsutyun, coalition partners in the current parliament, could create a coalition again, getting the right to name the future prime minister, who is expected to be the incumbent Karen Karapetyan.

The election was Armenia’s first under a new constitution, approved in a December 2015 referendum. Parliament, rather than voters, will elect the president for the first time in 2018.

Sarksyan, 62, leader of the RPA and president since 2008, has repeatedly denied the constitutional changes were engineered to allow him to retain influence in the former Soviet republic after his final presidential term ends next year.

The new system reduces the presidency to a ceremonial post and increases the powers of the prime minister. Critics say Sarksyan could keep wielding executive power by becoming prime minister in 2018.

Many Armenians accuse the government of corruption and of mishandling the troubled economy.

Armenia depends heavily for aid and investment on Russia, which has been hard hit in the past three years by an economic downturn. Armenia has felt the impact, with growth falling to 0.2 per cent last year from 3.0 per cent in 2015.

International observers will present their conclusions on the election later on Monday.

Film review: Ghost in the Shell **