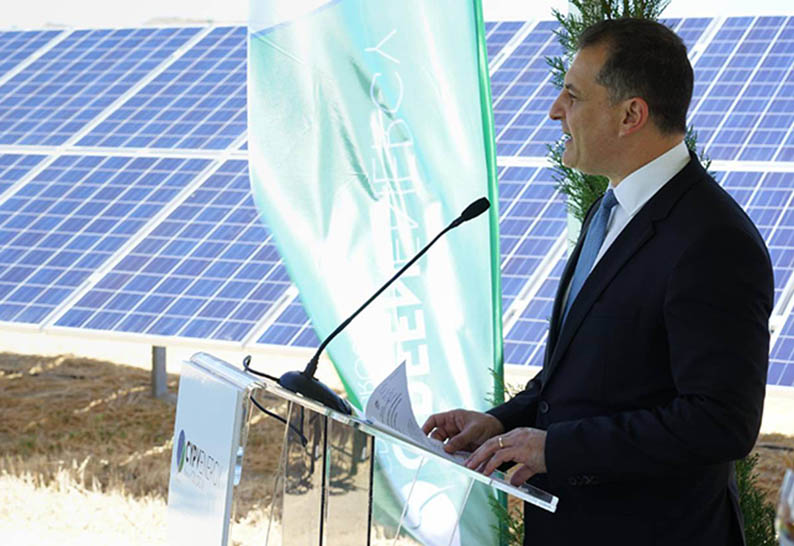 A solar plant financed by the EBRD was inaugurated on Thursday, on the sidelines of its annual meeting, which concluded in Nicosia.
The park in Nisou, in the outskirts of Nicosia, includes five solar plants and when all are on stream, they will account for 12 per cent of the country’s solar energy production.

On Thursday, one of the clusters was inaugurated, during an official ceremony. It is a 1.5 MW solar power plant which sent its first electricity into the national grid in the presence of the minister of energy, Giorgos Lakkotrypis and EBRD Managing Director for Energy and National Resources, Nandita Parshad.
Parshad said the ceremony demonstrated the bank’s leadership in enabling and financing renewable projects, adding that the five solar plants, including the one which came on-streamon Thursday, were important not only because of more clean energy and fewer emissions in Cyprus, but they also demonstrated the energy revolution going on worldwide, to which the EBRD was deeply committed to support.

Lakkotrypis said Cyprus, aiming to strengthen its security of energy supply and enhance its energy self-sufficiency, has been working hard to accelerate the deployment of renewables on the island and to create a competitive electricity market.

The five solar plants , he said, were a tangible example of best private and public sector cooperation, and would contribute to efforts to increase the country’s solar generation capacity, achieve renewable energy targets.

The unveiled solar power generator was built jointly by CYPV Energy Ltd, which has in total built three EBRD-financed solar generators, including a 1.5 MW plant in Dhali and a 4.4 MW plant in Frenaros, Cyprus’ largest to date.
Dimitri Morozov from CYPV Holdings Ltd said that thee solar energy projects were a result of excellent cooperation between all parties.

Two other solar plants, financed by the EBRD under the same project, were built jointly by Cyprus-based Athinodorou & Poullas Investments & Properties Ltd, a part of Athinodorou Group and T.P. Timotheou Holdings Ltd.

In total, the EBRD loans of €10.85 million financed the five solar plants for a total installed capacity of 11.9 MW in the Famagusta and Nicosia districts. The plants will produce more than 21.420 megawatt-hours per year in total of clean energy, saving over 15,470 tonnes of CO2 emissions every year.

They will increase existing photovoltaic capacity in Cyprus by 12 per cent, bringing the total of renewables in the country’s energy mix to about 9 per cent and contributing to its Paris climate talks (COP21) commitment to reduce greenhouse gas emissions by 40 per cent by 2030 compared with the 1990 level. Cyprus is a country with high solar potential, but it remains dependent on fossil fuel imports.

Alternative country to be woven in Larnaca

EU demands urgent talks with US over airline laptop ban

Another motorcyclist injured on stolen bike