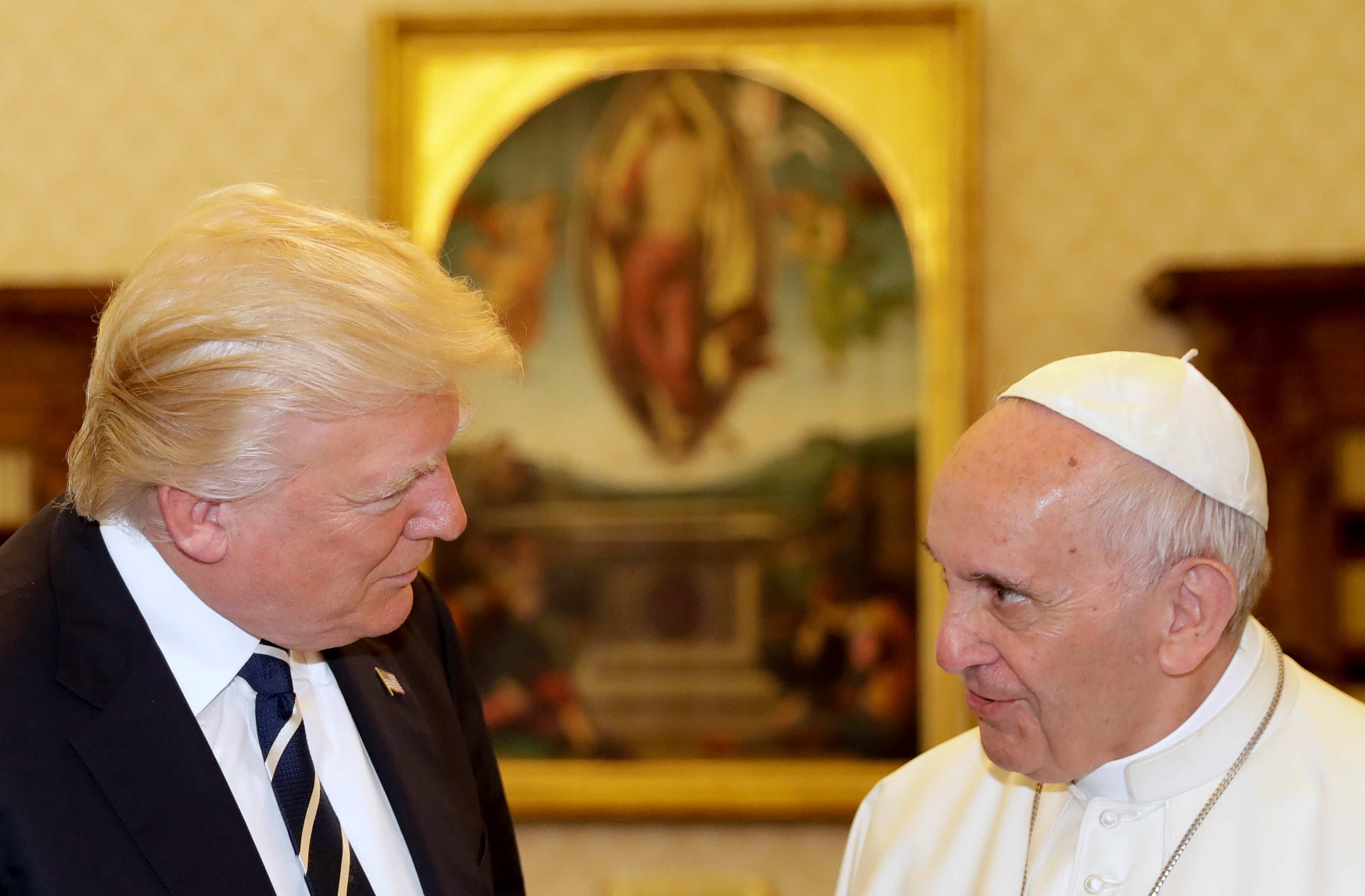 Pope Francis talks with U.S. President Donald Trump during a private audience at the Vatican, May 24, 2017. REUTERS/Alessandra Tarantino/Pool

Pope Francis urged US President Donald Trump to be a peacemaker at their first meeting on Wednesday after they exchanged sharp words last year, and Trump promised he would not forget the pontiff’s message.

Under clear blue skies, Trump received a tribute from the Swiss Guard in a Vatican courtyard when he arrived.

He entered a small elevator taking him to the third floor of the Apostolic Palace and, after a long ceremonial walk past frescoed corridors, shook the pope‘s hand at the entrance to the private study that the frugal pontiff uses only for official occasions.

Before the door of the wood-lined elevator closed, a Vatican protocol official was heard quipping to the president that it was not “like Trump Tower in New York”.

Francis smiled faintly as he greeted Trump outside the study and was not as outgoing as he sometimes is with visiting heads of state. Trump, seeming subdued, said, “It is a great honour.”

Even when the two were sitting at the pope‘s desk in the presence of photographers and reporters, the pope avoided the small talk that usually occurs before the media is ushered out.

The two spoke privately for about 30 minutes with translators.

Both men looked far more relaxed at the end of the private meeting, with the pope smiling and joking with Trump and his wife Melania.

Francis’s interpreter could be heard translating a comment by the pope to the First Lady: “What do you give him to eat?”

Francis then gave Trump a small sculptured olive tree and told him through the interpreter that it symbolised peace.

“It is my desire that you become an olive tree to construct peace,” the Pope said, speaking in Spanish.

Trump responded: “We can use peace.”

Francis also gave Trump a signed copy of his 2017 peace message whose title is “Nonviolence – A Style of Politics for Peace”, and a copy of his 2015 encyclical letter on the need to protect the environment from the effects of climate change.

During his election campaign, Trump said scientific findings that human economic activity contributed to global warming were a hoax. As president, he has proposed deep cuts for the Environmental Protection Agency and the elimination of many environmental regulations.

As Trump and the pope said goodbye at the door of the study, Trump told him: “Thank you, thank you. I won’t forget what you said.”

Asked how the meeting with the pope went, Trump said: “Great. He is something. He is really good. We had a fantastic meeting.”

A Vatican statement said the meeting was “cordial” and that the Vatican hoped there could be “serene collaboration” between the US government and the American Catholic Church, including “assistance to immigrants”.

The US Catholic Church hierarchy opposes Trump‘s attempt to cut federal assistance for cities that give sanctuary to illegal immigrants. It also opposes his plan to build a wall on the US border with Mexico. The pope said last year a man who thinks about building walls and not bridges is “not Christian”.

Trump, who was a candidate at the time, responded that it was “disgraceful” of the Argentine-born pope, who represents just over half of the world’s two billion Christians, to question his faith.

The meeting with the pope was the third stop on Trump‘s nine-day foreign tour, and part of his world tour of religions after meeting leaders of Muslim nations in Saudi Arabia and visiting holy sites in Jerusalem.

Trump at first did not plan to stop in Rome during his visit to Europe, which some in the Vatican saw as a snub. When he changed his mind, the Vatican squeezed him in at 8:30am on a Wednesday morning, an unusual day and an unusually early time.

He later flew to Brussels where he was to meet Belgium’s king and prime minister on Wednesday evening before a day of meetings with European Union and Nato leaders on Thursday.