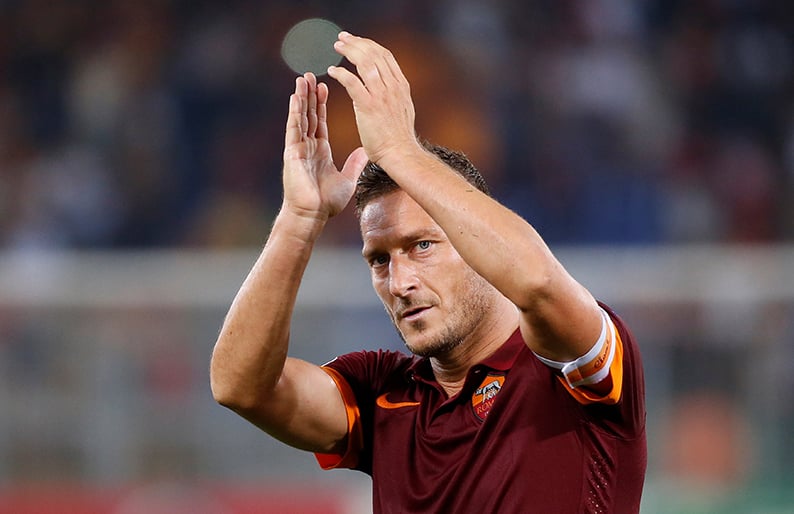 AS Roma’s home game with lowly Genoa on Sunday will bring the curtain down on Francesco Totti’s 25 years at the club but, after several months of intrigue, it is not known if the talismanic playmaker will retire altogether.

Second-placed Roma had made it clear they would not offer the 40-year-old Totti another contract but he refused to play ball until Thursday, when he finally announced it would be his last game for them.

Even then, he hinted that he could continue his career elsewhere – something previously unthinkable for one of the sport’s most loyal players.

“From Monday, I’m ready to go again. I’m ready for a new challenge,” he said, adding that football was a passion he needed to fuel.

Roma have been criticised for their handling of what has become an uncomfortable situation for them as coach Luciano Spalletti made little use of Totti this season.

With Napoli, who are third, just a point behind in the standings, there will be no time for sentiment, either, as Roma need to win to make sure of finishing runners-up to Juventus and qualifying for the Champions League group stage next season.

Third place would mean going into the final playoff round, where Italian teams have been eliminated in six of the last eight seasons – with Roma themselves among the victims last August. Napoli visit mid-table Sampdoria on Sunday.

An exasperated Spalletti said earlier this month that he would not have become Roma coach if he knew it was going to be such a complicated issue and said his job was to manage Totti as a player, not his legacy.

Roma sporting director Ramon Rodriguez “Monchi” reiterated recently that Totti had agreed this season would be his last, while chief executive Umberto Gandini said the player’s contribution would “continue in another way” next term.

Until Thursday, however, Totti had refused to confirm or deny suggestions that he wanted a further season at his beloved club.

Supporters of Roma’s arch-rivals Lazio, who share the Olympic Stadium, could not resist a dig at their neighbours.

“You have not received respect from either your fans or your club. We tell you sincerely that we are sorry,” Lazio’s hard-core fans said in a statement addressed to Totti last Monday.

“I’m sorry that this story has had some sad moments,” he said. “The truth is known to Totti, Spalletti and the club, and only they can answer certain questions.”

Zdenek Zeman, one of 16 coaches Totti has played under at the club, added: “I haven’t heard that he wants to leave…Do I think he’ll leave? No, I hope to see him on the pitch again.”

Lukaku ‘will stay our player’, says Tuchel after dropping star