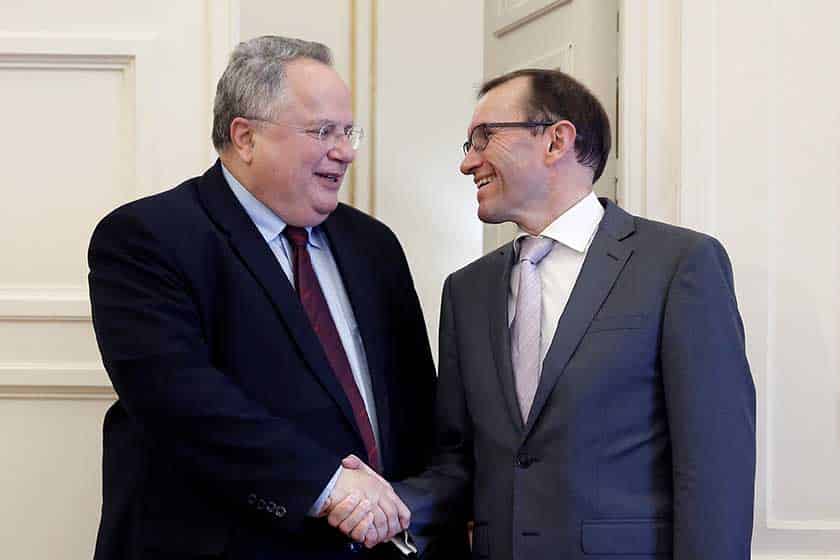 The United Nations is not giving up on efforts to find common ground to resume the Conference on Cyprus in Geneva, UN special adviser Espen Barth Eide said on Monday, seeking to dispel the gloom that has befallen the talks after last week’s stumble.

Following a two-hour meeting with Greek Foreign Minister Nicos Kotzias in Athens, Eide said trying to revive the conference, largely viewed as the ‘final stretch’ to a comprehensive settlement of the Cyprus problem, is “an ongoing process”.

“It is not easy but we are not giving up,” the Norwegian diplomat said.

Eide said his talks in Athens had been “constructive and useful” and that he will now go to Ankara to continue his efforts there.

“We must be prepared because it is an international issue, but the final decision must be taken in Cyprus by the two leaders, on whether they are prepared to find a common platform for a new Geneva Conference,” Eide said.

“The focus now is not so much on the substance of the talks but how these will be organised and on deciding the agenda.”

Talks between President Nicos Anastasiades and Turkish Cypriot leader Mustafa Akinci stalled last week, after Eide tried to broker agreement on the agenda of a Conference on Cyprus in Geneva, to be attended by the two sides, Cyprus’ three guarantor powers (the United Kingdom, Turkey, and Greece), and the European Union.

Anastasiades had insisted that the first item on the agenda should be the issue of security and guarantees, before other chapters could be addressed, while Akinci argued that all issues should be discussed interdependently.

Eide said the UN was “ready for more thoughts on the issues that concern the guarantor powers” but noted that “we are not there yet”.

The UN envoy said he was not asking “anyone to put pressure on anyone” but also voiced concern that “the process is in serious trouble”.

He expressed his conviction that its failure “is not in the interests of Greece, Turkey or any other international actor”.

“Even though it concerns the Cypriots, failing to find a solution could have international repercussions, impacting relations between Greece and Turkey, Turkey’s relations with the EU and the general situation in the Mediterranean,” Eide argued.

He also pointed out that the two sides had covered a lot of ground and were “very, very close” to an agreement, “actually more close than most people seem to understand”.

In his own remarks, Kotzias said Greece steadfastly supports the continuation of intra-communal talks and has insisted on an open-ended session since the beginning.

After the two-hour meeting, Kotzias – who, in a letter to UN Secretary-General Antonio Guterres last month, accused Eide of lobbying for Turkey, only to be immediately rebuffed – said he has “always had very interesting and sensible discussions” with the UN diplomat.

Turkey, the Greek FM said, has never agreed to a substantial discussion of the issue of security and guarantees, instead looking at the Cyprus problem “solely through the prism of its own interests”.

“I hope that Turkey will, at some point, appear sensible enough to prepare an international conference in Geneva with the goal of ridding Cyprus of the 1960 treaties,” Kotzias said.

Turkey, Kotzias said, never responded to the proposals put forth by Greece on the so-called ‘international’ aspect of the Cyprus problem – security and guarantees.

“It just refuses to discuss this issue with us,” he said.

The Greek foreign minister reiterated that Greece would not accept a transition period of the 1960 Treaty of Guarantee, which Turkey claims affords it the right of unilateral intervention in Cyprus.

“That for a period of time [post-solution] Turkey will have the right to intervene?”

Such a transition, however, could be considered with regard to Turkish troops on the island, Kotzias conceded.

“The Turkish army has to go,” he said.

“Naturally, any departing army, just like the Soviet troops departing from East Germany, requires a timeline for departure.”

‘Good atmosphere but nothing new in EU talks with Erdogan’

A tribute to a pioneering artist