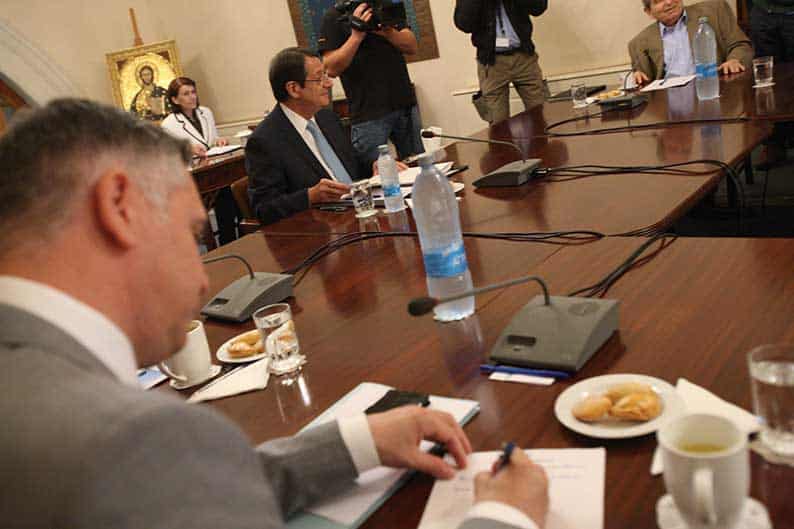 The majority of political leaders were non-committal on Friday leaving the National Council ahead of Sunday’s meeting between President Nicos Anastasiades in New York, the UN Secretary-General Antonio Guterres and Turkish Cypriot leader Mustafa Akinci.

The National Council was called by Anastasiades to brief political leaders on his upcoming meeting with Guterres and Akinci at UN headquarters in New York.

Political leaders, except those of Diko and Edek, left the meeting without making any comments.

Diko leader Nicolas Papadopoulos said that he was not satisfied by what the president told them, and called for a change of strategy as to the settlement negotiations.

“I fear that at the moment, not only do we not have a strategy, but our positions are not convincing,” Papadopoulos said on his way out. He added that the president goes back and forth on his positions.

Edek’s Marinos Sizopoulos warned that the New York meeting could be a trap.

“The president could not of course decline the invitation, but this meeting might entail pitfalls. We have advised the president to be careful to avoid these pitfalls that might land our side in a difficult position,” Sizopoulos said.

Akel leader, Andros Kyprianou, said that he would speak only after the UN dinner, and wished good luck to the president.

Disy head Averof Neophytou wished the president good luck in a tweet, whereas the leader of the Citizens’ Alliance tweeted that political leaders pledged to refrain from criticism until the end of the meeting. “We will honour it,” Lillikas said.

Earlier in the day, Anastasiades had a telephone conversation with Greek Prime Minister Alexis Tsipras.

Deputy Government Spokesman Victoras Papadopoulos said following the meeting, that the president briefed political leaders in detail as to what took place since last week’s National Council meeting, and on the results of the visits earlier in the week of UN Special Adviser Espen Barth Eide in Athens and Ankara.

Guterres had invited the two leaders to a dinner on Sunday that is hoped to produce agreement on the resumption of the Geneva conference on Cyprus.

The talks stumbled on May 17, when both leaders agreed to the need for a resumption of the Geneva conference but Anastasiades proposed that security, guarantees, and territory be tackled first, in isolation, before the open-ended conference touches on other issues for as long as it takes.

This was rejected by Akinci, who countered that the agreement has always been that all issues are discussed interdependently.

The deputy spokesman said that the Anastasiades’ proposal on how to proceed with the settlement negotiations, “is the most realistic and feasible one” and the only one that can take the talks a step further.

The president, Papadopoulos said, made a call for unity in view of the critical meeting in New York.

Last Friday, Eide officially announced ending his efforts to facilitate agreement between the two sides over the issue and said he would consult with Guterres on the way forward.

A diplomatic source said the secretary-general’s intention is not to impose the way forward on the two leaders but to listen to their views, with regard to both where things stand and, crucially, the next steps.

Ready to move ahead with Paphos-Polis road