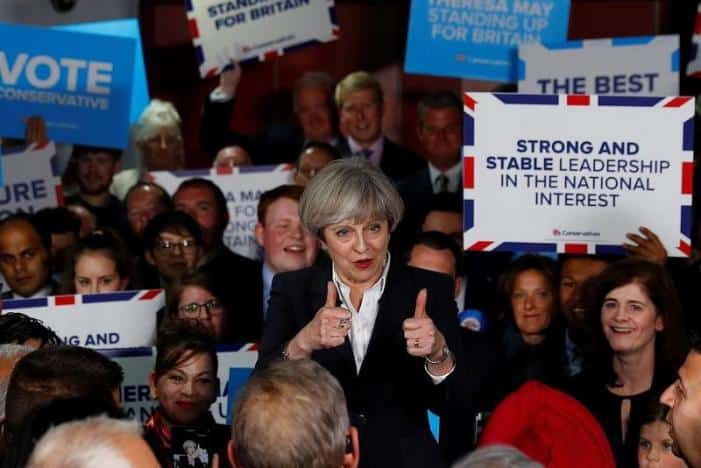 Once again Britain’s general election has been disrupted by a deadly attack on civilians. This weekend’s assault by jihadists at London Bridge and the Borough Market area will keep security issues at the fore in the final days of campaigning before Thursday’s vote.

But the recent violence is unlikely to shift voting intentions one way or another, any more than the May 22 suicide bombing in Manchester did. Rather, it’s the surge in support among young people for the main opposition Labour Party that has been shifting the polls.

When Prime Minister Theresa May called a surprise early general election on April 18, her ruling Conservative Party was so far ahead in the polls that she appeared on course for a landslide victory, reinforcing her authority in the crucial Brexit negotiations with the European Union. But since then the gap has narrowed, to such an extent that some projections suggest May will not win an overall majority. The result will hinge upon how many young people turn out to vote in an election that has exposed a stark generational divide.

Britain’s two main parties have traditionally divided along class lines, with Labour building on its working-class base and the Conservatives bolstered by their middle-class support. But now age, even more than class, distinguishes the two parties. Pollster Ipsos Mori shows Labour outpolling the Conservatives by 30 or so percentage points among 18 to 34-year-olds but trailing behind by a similar margin among those 55 and older.

The importance of age in modern British politics was already apparent in last year’s referendum on whether to leave the European Union. The “exit” camp narrowly beat out those who wanted to remain, 52 per cent to 48 per cent. But that narrow margin disguised a chasm between young and old. According to pollster YouGov, just 29 per cent of 18 to 24-year-olds supported exit, compared to 64 per cent of those aged 65 or older. Voters under 50 backed staying in the EU, whereas 50 to 64-year-olds as well as those 65 and older supported leaving.

The general election is not a rerun of the referendum. For one thing, 3,303 candidates from dozens of parties are contesting a total of 650 seats, whereas the Brexit poll was on a single issue that cut across party lines. For another, the decision to leave the EU is now wearily accepted, even by many who voted to remain. That has stymied the hopes of the pro-European Liberal Democrats, who dreamed of restoring their fortunes in the centre of politics by mobilising the more youthful “remain” voters with their promise of a second referendum on the outcome of the Brexit talks. Instead the party is again likely to win only a handful of seats.

Labour, not the Liberal Democrats, is attracting younger voters in what has become a two-party race between them and the Conservatives, outside Scotland and Northern Ireland. Labour has made a blatant pitch for younger voters by promising the abolition of university tuition fees and a big expansion in publicly funded childcare. The offer seems to be working, as Labour leader Jeremy Corbyn, a political lookalike to America’s Bernie Sanders (who said he was “impressed” by Corbyn on a recent trip to Britain), attracts admiring youthful crowds on the campaign trail.

The prominence of generational issues in the election reflects the divergent fortunes of young and old since the 2008 financial crisis. Young workers have had a rough ride since then. Though jobs have been plentiful, real wages for 20-year-olds have fallen. By contrast, real incomes for those who are 60 and older have risen. Austerity has brought cuts in working-age benefits but not to state pensions, which are protected by a “triple lock” ensuring they increase each year by the inflation rate, growth in average earnings, or 2.5 per cent – whichever is highest.

Enjoying apparently impregnable support among the retired, May attempted to curry favour among young voters with plans to trim the generosity of state help for the old, including the replacement of the triple lock with a “double lock,” which dropped the 2.5 per cent minimum. Her most controversial idea was to get older people to pick up more of their social care bill by drawing down most of their assets, including the value of their homes – deferring payment until after they die. The proposal backfired, as it was instantly dubbed a “dementia tax”. The prime minister was forced into a swift U-turn that did nothing for her supposed “strong and stable” leadership.

Despite May’s misstep over social care and the upsurge of support for Labour, fuelled by generational gripes among younger people, most pollsters continue to think that she will win the election even if the scale of such a victory is now quite uncertain. The main reason is that turnout differs by age. There are not just more older people as Britain ages; they are also much more likely to vote. In the Brexit referendum 90 per cent of those 65 and older turned out to cast their ballots. This contrasted with 64 per cent for people aged 18 to 24 and a similar share for 25 to 39-year-olds.

Different expectations about turnout explain the divergence between polls. Those showing Labour snapping at the heels of the Conservatives assume a high turnout among younger people, based on their declared intentions. By contrast, polls showing the Conservatives comfortably ahead assume that actual turnout will be more in line with past experience.

The generational tension revealed in the election is a taste of what is to come in Britain as the bills for an aging society continue to rise. And the country is not alone. Italy’s general election will pit the incumbent Democratic Party, supported by older voters, against the insurgent Five Star Movement, which appeals to discontented youth. Population ageing, the silent force behind so much economic and social change, is transforming politics as well.

Paul Wallace is a London-based writer. A former European economics editor of The Economist, he is author of The Euro Experiment, recently published by Cambridge University Press.

Australia pulling out of Cyprus’ UN police after 53 years

Our View: Teaching unions the real enemy of education