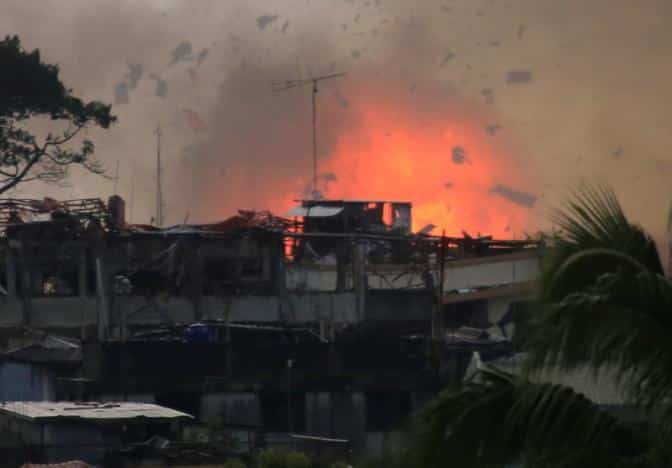 Debris and fire is seen after an OV-10 Bronco aircraft released a bomb, during an airstrike, as government forces continue their assault against insurgents from the Maute group, who have taken over large parts of Marawi City, Philippines

Philippine aircraft and troops launched a renewed push against Islamist militants in a southern city on Tuesday and a military spokesman said the aim was to clear the area by the weekend Eid festival, although there was no deadline.

The offensive came amid worry that rebel reinforcements could arrive in the city after Eid al-Fitr, which marks the end of the Muslim holy month of Ramadan.

Fighting in Marawi City has entered a fifth week, and nearly 350 people have been killed, according to an official count. Fleeing residents have said they have seen scores of bodies in the debris of homes destroyed in bombing and cross-fire.

“We are aiming to clear Marawi by the end of Ramadan,” said military spokesman Brigadier-General Restituto Padilla, as army and police commanders met in nearby Cagayan de Oro city to reassess strategy and operations against the militants, who claim allegiance to Islamic State.

But he added: “We are not setting any deadlines knowing the complexity of the battle. We are doing our best to expedite the liberation of Marawi at the soonest time possible.”

The seizure of Marawi and the dogged fight to regain control of it has alarmed Southeast Asian nations which fear Islamic State – on a backfoot in Iraq and Syria – is trying to set up a stronghold in the Muslim south of the mainly Roman Catholic Philippines that could threaten the whole region.

President Rodrigo Duterte visited a school where people who fled from Marawi are being housed and apologised for their plight, especially since it was Ramadan.

“I will help you, I will rehabilitate Marawi, it will be a beautiful city again,” he said at the school in Iligan City, about 40 km (25 miles) from the battle zone.

Padilla said the military aimed to prevent the conflict from escalating after Ramadan ends.

“We are closely watching certain groups and we hope they will not join the fight,” Padilla said.

Some Muslim residents of Marawi said other groups could join the fighting after Ramadan.

“As devout Muslims, we are forbidden to fight during Ramadan so afterwards, there may be new groups coming in,” said Faisal Amir, who has stayed on in the city despite the battle.

Fighting was intense early on Tuesday as security forces made a push to drive the militants, entrenched in Marawi’s commercial district, south towards a lake on the edge of the city.

Planes flew overhead dropping bombs while on the ground, automatic gunfire was sustained with occasional blasts from artillery. Armoured vehicles fired volleys of shells while the militants responded with gunfire and rocket-propelled grenades.

Fighting later died down as heavy rain fell but had resumed by evening.

Military sources said troops were attacking the militants from three sides and trying to box them towards the lake.

“We are moving towards the centre of gravity,” he added, referring to the militants’ command and communications centre.

An army corporal near the front line told Reuters soldiers were tagging houses and buildings that had been cleared.

“We still have to clear more than 1,000 structures,” he said, adding infantry units were left behind at “cleared” areas to prevent militants from recapturing lost ground.

As of Tuesday, the military said 258 militants, 65 security personnel and 26 civilians had been killed. Hundreds of people are unaccounted for, with many believed to be hiding in the basements of the city.