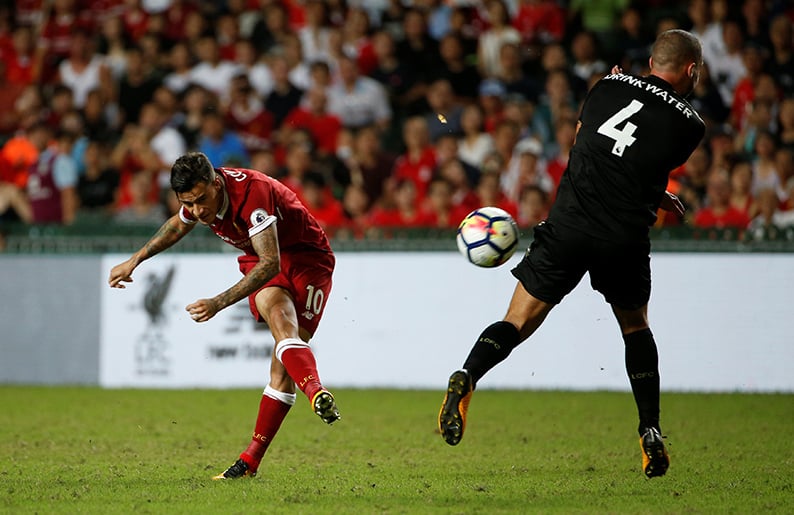 Juergen Klopp revealed he spoke to Philippe Coutinho about Barcelona’s attempts to sign the Brazilian before the playmaker delivered a match-winning performance to help Liverpool win the Premier League Asia Trophy against Leicester City on Saturday.

Coutinho has been the subject of a £70m bid by the Catalan giants, but Liverpool have said none of their key players is for sale ahead of the new season.

And the Brazilian responded in impressive fashion, setting up Mohamed Salah for his side’s first goal before scoring Liverpool’s second as the Merseyside club notched up a second Hong Kong win in four days, beating the 2016 Premier League champions 2-1.

“That’s not for you,” said Klopp when asked for the details of his conversation with the 25-year-old.

“Of course we have spoken. We were seven days pretty much all the time together and we found a moment when we could speak.

“Everybody knows Philippe Coutinho is a key player for us. I know he feels completely more than fine, comfortable in Liverpool. He loves the club, he loves the city. All of that is clear.

“But that he’s able to play tonight in a very difficult moment in the pre-season, and after all the sessions, it’s good to see and it shows his big potential.”

Liverpool won the four-team tournament after Klopp’s side came back from going behind to a goal from Leicester’s Islam Slimani after just 12 minutes.

Salah’s deft header levelled the scores eight minutes later before Coutinho claimed the winner a minute before halftime as Liverpool followed Wednesday’s victory over Crystal Palace with success against the 2016 champions.

In a game that was occasionally feisty, Klopp became embroiled in a touchline row with referee Bobby Madley, and after the game he called for greater protection for football’s creative players — echoing Crystal Palace manager Frank de Boer’s comments after his own side’s win over West Bromwich Albion earlier.

“Football is a difficult game to whistle for a referee,” Klopp said. “I know all these things.

“But these things are obvious for me, and that’s why I thought it would be nice if he could help the dribbling players a bit more because apart from the challenges, which everybody likes in football, these players make the difference, and these players bring people into the stadium.

“And that’s why we have to look after them a little bit.”

Klopp was delighted with his team’s performance over both games played this week in demanding conditions.

“Winning both games is a big thing,” he said. “We saw that not everything is working as we wanted it but a lot of things are already there and were here over the week.

“The boys did well.”

Cyprus issue about more than a bit of political horse-trading