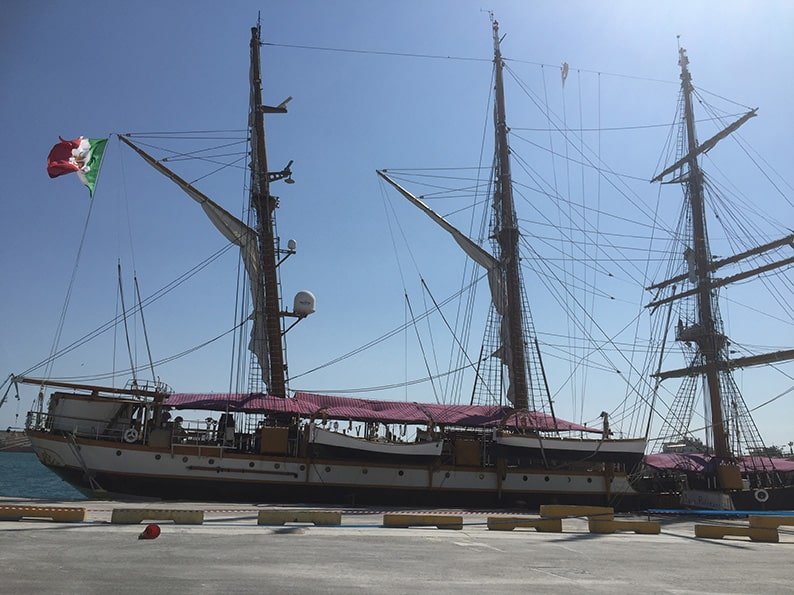 The Palinuro docked in Larnaca

The historic Italian training vessel “ITS Palinuro” arrived in Larnaca on Monday and will be open to the public until Thursday.
Giuseppe Valentini, commanding officer of the Palinuro, said that the ship is used by the Italian navy to train cadets as part of their three-year training course.
The vessel, he explained, was built in France in 1934 and was initially a fishing boat that was used to fish cod off the coast of Canada.

After World War II, the boat’s owner decided to sell it, at a time when the Italian navy was looking to buy a training ship.

“We bought it from its French owner in 1951,” Valentini added.

“After some years of renovation the ship was transformed from a fishing vessel to a training ship, it started its life under the Italian flag.”

The vessel can accommodate up to 145 persons.

On its latest training mission it has sailed in the Adriatic Sea, passed through Albania, Slovenia, and Montenegro. It will leave Cyprus on September 1 for Rhodes and then return to its port in Italy.
Cadet Ilaria Marangi said trainees learn a lot about the sea on board.

“It is very important for cadets to learn this kind of traditional sailing,” she said.

“We spend about two months on board, learning the power of the winds and the sea.”

Impeccably maintained in line with its original grandeur, the Palinuro is part of an elite club of vintage ships, a press release issued by the Italian embassy in Nicosia said.

During its many decades in operation, she has sailed more than 300.000 nautical miles through most major ports of the Mediterranean and Northern Europe.