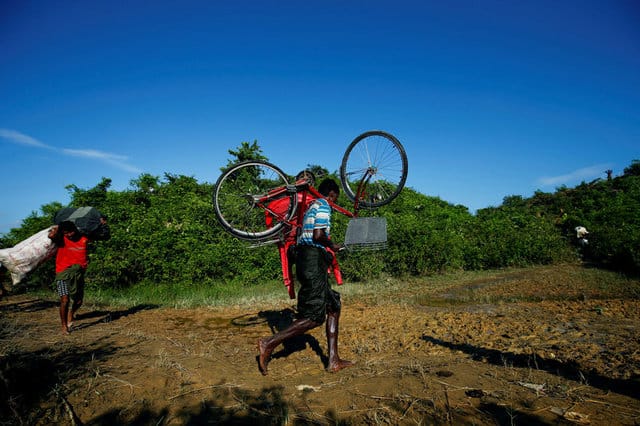 Rohingya people move towards No Man’s Land after crossing the Bangladesh-Myanmar border fence as they try to enter Bangladesh in Bandarban, an area under Cox's Bazar authority

Nearly 9,000 Rohingya Muslims, many sick and fearing for their lives, have fled the worst violence to grip northwest Myanmar in at least five years, while thousands more are stuck at the Bangladesh border or preparing to reach it in coming days.

A series of coordinated attacks by Rohingya insurgents on security forces in the north of Myanmar’s Rakhine state on Friday and ensuing clashes triggered the Rohingya exodus, while the government evacuated thousands of Rakhine Buddhists.

The United Nations, while condemning the attacks, pressured Myanmar to protect civilian lives without discrimination and appealed to Bangladesh to let those fleeing the military counteroffensive through.

“The situation is very terrifying, houses are burning, all the people ran away from their homes, parents and children were divided, some were lost, some are dead,” Abdullah, 25, a Rohingya from Mee Chaung Zay village in Buthidaung region told Reuters by telephone, struggling to hold back his tears.

He said he was preparing to flee.

At least 109 people have been killed in the clashes with insurgents, according to the government, most of them militants but also members of the security forces and civilians.

The treatment of about 1.1 million Muslim Rohingya in Myanmar has become the biggest challenge for national leader Aung San Suu Kyi, who has been accused by Western critics of not speaking out on behalf of a minority who have long complained of persecution.

The Rohingya are denied citizenship in Myanmar and regarded as illegal immigrants, despite claiming roots there that go back centuries.

The violence marks a dramatic escalation of a conflict that has simmered since October, when a similar, but much smaller, series of Rohingya attacks on security posts prompted a fierce military response. The United Nations said security forces likely committed crimes against humanity in that offensive.

Abdullah, a Rohingya villager still in Myanmar, said four out of six hamlets in his village had been burned down by security forces, prompting all residents to flee towards Bangladesh.

He and thousands of terrified villagers gathered at the Kyee Hnoke Thee village at the foot of the Mayu mountain range.

Together with his wife and five-year-old daughter Abdullah they cooked sticky rice, fetched plastic sheets and empty water bottles, preparing for a 20 km (12 miles), days-long trek in the monsoon rain through the mountains to the border.

“I am waiting for all of my relatives to leave together with my family as soon as possible,” said Abdullah.

Bangladesh is already host to more than 400,000 Rohingya refugees who have fled Buddhist-majority Myanmar since the early 1990s.

Around another 4,000 people were stranded in no man’s land between the two countries near Taung Bro village, where temporary shelters stretched for several hundred metres on a narrow strip between the Naf river and Myanmar’s border fence.

Many Rohingya trying to enter Bangladesh were sick and at least six have died after making the crossing, an aid worker said, adding that fear of being caught and sent back meant some refused to seek help.

Dr. Shaheen Abdur Rahman, a doctor at the Cox’s Bazar hospital in Bangladesh said 15 people have been admitted there since last week, all with gunshot wounds varying from grazes to one with bleeding in his lung. Four very serious cases were referred to the regional city of Chittagong.

Injuries also included fractures that could be from beatings or accidental falls while fleeing, he said.

“We don’t discriminate. Everyone coming to this hospital, whether they’re Bangladeshi or not from Bangladesh, we provide due service to them….we know there’s unrest in the neighbouring country so we are ready for this,” said Rahman.

Myanmar officials have said the country had come under attack and it had the full right to defend itself, adding that “security personnel have been instructed to make sure that innocent civilians are not harmed”.

Mine explosions and fighting continued, the government said, blaming Rohingya militants for burning down houses in the area. It said the militants ran back into the mountains after attacks.

Dionysus awaits once more in Limassol