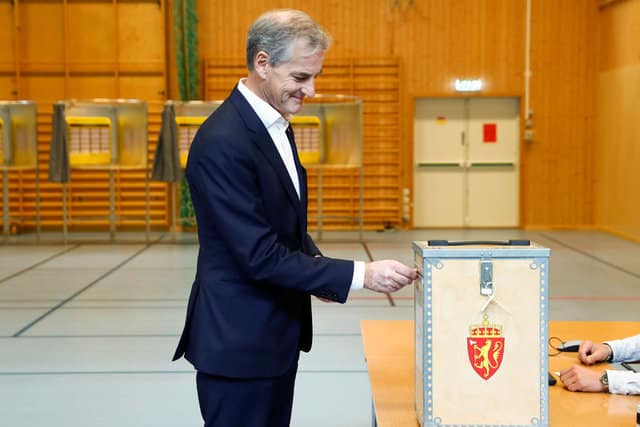 Norwegians voted on Monday on the second and final day of a parliamentary election that remains too close to call between Prime Minister Erna Solberg’s centre-right bloc and the centre-left opposition headed by the Labour Party.

Solberg’s Conservatives want to cut taxes in a bid to boost growth if they win a fresh mandate, while Labour leader Jonas Gahr Stoere seeks tax hikes to fund better public services such as education and healthcare.

The outcome could also impact Norway‘s oil industry, as either Solberg or Gahr Stoere is likely to depend on one or more small parties that seek to impose limits on exploration in Arctic waters off the northern coast.

Solberg, voting in the west coast city of Bergen, expressed cautious hopes of re-election. “The latest opinion polls show that it is within reach. But it’s very dependent on who’s managed to mobilise voters in the last days,” she said.

Adding to the suspense are the formulas used to allocate seats under Norway‘s system of proportional representation, which give a boost to parties that clear a 4 percent hurdle.

Two left-wing parties and two on the right – as well as the Greens, who have not said which prime minister they would favour – are all close to this threshold, opinion polls show.

“This can tip the scale one way or the other,” said Professor Toril Aalberg of the Norwegian University of Science and Technology.

For much of the year, Labour and its allies were ahead in the polls and favoured to win a clear victory, but support for the government has risen as the economy gradually recovered from a slump in the price of crude oil, Norway‘s top export.

Unemployment, which a year ago hit a 20-year high of 5 per cent, has since declined to 4.3 per cent, while consumer confidence is at a 10-year high.

Exit polls and forecasts based on early votes by about a quarter of the electorate will be made public on Monday at 1900 GMT, and most other ballots will be counted in the following hours. In the case of an exceptionally tight race the wait could last until late Tuesday.

Opinion polls in September on average have given Solberg and three other right-leaning parties a total of 85 seats in the 169-member parliament, just enough for a majority, while Labour and parties on the centre and the left are expected to secure 84 seats.

The election winner will face tricky coalition negotiations and will have to meet tough demands from the smaller parties to keep their support over the next four years.

The Greens, who averaged 4.0 per cent in September polls, want to end all oil exploration, citing concerns over climate change and pollution, while other smaller parties that may be involved in coalition talks also want to limit the award of new exploration acreage.

Or the far-left the Reds are anti-Nato and want far wider public control of the economy. “We must bring down differences and secure more equality,” party leader Bjoernar Moxnes of the Reds told independent TV2 as he voted on Monday.

“It’s exciting, and extremely close, so it’s important for all to vote. Every ballot counts,” Finance Minister Siv Jensen of the right-wing Progress Party told TV2 on Sunday.

Campaigning ahead of the final day, Labour’s Gahr Stoere expressed hopes of a late rally to clinch the election. “Thousands of voters are still undecided,” he told reporters.

Norway‘s problems are small by the standards of most nations.

The country has a sovereign wealth fund of almost $1 trillion, the world’s biggest, and tops UN lists of the best country in which to live, based on issues such as personal earnings and education.

It even rose to first, from fourth, in a 2017 survey that ranked nations by happiness.