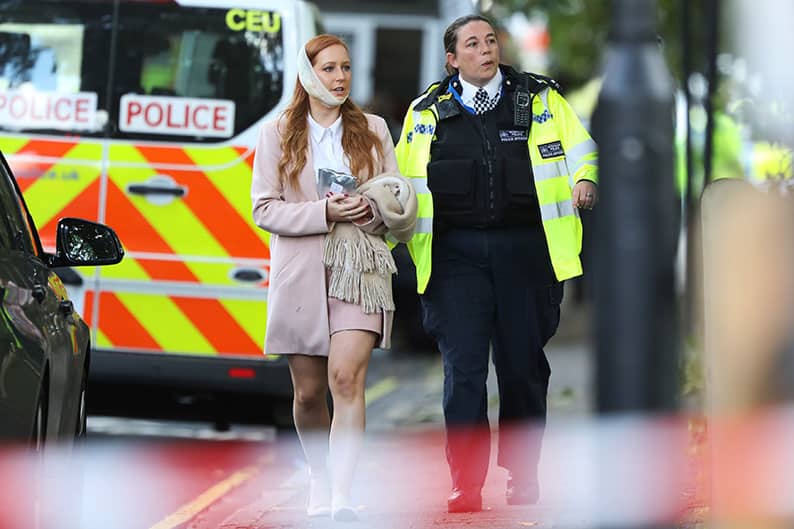 A home-made bomb on a packed rush-hour commuter train in London engulfed a carriage in flames and injured 29 people on Friday, but apparently failed to fully explode, in Britain’s fifth major terrorism incident this year.

Passengers heading into the British capital fled in panic after the blast as the train was about to depart Parsons Green station in West London at 8:20 a.m.

Some suffered burns and others were injured in a stampede to escape the station, one of the above-ground stops on the underground “Tube” network, but health officials said none were thought to be in a serious condition.

“We are chasing down suspects,” said Britain’s top counter-terrorism officer, Mark Rowley. “Somebody has planted this improvised explosive device on the Tube: we have to be open-minded at this stage about him and about potential associates.”

Hundreds of detectives and intelligence officials were involved in the manhunt. Rowley declined to say if the suspected bomber had been on the train.

Prime Minister Theresa May returned to London to chair a meeting of the government’s emergency response committee. She called the incident a “cowardly attack” and said the national threat level had been raised a notch to its highest level, “critical”.

The Islamic State militant group, which has said it was behind several attacks on Western cities in recent years, including two attacks in London and one in Manchester this year, claimed responsibility through its news agency, Amaq.

It was impossible to verify the claim, for which Amaq offered no evidence. Western intelligence officials have questioned similar claims in the past, saying that while Islamic State’s jihadist ideology may have inspired some attackers, there is scant evidence that it has orchestrated attacks.

“It is very routine in these sort of circumstances for IS to claim responsibility, whether or not they have had any previous engagement with the individuals involved,” Rowley said.

Pictures taken at the scene showed a slightly charred white bucket with a supermarket freezer bag on the floor of one train carriage. The bucket, still intact, was in flames and there appeared to be wires coming out of the top.

“I was on the second carriage from the back. I just heard a kind of ‘whoosh’. I looked up and saw the whole carriage engulfed in flames making its way towards me,” Ola Fayankinnu, who was on the train, told Reuters.

“There were phones, hats, bags all over the place and when I looked back I saw a bag with flames.”

Charlie Craven said he had just got on the train when the device exploded.

“Literally within three seconds of putting your bag down, the doors just closing, we hear a loud explosion,” he told Reuters. “I looked around and saw this massive fireball … coming down the carriage.”

He said terrified passengers fled, fearing a second explosion or a gunman, with people being knocked to the ground and crushed in the stampede to escape.

Outside the station, a woman was carried off on a stretcher with her legs covered in a foil blanket while others were led away swathed in bandages. The health service said 29 people had been treated in hospital, many suffering from flash burns.

In 2005, 52 people were killed when four British Islamists carried out suicide bomb attacks on three London underground trains and a bus, and this year Britain has suffered four attacks that killed a total of 36 people.

“Another attack in London by a loser terrorist,” U.S. President Donald Trump said on Twitter. “These are sick and demented people who were in the sights of Scotland Yard. Must be proactive!”

His comment that the suspect was known to London police carried echoes of the Manchester attack in May, when British police were infuriated by U.S. authorities leaking details of the investigation, including the name of the main suspect, to media.

Asked about Trump’s tweet, May said: “I never think it’s helpful for anybody to speculate on what is an ongoing investigation.”

Others were more directly critical of Trump. “True or not – and I’m sure he doesn’t know – this is so unhelpful from leader of our ally and intelligence partner,” May’s former chief of staff Nick Timothy tweeted.

A U.S. law enforcement official and a U.S. intelligence source, speaking on condition of anonymity, said the attack might have been carried out in response to recent Islamic State video messages urging would-be militants to attack trains and other public transport.

One of the officials said the device’s rudimentary design suggested the attack had not been carried out by a trained cell.

“The flash flame reported suggests that the ‘explosion’ was only partly successful,” he said. “I must speculate that either the mixture was not of the right composition or that the ignition system was inadequate or not properly placed.”

UK security services believe those behind some of the militant incidents in Britain this year were probably acting alone, radicalised by online material.

In March, a man drove a car into pedestrians on London’s Westminster Bridge, killing four, before he stabbed a policeman to death outside parliament.

A further 22 people were killed in a suicide bombing at a pop concert in Manchester in May and the following month, three Islamist militants drove into pedestrians on London Bridge before stabbing people at nearby restaurants and bars, killing eight.

In June, a van was driven into worshippers near a mosque in north London, which left one man dead.

Figures released on Thursday showed there had been a record number of terrorism-related arrests in Britain in the past year.

In the three years to March this year, police foiled 13 potential attacks, Rowley said this week. But the next 17 weeks saw the four attacks in London and Manchester, while the authorities thwarted six others.