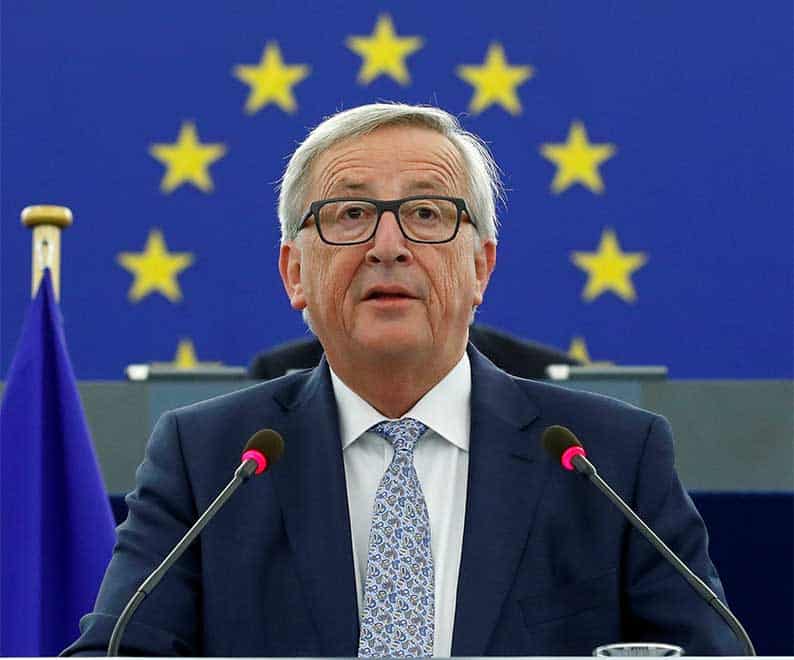 If a Cypriot president had to do the same it would be called the state of disunion address. A state of the union speech in Cyprus seems remote, but hope springs eternal.

As for Jean Claude Juncker’s state of the union homily, he had obviously read Macmillan’s winds of change speech on Britain’s departure from Africa or had been on a sailing holiday in the summer – the speech was laced with sailing metaphors to a fault.

There was he said a ‘wind of change’ in the economic outlook and a belief that ‘the wind is back in Europe’s sails’ and that the EU should not miss the ‘window of opportunity to catch the wind in her sails’. His excessive use of English idiom was deliberate and his motives either mixed or mixed-up.

But the address was not all wind and sails. He also said that Britain would regret Brexit; Poland and Hungary should watch their authoritarian tendencies, and that Turkey was so authoritarian she would not be joining the EU in the foreseeable future. A touch unfair perhaps as Turkey moved away from the EU because the EU was insincere about wanting her to join at all. On the other hand there is no doubt that President Erdogan has put many journalists in prison and tempted the gods by insulting Germany and the Netherlands – childishly calling them Nazis and fascists.

Although Turkey is not going to join the EU, the European Parliament voted to adopt Turkish as an official language, thanks to President Anastasiades. If in the end Turkish does become the twenty fifth language of the EU, Anastasiades would at one fell swoop have done more to get Turkish people close to Europe than anyone else since Ataturk changed the alphabet from Arabic to Latin in 1928.

Unfortunately, the way things are going the present government in Turkey may reverse Ataturk’s European orientation even to the extent of going back to the Arabic script. It would be hubris for Erdogan to do so but as always with hubris it cannot be ruled out, and if he goes that far it will lead to his downfall. Secular Turks will not go along with such a literary earthquake.

President Erdogan may look askance at Ataturk’s European direction but the die is cast among Turkish Cypriots. They want to remain EU citizens, and as they are of a grateful disposition they recognise they owe Anastasiades a debt of gratitude on behalf of the Turkish language whatever doubts his recent volte face have caused them to feel about how genuine he really is.

But to be fair, what was Anastasiades to do at Crans-Montana given he had Russia and the Greek foreign minister over his shoulder – both dead against a deal – and the need to outmanoeuvre the pseudo patriots on his flanks? Mustafa Akinci knows that these pseudo patriots cannot defeat Anastasiades unless they play the nationalist card, and play it they did for all it was worth. So he did a double-take during the talks and reclaimed the patriotic mantle by adopting a strategy of first things first like every good chess player does when he can see that he can force a check-mate in a number of beautiful moves if done in the correct sequence.

The pseudos have all now been check-mated. As for the hapless Malas, he and Akel would be very happy to go to the second round and lose. Akel’s mission in these elections is to get Anastasiades elected without seeming to support him; and Malas is prepared to run as Akel’s stalking horse and return to splendid hibernation from whence he came.

In 1967 Cyrus Vance, a former US under-secretary of state, later to become secretary of state under President Carter, engaged in shuttle diplomacy between Ankara, Nicosia and Athens and helped defuse a threatened intervention by Turkey in Cyprus after a military operation carried out near the Larnaca-Limassol road by the Greek Cypriot national guard. It was a tricky mediation at the end of which Cyrus Vance said, memorably, that the role of a mediator is to provide the weaker side with a ladder to climb down.

The UN secretary-general did something similar at Crans-Montana last July with his compromise proposals. He provided a ladder to enable the Greek side to climb down from their high horse of zero guarantees and zero troops. He knew the Turkish side was not stuck in a rut on guarantees and that it was prepared to reduce its military commitment provided it got something in return –  a rotating presidency perhaps –  to enable it to sell the deal back in Turkey and north Cyprus.

In this part of the world face is hugely important and loss of face is to be avoided at all costs. Anastasiades’ stance that he accepts the UN secretary-general’s guidelines itself is a public relations formula for saving face to cover up a climbdown.

The Turkish side has yet to lose face, although in its relationship with the Republic of Cyprus since 1960, the leadership of the Turkish Cypriot community made two strategic errors. It allowed itself to be marginalised over the sovereignty of the republic and it failed to encourage Turkey to comply with her obligations to restore the state of affairs established with the 1960 independence treaties upon which joint sovereignty was based. It is about to make a third strategic mistake.

I would give Turkey under President Erdogan a wide berth, stay close to Europe and give Anastasiades another chance for his services to the Turkish language.

Roll on the car revolution

The Remoaners whinge on, and on