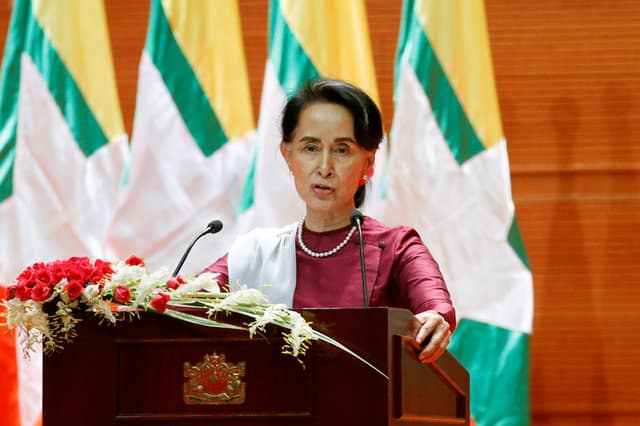 Myanmar leader Aung San Suu Kyi condemned on Tuesday any human rights violations in troubled Rakhine State and said anyone responsible would face the law, and that she felt deeply for the suffering of everyone caught up in the conflict there.

The Nobel Peace laureate’s remarks came in her first address to the nation since attacks by Rohingya Muslim insurgents on Aug 25 sparked a military response that has forced more than 410,000 Rohingya into neighbouring Bangladesh.

Western diplomats and aid officials attending the address welcomed Suu Kyi’s message, though some doubted if she had said enough to end the barrage of global criticism Myanmar has faced.

Human rights groups were dismissive. Amnesty International said Suu Kyi and her government were “burying their heads in the sand” for ignoring the role of the army in the violence.

The United Nations has branded the military operation in the western state ethnic cleansing. Suu Kyi did not address that but said her government was committed to the rule of law.

“We condemn all human rights violations and unlawful violence. We are committed to the restoration of peace and stability and rule of law throughout the state,” Suu Kyi said in her address in the capital, Naypyitaw.

Long feted in the West for her role as champion of democracy in the Buddhist-majority country during years of military rule and house arrest, Suu Kyi has faced growing criticism for saying little about the abuses faced by the Rohingya.

“Action will be taken against all people regardless of their religion, race and political position, who go against the law of the land and violate human rights,” she said.

“We feel deeply for the suffering of all the people caught up in the conflict.”

The United States urged Myanmar on Monday to end military operations, grant humanitarian access, and commit to aiding the safe return of civilians to their homes.

Myanmar‘s generals remain in full charge of security and Suu Kyi did not comment on the military operation, except to say that there had been “no armed clashes and there have been no clearance operations” since Sept. 5.

“Nevertheless, we are concerned to hear that numbers of Muslims are fleeing across the border,” she said.

Rights monitors and fleeing Rohingya say the army and Rakhine Buddhist vigilantes have mounted a campaign of arson aimed at driving out the Muslim population.

Myanmar rejects that, saying its security forces are carrying out operations to defend against the insurgents of the Arakan Rohingya Salvation Army (ARSA), which has claimed responsibility for attacks on the security forces since October.

The government has declared ARSA a terrorist organisation and accused it of setting the fires and attacking civilians.

Referring to Suu Kyi’s assertion that army clearance operations had ceased, Phil Robertson of Human Rights Watch asked: “If that is true, then who is burning all the villages we’ve seen in the past two weeks?”

He said satellite images showed about half of all Rohingya villages had been torched and it was time that Suu Kyi, the government and military faced the fact that the security forces “don’t follow a code of conduct and shoot and kill who they want” and burn villages.

Amnesty International said there was “overwhelming evidence” the security forces were engaged in ethnic cleansing.

“While it was positive to hear Aung San Suu Kyi condemn human rights violations in Rakhine state, she is still silent about the role of the security forces,” the group said.

While foreign critics raised doubts, thousands of Suu Kyi’s cheering supporters gathered in the main city of Yangon and other towns to watch her speech broadcast on big screens.

The ambassador of China, which vies with the United States for influence in Myanmar, welcomed Suu Kyi’s speech saying it would improve understanding. Russia’s ambassador said there was no evidence of ethnic cleaning.

Suu Kyi, 72, said her government had been making every effort to promote harmony between the Muslim and largely Buddhist ethnic Rakhine communities.

A government official in Rakhine State did not seem to share Suu Kyi’s optimism about relations between the two communities.

“They have no trust for each other,” the state’s secretary, Tin Maung Swe, told Reuters, adding tension was high.

“The situation is ready to explode. It just needs a single spark.”

Suu Kyi said her government was committed to recommendations made by an advisory team led by former U.N. secretary-general Kofi Annan.

Annan’s panel recommended last month a review of a citizenship law that makes a link between citizenship and ethnicity and leaves most Rohingya stateless.

On the return of refugees, Suu Kyi said Myanmar was ready to start a verification process.

“Those who have been verified as refugees from this country will be accepted without any problem,” she said.

She referred to a 1993 agreement with Bangladesh on verification. But few refugees were able to return under what aid workers said was a lengthy, complex process.

Suu Kyi said diplomats could visit the conflict zone and she called for support for her government’s efforts to end conflict across the country.