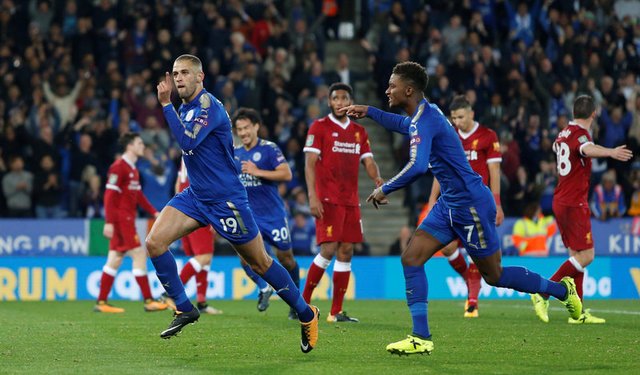 Leicester City grabbed second-half goals through Shinji Okazaki and record signing Islam Slimani to earn a 2-0 victory over Liverpool in the League Cup third round on Tuesday.

Mark Hughes’s Stoke City were the other top-flight victims, going down 2-0 at second-tier Bristol City.

Tottenham Hotspur were frustrated for 65 minutes at Wembley by second-tier Barnsley before Dele Alli secured a 1-0 win and a first domestic victory of the season at their temporary home.

Liverpool’s Alex Oxlade-Chamberlain was given his first start by manager Juergen Klopp following his move from Arsenal, while Phillipe Coutinho was also in the lineup at the King Power Stadium where the visitors dominated play before the interval.

Coutinho was instrumental in eight-times League Cup winners Liverpool’s superiority but he went off at halftime with the score still level and after the break Liverpool paid dearly for failing to take their chances.

Klopp’s side did not deal with a corner in the 65th minute and Okazaki’s deflected shot crept inside the post. Algerian Slimani scored the home side’s second goal with a stunning left-foot shot into the top corner in the 78th.

“We led a charmed life in the first half and Liverpool could have been out of sight,” Leicester manager Craig Shakespeare said. “To get the first goal was massively important.”

The teams meet again at the weekend in the Premier League.

For excitement, Burnley’s Turf Moor was the place to be.

Leeds went ahead in the 80th through Hadi Sacko but Burnley got a lifeline with an 89th-minute penalty by Chris Wood.

Leeds looked to have won when Pablo Hernandez also scored a penalty in the fourth minute of added time but Robbie Brady’s free kick levelled it up with the last kick of normal time.

The visitors were perfect in the shootout, however, while James Tarkowski missed for Burnley.

Bristol City’s Famara Diedhiou and Matty Taylor were on target at home to Stoke, while Palace found some respite after losing all five of their league games to edge past top-flight rivals Huddersfield thanks to Bakary Sako’s early goal.

Bristol Rovers, one of two third-tier clubs in round three, went down 1-0 to Wolverhampton Wanderers after extra time.