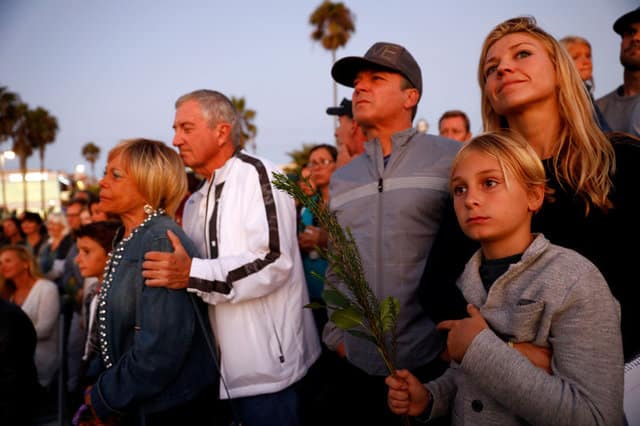 Republican lawmakers on Thursday said they would look into “bump stock” gun accessories after a retiree used rifles equipped with them to rain gunfire onto a Las Vegas concert, killing 58 people in the deadliest mass shooting in modern US history.

The influential National Rifle Association, which has opposed efforts to pass federal gun legislation following past mass shootings, said it would not oppose the move. It said the devices that allow semi-automatic rifles to behave as fully automatic weapons should be subject to additional regulations.

Investigators struggled to understand why Stephen Paddock, 64, assembled an arsenal of nearly 50 firearms and used them to spray bullets from the 32nd floor of a Las Vegas Strip hotel into a crowd of country-music fans on Sunday before killing himself. Twelve rifles found in Paddock’s hotel room had bump stocks, authorities said. The shooting spree also injured 489 people.

Reports also emerged on Thursday that Paddock, a gambling and cruise enthusiast, may have looked into carrying out an attack in Chicago or Boston.

Audio and video of the Sunday night attack contained the sound of extended periods of continuous gunfire into a crowd of terrified people, stirring the long-standing US debate over how to regulate gun ownership, which is protected by the Second Amendment of the US Constitution.

Senior Republicans on Thursday signalled they were ready to examine the sale of “bump stocks.” The devices essentially allow legal rifles to serve as automatic weapons, which are largely illegal in the United States.

“Clearly that’s something we need to look into,” House Speaker Paul Ryan told radio talk show host Hugh Hewitt, referring to the accessories. “I didn’t even know what they were until this week … I think we’re quickly coming up to speed with what this is.”

The No 2 Republican senator a day earlier had called for a review of bump stocks while Democrats had already been urging new legislation.

Before the Las Vegas attack, a man named Stephen Paddock booked rooms in a Chicago hotel that overlooked the site of the August Lollapalooza music festival, a spokeswoman for Chicago’s Blackstone Hotel said in an e-mail. It was unclear if that person, who never checked in, was the same Stephen Paddock, the spokeswoman said.

Police in Boston and Chicago said they were aware of the reports and investigating them.

The Federal Bureau of Investigation said on Wednesday there remained no evidence indicating the shooting spree was an act of terrorism.

Paddock’s girlfriend, Marilou Danley, was questioned by the FBI on Wednesday and said in a statement she had been unaware of Paddock’s plans.

“He never said anything to me or took any action that I was aware of that I understood in any way to be a warning that something horrible like this was going to happen,” Danley, 62, said in the statement released by her lawyer, Matt Lombard.

Danley, who returned late Tuesday from a family visit to the Philippines, is regarded by investigators as a “person of interest.” Lombard said his client, an Australian citizen of Filipino heritage, was cooperating fully with authorities.

An FBI official in Las Vegas said no one has been taken into custody.

Danley shared Paddock’s home at a retirement community in Mesquite, Nevada, northeast of Las Vegas, before traveling to the Philippines in mid-September.

Investigators questioned her about Paddock’s weapons purchases, a $100,000 wire transfer to a Philippine bank that appeared to be intended for her, and whether she saw any changes in his behavior before she left the United States.

Danley said Paddock had bought her an airline ticket to visit her family and wired her money to purchase property there, leading her to worry he might be planning to break up with her.

Discerning Paddock’s motive has proven especially baffling as he had no criminal record, no known history of mental illness and no outward signs of social disaffection, political discontent or extremist ideology, police said.