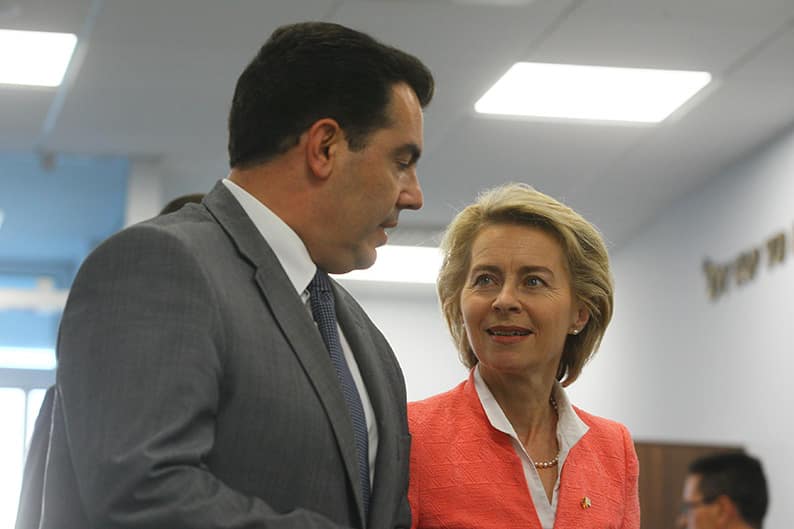 Chairman of the Free Democratic Party (FDP) Christian Lindner, leader of the Christian Democratic Union of Germany (CDU) Angela Merkel, leader of the German Green Party Katrin Goering-Eckardt and Chief of Staff of the German Chancellery Peter Altmaier are seen on a balcony of German Parliamentary Society offices during the exploratory talks about forming a new coalition government held by CDU/CSU in Berlin

German conservatives, Greens and Free Democrats dove into fresh talks on a coalition on Monday after a high-level meeting with Chancellor Angela Merkel that participants said had cleared the air among potential partners.

Merkel, whose conservative alliance came first but lost seats in the Sept 24 national election, is trying to forge a tricky three-way alliance with the pro-business FDP and environmentalist Greens that is untested at a national level.

Horst Seehofer, head of the Bavarian sister party of Merkel’s conservatives, said Sunday’s huddle among party leaders at his state’s Berlin headquarters had helped “change the atmosphere” after last week’s round ran into trouble over immigration policy and moves to combat climate change.

“We have to – and we want to – build a stable government. To do that, we have have to formulate a substantive future plan,” he said, urging negotiators to keep talking in private but tone down public comments seen by some as divisive sniping.

Katrin Goering-Eckardt, a top negotiator with the Greens who also participated, said Sunday’s gathering had smoothed the waters for now. “Now we’ll have to see if it has any effect on the talks this week,” she said.

Peter Tauber, secretary general of Merkel’s Christian Democrats (CDU), said sideline comments last week and over the weekend had been unhelpful, but he viewed the current atmosphere as “positive and constructive.

“Those who are sitting together here are really determined to get to a good result for our country for the next four years and beyond,” he said in a video on the party’s website.

Monday’s exploratory talks – the first of four sessions planned this week – will focus on less contentious issues such as education, digitalisation, pensions and labour issues, as well as domestic security.

The possible coalition partners remain at odds over how to meet carbon dioxide emission targets and whether to cap migration.

Many conservatives want to take a harder line on immigration, blaming their election setback on Merkel’s decision to allow in more than a million migrants in 2015 and 2016. They want to limit refugee numbers, but the Greens reject such a cap.

Volker Kauder, parliamentary leader of the conservatives, told broadcaster ZDF on Sunday evening it was important to demonstrate that the mainstream parties could govern – a clear nod to the protest votes that gave the far-right Alternative for Germany party seats in parliament for the first time.

Kauder appealed to the negotiators to keep the larger goal in mind. “It’s about more than the individual party positions, it’s about building trust in the ability of the democratic parties to take action,” Kauder said.

The three blocs are also nearing agreement on the issue of legalising marijuana through pharmacies or other licensed distributors, the Stuttgarter Zeitung newspaper reported.