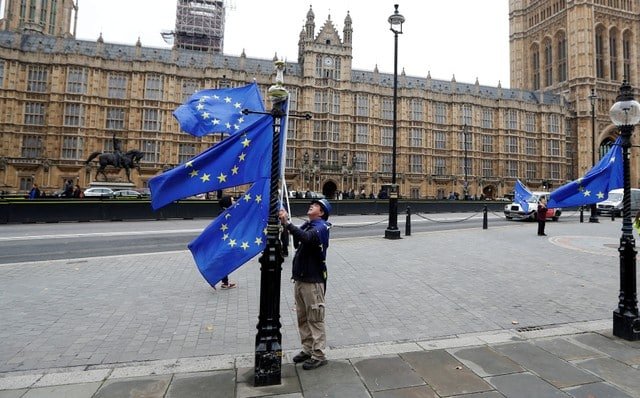 Britain is accelerating preparations for “all eventualities” when it leaves the EU, but both sides are hopeful that an agreement on stepping up talks to unravel more than 40 years of partnership will be sealed soon.

With only 17 months remaining until Britain‘s expected departure, the slow pace of talks has increased the possibility of it leaving without a deal, alarming business leaders who say time is running out for them to make investment decisions.

British and EU negotiators met in Brussels on Tuesday to try to agree a schedule for further divorce talks, with an initial proposal from the bloc to hold three more rounds before the end of the year not winning instant approval from London.

The pressure has spurred the British government to step up its Brexit plans, employing thousands more workers and spending millions to make sure customs posts, laws and systems work on day one of Brexit, even without a deal on a future relationship.

At a meeting with her ministers on Tuesday, Prime Minister Theresa May was updated on plans for the tax and customs authority to add a further 3,000-5,000 workers next year and for spending of 500 million pounds ($660.45m) for Brexit.

“Alongside the negotiations in Brussels, it is crucial that we are putting our own domestic preparations in place so that we are ready at the point that we leave the EU,” May’s spokesman told reporters.

“The preparatory work has seen a significant acceleration in recent months. Departments are preparing detailed delivery plans for each of the around 300 programmes underway across government.”

May wants to silence critics in her ruling Conservative Party who are pressing her to walk away from talks, which have faltered over how much Britain should pay to leave the bloc, and also to step up the negotiations.

Brexit campaigners are demanding that Britain leave with no deal if the talks do not move on beyond a discussion of the divorce settlement on a so-called Brexit bill, EU citizens rights and the border with EU member Ireland by December.

But in a sign that an improved tone between the two sides struck at a summit earlier this month was continuing, EU chief negotiator Michel Barnier reaffirmed his message in the Slovak capital Bratislava that he was ready to “speed up negotiations”.

“We have clearly proposed three (different dates) for new rounds. In the next few hours or days we’ll be working with British delegations to find the right dates because we need to work in a very intense way to find this agreement before December,” Barnier told reporters, in comments that supported sterling.

“The agenda for the new round of negotiations will be fixed within hours or days.”

May’s government has also long said it would welcome an acceleration in the talks. But the sides have yet to agree on how to do that following a top-level meeting in Brussels on Oct 19-20.

Barnier has proposed three rounds – one that did not take place last week, and two more in the weeks starting Nov 16 and Dec 4. London prefers “continued negotiations”.

“What does ‘continuous negotiations’ mean, we don’t know exactly. We are ready to accelerate but we must have something to talk about. We are very happy to increase the number of times we meet,” said an EU official.

This was what Britain‘s Oliver Robbins and Barnier’s deputy, Sabine Weyand, were seeking to agree in Brussels on Tuesday.

Before leaving the EU, May faces a struggle to get parliamentary support for a law to sever political, financial and legal ties with the bloc – the EU Withdrawal Bill, for which lawmakers have proposed hundreds of amendments.

Asked whether May was preparing to offer a concession over a final vote on any deal struck with the EU, her spokesman said there was “lots of speculation in relation to Brexit”.

“We’ve always said that we’ll do whatever is necessary,” he said.

Full Brexit yet to play out on British finance, lawmakers say